So life has changed for Escoffier who won the Volvo Ocean Race as a key member of the Dongfeng crew, the most recent race being his second crewed round the world race in the Dongfeng colours. Since July the focus has been learning, training and developing the IMOCA. He has just completed and excellent IMOCA debut, taking second place on the Rolex Fastnet race with Nicolas Lunven,
Escoffier has made a career change, leaving his position as director of the research and development department in Team Banque Populaire to strike out as a solo and short handed racer, looking to represent PRB on the upcoming Vendée Globe. He has had a short transition period, waiting for the renowned VPLP-Verdier designed PRB to become available after it has been used for training by Sébastien Simon while his new Juan K boat was completed and launched.
"Oddly the transition did not really feel that big or significant” Escoffier opens. “I'm going to Port-la-Forêt a bit more than before because the boat is there but I just feel I am drawing on the skills I've learned on my journey to get here. "
Saint Malo bred Escoffier is a mechanical and structural engineer by qualification who has accumulated a significant wealth of expertise in the design office of Team Banque Populaire where he was involved in the construction and optimization of two Imoca and two maxi-trimarans during the period 2006 to early 2019. 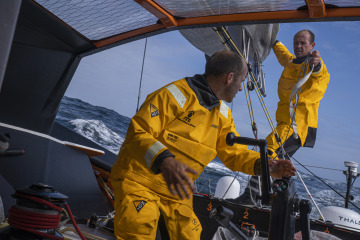 “Over my years at Bank Pop I acquired a pretty unique set of skills and experience even compared to those who are competitors in the Vendée Globe.” He explains, “But right now there’s a lot of work to be done with 18 months to go to the Vendée Globe. In some areas we are ahead of schedule working on the boat, but I have to deal with some of my weaker points, such as decision making when I am solo. I took advantage of the move from Banque Populaire as I went full-time with PRB and got a little time to catch up. I got some rest after the Fastnet, took lessons with JeanYves Bernot on navigation. I did a lot of work on the boat to get to know her and am ready for getting going again, setting up the project with people I am working with full time like Damien Guillou who will be the boat captain until the Vendée Globe. There is the schedule to sort out with the aim of getting out there sailing.”
Escoffier explains their current schedule, working up to the Transat Jacques Vabre. “The day to day stuff needs preparing and with that we need some rigour to organise things. For me that quest for rigour and reliability starts with a good timetable. The only thing we don’t have on our side right now is time. We have to decide when to work on the boat, when to sail, ensuring she is reliable. You don’t set off around the world alone without having done as many varied trials and testing periods as you can. So next up is the Azimut, sailing double-handed to prepare for the TJV. The aim is to do the return delivery from Salvador di Bahia  alone and then be 100% solo in 2020.”
He looks back at some of the key learnings from his time in a role which carried huge responsibility, “ I was used to taking decisions in the design office within the financial limits. I was lucky to work with skippers who trusted me completely. Those decisions affected others. Now it affects me directly when I will be alone out on the water. You prepare for yourself with some basic concepts. That’s why I took up this challenge. I wanted to take decisions for myself. At Banque Populaire, everything is well oiled. They have the resources and means, but here things are different. We took the boat out of the water to change a ram. I designed it myself to save money and because I like doing that sort of thing, and I can.”
Speaking about the highly optimised 2010 design which was Vincent Riou’s before he took over, Escoffier says, “I have a boat with a lot of potential. I must not feel frustrated. A lot can be done with things up to and including the foils that Vincent fitted. She won’t be a new boat, but I am trying to update her to close the gap.  And it terms of sailing I’m bound to have less experience than some people in terms of solo racing, but I have a lot of experience of sailing (round the world on a multihull, several transatlantic races, record attempts, the VOR (500,000 miles). I have nothing to be ashamed of and I’m trying to narrow the gap in terms of solo sailing.”
PRB skippers who raced the Vendée Globe: Jean-Yves Hasselin (1992); Isabelle Autissier (1996); Michel Desjoyeaux (2000, victory); Vincent Riou (2004 victory); Kevin Escoffier.
And…. The organisation of Vincent Riou manages the technical project for Kevin Escoffier and PRB; Kevin Escoffier is not new to PRB: he worked for the team when it was led by Jean-Marc Failler at the time of the construction of PRB 4 which was launched in 2006 through to the start of the Vendée Globe 2008.
Kevin Escoffier 2005: 1st place, Transat Jacques Vabre in Multi50 2009: Transatlantic and 24-hour speed record on Banque Populaire V 2012: 1st place, Krys Ocean Race with Spindrift Racing 2012: Jules Verne Trophy with Banque Populaire V 2014-15: 3rd place, Dongfeng Race Team, Volvo Ocean Race