Imagine finding yourself alone at the helm of a 60-foot monohull with a 180 m2 mainsail, a 140 m2 solent and a 100 m2 staysail with miles and miles of ropes, bags of sails everywhere and being soaked as you do the stacking, trim the sails and try to keep a cool head, if that is in fact possible. That can happen at any time during the day or night. You feel exhausted, as you are getting less and less sleep and the tiredness has been building up.

As autumn begins, Clarisse Crémer is still finding it tough, even after sailing a Mini and a Figaro, and she has used her muscles before with similar boats. Logically, learning about the physical aspects of IMOCA sailing is something that needs to be done. “The boat,” she says, “is a bit complicated, as you can easily make mistakes, but the really difficult matter is the physical aspect. IMOCAs are extremely demanding. You have to learn how to deal with three-quarters of an hour of hard work without wearing yourself out, as in the end, it’s a question of your safety.”

Since her first trips aboard Banque Populaire, the sailor from the Paris region has achieved quite a lot. “I am better now on the grinder and I have been preparing myself physically. Partly to build up my muscles, but more importantly to avoid injuring myself. When you are out at sea speeding along, stacking a 40kg sail which is even heavier because it is wet, you can so easily hurt yourself.”

Used to sailing solo, Clarisse has now learnt to look at suffering differently. “On a Mini or Figaro, the more it hurts, the better your chances of performing well. On an Imoca, when it hurts, it is highly likely that you have done something silly. In any case, that is how it feels at the moment.” 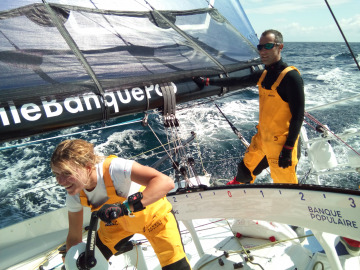 “I don’t have the physical ability of Armel or Paul”

The sailor has one year left to get ready for the solo round the world voyage. Taking it one step at a time, she is gradually getting there. “I am convinced that by the time we get to the Vendée Globe, I shall have improved a lot. Everything should start to come naturally aboard the boat, which will allow me to plan ahead and therefore not have to deal with things that for now are being thrown at me. It is the physical aspect that I still find the toughest, but I am going to learn how to cope with that. We’ll be improving the systems, changing the direction of the grinder so that it is no longer off centre, putting in place blocks to make things easier, choosing the sails and where to put them on the deck. The former SMA is not known as the hardest boat, but I don’t have the physical ability of Paul Meilhat (the previous skipper) or Armel (Le Cléac’h). But there is no magic solution. When you have to stack, you have to stack.”

The physical aspect is also the way you look at a boat in given conditions. Clarisse and Armel Le Cléac’h have been training for the Transat Jacques Vabre Normandie Le Havre, but she has sailed as if alone, even though so far, she has not really been by herself on Banque Populaire. “I can’t wait for that moment! I still find it hard to think she is my boat. Carrying out a manoeuvre as if alone but with four people aboard, when you just have to push a button to get some help is not the same thing as really being alone.” She is going to have to wait a few months more until the return from The Transat Bakerly to find herself really alone.

Above all avoid making any comparisons

For now she is focusing on the Transat Jacques Vabre which she will be taking part in while having a Master Class with Armel Le Cléac’h, the winner of the 2016-2017 Vendée Globe, who continues to impress her, even if that is far from being his intention. “I am amazed by his sailing,” said Clarisse. “I can’t help it, but I have to get rid of this complex that I sometimes have when changing the sails or trimming as he sleeps. It requires a lot of effort to tell myself, ‘Go on, Clarisse, it doesn’t matter if you can’t do it as well as Armel’. Armel amazes me when I’m struggling hard, as he just does it effortlessly. It’s down to his physique, his nature, but also to his experience. He already has three Vendée Globe races under his belt. I really have to avoid comparing myself to him all the time. If I do that, I’ll never manage to get anywhere.”