Vendée-Arctique-Les Sables: A First Among Equals

The inaugural Vendée-Arctique-Les Sables race proved to be a close match to the very end, a continuous tussle between Jérémie Beyou, Charlie Dalin and Thomas Ruyant, leading a fleet that generally lasted the course.

While the newest generation of foilers, as they should have, led the charge the older boats all very much stayed with the pace.

The first adventure into the high northern latitudes for the IMOCA class, at five months to go until the Vendée Globe, gave the skippers what they needed and wanted, all in need of a dress rehearsal. And they all got what they wanted, and more.

When they left the pontoons, a little more than ten days earlier, they wore masks, some looking particularly anxious and nervous, but all were especially keen to get back on the water after the protracted lock down.

The 20 strong fleet was made up of skippers preparing to participate in the Vendée Globe who needed a replacement race because of the cancellation of two events  - The Transat (planned for May 10) and New York - Les Sables (due to start June 16)  - because of the Covid-19 pandemic.

"Time was really starting to run out," recalled Charlie  Dalin  who finished second.  "Races like this really help us to be ready," adds Thomas  Ruyant  who was third.

Rather than a straightforward Transat, for the first time they measured themselves on an unusual course, a climb northwards to the south-west of Iceland, before returning south into the heart of the Atlantic to a virtual buoy located on the same latitude as Les Sables d'Olonne.

"The route was interesting from both a strategy and a meteorological point of view," agreed Kevin Escoffier who was fifth. “Over ten days, we had a really intense condensed period of transition phases. We couldn't have asked for a better workout. This was what we needed before going to the Vendée Globe.” 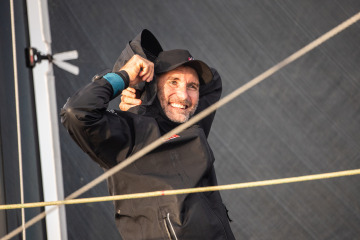 © © Eloi Stichelbaut - polaRYSE / IMOCAThe race also proved an insight into the form of the top seeds. There were no surprises in that respect int that the latest generation foilers dominated -  the VPLP designed Charal  (Beyou),  and the Verdier designed pair Apivia (Dalin) and  LinkedOut   (Ruyant) – were all in the match. But what was striking was the intensity of the battle between the trio. All took turns in the lead of the race and all pushed hard to the end, leaving nothing on the race course. The final, breathtaking sprint saw averages at more than 20 knots of boat speeds. At the finish,  Beyou beat long time Figaro rival Dalin  by  only 50 minutes and  Ruyant  by 70 minutes minutes!

"Charlie and Thomas and I, we raced together. There have been reversals of situations but in essence we have hardly ever left sight of each other " recalled  Beyou, who crossed the line after 10 days, 5 hours and 14 minutes of racing to take victory.

"We never let go of each other." adds Dalin, who highlighted the lack of comfort on board. “The Vendée Globe is seven times longer so we'll have to learn to resist the shocks.”

Ruyant  agrees: "The rest phases are more difficult to take and benefit from and they will be even more important to the way we are going to race than before.  »

Boats of older generations up there too, and racing close to each other 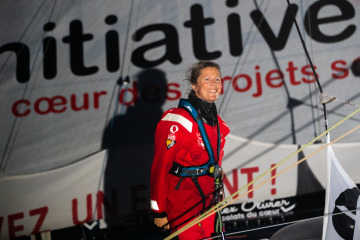 © © Eloi Stichelbaut - polaRYSE / IMOCABehind the top three ‘class of 2020’ boats the older generations were in contention, certainly not out of touch. Less than 20 minutes after the finish of Thomas  Ruyant, Samantha Davies (Initiatives Coeur) finished fourth, an hour ahead of Kevin Escoffier (5the, PRB) and three hours up on Yannick  Bestaven  (6th, Maitre CoQ IV) and Boris Herrmann (7th,  SeaExplorer-Yacht Club of Monaco). Their boats were launched in 2010, 2009 and 2015 respectively.

"It's great to be top of the old generation IMOCA,"  says Davies.

"There were three boats in front that were playing for the win and from time to time we got close to them but we had a great fight between us.” sums up Kévin Escoffier.

A fleet with depth and strength

Just as for the Vendée Globe itself there was interest and enthusiasm spread through the fleet. There were just three abandonments, Sébastien Simon (Arkéa-Paprec broke the starboard foil), Damien Seguin (Group APICIL, broke his alternator mount)  and Armel  Tripon  (L'Occitane en Provence hull damage).

And so for them just as for all the IMOCA skippers, the final prep phase begins, a time trial where nothing can be overlooked as we approach start day  November  8th.

An organization which dealt with the challenges

In a very particular context the IMOCA class deserves credit. With the support of the whole offshore racing community they were able to obtain the authorizations to relaunch offshore sailing competition.

They had to reassure that ocean racing could enforce strict health protocols. In the end, the start and finish villages were absent, and missed as was the descent and ascent of the Les Sables d’Olonne channel  but the race kept its promises and the event had a very encouraging following.

The Vendée – Arctique- Les Sables d'Olonne proved a great warm up, a dress rehearsal which allowed the organisers and the class to work through a difficult, restricted  scenario which proved a winning result for all.