Attracting more than half of the Imoca fleet that is registered for the Vendée Globe, the Lorient based 10th edition of the Défi Azimut delivered a number of surprises, even if the winner of the main, 500 miles offshore race proved to be the same as the recent Vendée-Arctique-Les Sables d’Olonne, Jérémie Beyou (Charal).

The event has been organised by Jean-Marie Corteville since 2011 as an exclusively Imoca event. This time it is the last racing event before November’s start to the solo, non stop race around the world race. The format, covering three different types of courses, offers a useful, menu with fun, entertaining but informative aspects.

The event starter is timed Speed Runs, the main course is a 48 hour 500 miles offshore triangle, and the dessert a fun tour of the Island de Groix. 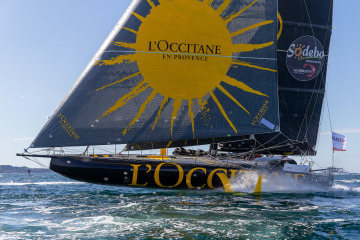 © Jean-Marie Liot / Défi AzimutThe newest boat in the fleet, the Sam Manuard designed scow bowed, L'Occitane en Provence proved quickest on the speed runs. After the technical setbacks in July the reinforced, repaired IMOCA of Armel Tripon was the best on the speed runs, with a time of 3'05  on the half mile straight line track which all the IMOCAs ran on the Wednesday. That equated to 23.35 knots in a building wind, slightly better than Thomas Ruyant (LinkedOut) and Sébastien Simon (Arkéa-Paprec) who completed the podium. 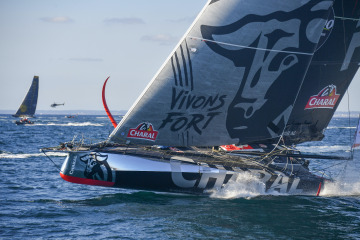 © Christophe Favreau / Défi AzimutBut several of the skippers returned to the dock pleased with their overall performance around most of the 500 miles triangle course but disappointed with their result. There was a glassy calm which affected the final hours which upset the established hierarchy. For 42 hours they raced in ideal conditions, up to 20kts at times on the main downwind stage which took the fleet offshore out to sea at top speeds. At the first buoy the latest generation foilers were out in front with Charlie Dalin (Apivia) ahead of Jérémie Beyou (Charal), in third Thomas Ruyant (LinkedOut), Armel Tripon (L’Occitane en Provence), Sébastien Simon (Arkéa-Paprec) and Kevin Escoffier (PRB). That order remained unchanged at the second mark.

But, as per the forecast, the wind died right down as the fleet sailed upwind towards Lorient. As the pack regrouped, three times La Solitaire champion Jérémie Beyou found a breath of breeze and escaped to win as the other leaders remained glued to the sea. Sam Davies (Initiatives Coeur) sneaked through to take second with Isablle Joschke (MACSF) in third and Clarisse Crémer (Banque Populaire) fourth, making it a very good day for the women. 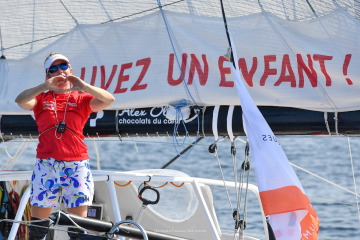 © Christophe Favreau / Défi Azimut“These 48 hours are a great confidence boost before the Vendée Globe even if the flat sea conditions are very different,” smiled Samantha Davies on Saturday morning. “It is still a treat to sail on these boats which are magnificent, especially when they are fully prepared. Everything is going really well. We went fast and in the right direction. And it’s a great team effort to finish in a good position, I’m delighted with the boat and our preparation ”.

"I am super happy, it was a very nice race with great conditions, it has been a long time since we sailed in such lovely weather," enthused Isabelle Joschke. “ I am happy. I struggled from start to finish but was obviously successful passing the island of Groix then with something more akin to a  La Solitaire du Figaro finish. I took advantage of the situation, I came to the right place, and here I am on the podium. A little bit of luck helps in the end.”

Clarisse Crémer: "I had a great duel with Isabelle (Joschke) and it was a good race! There were a lot of great moments, and I'm really happy. It was a bit unexpected to finish fourth but I tell myself that we must take advantage of the chances when we get them. I feel good on my boat, in fact all the time better and better! "

Cherry on the top for Escoffier 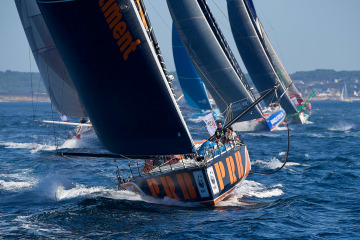 © Yvan Zedda / Défi AzimutOn the Sunday, Kevin Escoffier (PRB) won the Tour de l'île de Groix ahead of Charlie Dalin (Apivia) and Maxime Sorel (V and B - Mayenne), in 2:29, a happy conclusion to four days of racing. Less than two months before the start of the Vendée Globe, one thing has been taken for granted: the favorites have no right to make mistakes, the outsiders are hungry!