She has already sailed around the world two handed on a Class 40 as well as competing in all the major French solo and short handed ocean races. She gave up a promising career in advertising to sail professionally. And she believes the time is now right for her to take on the Vendée Globe. Meet England’s Miranda Merron.

Your first ocean sailing trip: Where, when, circumstances? "Transatlantic crossing west-east in 1979 on Manitou IV my parents' C&C 39 (winner of the Canada Cup in 1969 - the boat, not my parents). The reason was my father taking up a new job in England after 4 years in Canada. Left Oakville, headed for the Erie Canal, then Hudson River to New York, out past Ambrose Light, passed Lizard Pt after 19 days, 22 hours, 37 minutes..."
How and why did you decide you wanted to be involved in ocean racing? "My mother took me to a talk given by Naomi James when I was 10 or 11... Also I was allowed to visit Kialoa IV (?) in Cowes when I was 10, after our transatlantic crossing, so I must have been interested if I can remember it that well! However, I didn't sail at all from the ages of 16 - 19, and got back into dinghy racing once at university". 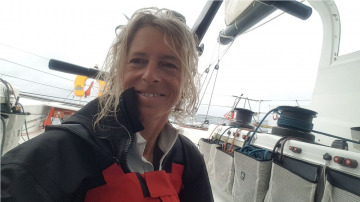 © Campagne de FranceAt what point exactly did this become the main focus for you? "A couple of years after I had left my job in advertising and had started racing on good boats having walked the dock to get rides. In those days, that was how you got rides on boats. I had become friends with Lisa Charles (via the beer tent, not on a boat), and she was on Royal & SunAlliance at the time. She suggested I apply and that was the definitive end to any further thoughts of going back to advertising!"
Which result or experience are you most proud of? "In a team - what we achieved on Royal & SunAlliance before dismasting; and solo - the 2014 Route du Rhum where I finished 6th Class40 out of a fleet of 43 starters."

What do you see as your main quality? Endurance
And your biggest shortcoming? Too many to list! Not very good at electricity
If you were an animal, what would you be? A sloth. Right now that state of being is rather appealing.
If you were a plant, what would you be? I have a fascination and interest in venus flycatchers but I would not want to be one.
If you were a piece of music…? I am a child of the 60’s 70s and 80s so something from then.
What is your favourite colour? British Racing Green
What do you dream of that would make you happiest? To be honest I am very happy right now, I have a great partner in Halvard and a great programme, though like I said being able to be a tree sloth and just hang off a tree contemplating things is appealing right now but that is a reflection on the intensity of everything going on now! I am very happy.
Who is your biggest hero? Sir Peter Blake, I don’t think I need to say anything other than he was a legend, and Naomi James, like I said I remember that talk of hers that I went to like it was yesterday and it so inspired me.
Your favourite saying? If my aunt had b***s,  (balls) she'd be my uncle (courtesy of the late Johnny Pekelharing, former Argentine Olympic sailor who was the Junior Club Nautico coach in Puerto Rico where we lived when I was a teenager).  Every time I even think "if only..."...
If you were not an ocean racer, what would you be? I would have liked to be an oceanographer, but that would have meant different A Levels, degree etc

Your ambitions in the 2020 VG: "To get round successfully an ideally break the record for the boat which was 90 days but Dominique Wavre pushed the boat hard and our course is longer.
Weaknesses (what could stop you achieving that goal apart from damage to your boat): Like I say I am not great on electrics.
What would you consider to be a successful VG for you? To get round and finish.
What do you want to share most of all? I want to share the story and I will send all that is required of me but to be honest I like writing most of all. And I will film when I think there is good stuff to share with people but I don’t agree with just filming for the sake of it.
Describe the VG for you in three words….bl++dy long way
Three stand out images you have of the VG: Watching Bilou finish in 2000, Yves Parlier's incredible exploit with his rig, the French navy images of Hugo Boss and Banque Pop in the last VG
Which skipper inspires you? There are plenty past and present. I really admire anyone who has set off on this race, especially those who went round when the comms were not what they are now. It is a very different game now, it is like Halvard describes it as living in phone booth which is permanently connected to the outside world, you have a permanent umbilical cord, so anyone who went round in the early days I really admire.
What would you not go around the world without? : Tea"