Home News Alan Roura, 'I want my baby daughter to grow up being proud of me and what I have done.'

Alan Roura, 'I want my baby daughter to grow up being proud of me and what I have done.'

The youngest competitor in this ninth Vendée Globe is far from the least experienced. Last time, when he finished 12th, it was a voyage of discovery for the Swiss sailor who was 23 when he finished as the youngest sailor ever to finish the race. Back then, racing the legendary Superbigou which was built by his compatriot Bernard Stamm, his was a super low budget effort, at one point struggling to have enough money to put fuel in the tank of their team van. Now with decent funding and the much updated 2007 Finot Conq design which was built as BritAir, Roura is raring to go with a competitive programme. But the ambience around his programme remains just as was before, super committed and focused but mainly working with friends, so the innocence and the passion of the first time remains intact.

How does it compare to last time Alan, same place four years on?

Last time the boat was completely empty without sails, all the electronics were out and dead. Everything is different, we are ready, we have a real team and I feel really chilled about the race. That is very cool.  Now I have learned to be so much more serious about performance and preparation. It is is a totally different project this time. I have more money and so we have more people working. I think I am still a cool manager though, we have the same atmosphere as before. The team spirit has not changed. That is the way I am and if people want to work with me then that is cool. I am happy with it, they are happy with it.

What have you taken from the last race to this time?

Right now have learned that there are still things to do. And I learned from last time to spend as much time here with the boat because this whole thing is something you will maybe live once or twice in your life.  These are all very special moments and I want to see the people and I want to exchange, to connect with the people who are coming here to see the skippers. They think it is incredible what we are doing and it is and I want to share it. Yes, I am worried about the COVID, but I am speaking from 10 metres away and the last two weeks I will be in quarantine. It is OK. 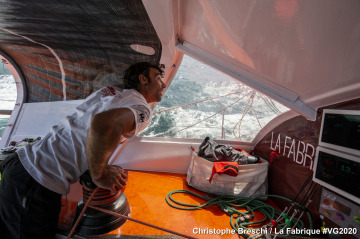 What about leaving your baby daughter Billy how do you think you will feel leaving her behind, and did you speak to any other skippers who have experienced the same thing?

I don’t really know how it will be, I really don’t. I spoke a little bit to Thomas Coville about it. But in the end he is three months old, and, yes he will be something like six months old when I am back, but it is not like he is at an age when he will forget who I am.

Do you think it will affect the way you sail?

I don’t think so, but I don’t know. But most of all I want my baby daughter to grow up being proud of me and what I have done. So I will push hard, I will push. I want to do as well as I can. And obviously the quicker I go the quicker I will be back to see her.

You are slightly unique in this fleet in that you have spent so much of your life since you were very little on the water sailing, there are of course a few skippers who sailed across oceans as a tiny infant but you have carried on sailing constantly from then. And your time off from your project is spent on your little, tiny family cruiser, and now you have just bought a bigger cruiser. You are really a child of the ocean at heart.
Yes, I am an adventurer and traveller at heart and I hope in a few years to go travelling with my family on a sailing boat. I bought a Nicholson 43 ten days ago. In the future I want to take people across the Atlantic with me as a business. I will work with the boat for five years and then we take off with the family. I want to keep doing this but to have a business, a property for the future as if this ended tomorrow I would have nothing.

What’s your group, your race within the race?

I really don’t know because the Vendée Globe is so, so long. There are people who are quick racing in the bay. I really want to be with the quickest daggerboard boats, V&B, Banque Populaire, Jean Le Cam, Damien Seguin. And I think we can beat some foilers too depending. I want to be up with the Giancarlo (Pedote), Fabrice Amedeo, Cali (Arnaud Boissières). I want to be in that match. I crossed the Atlantic five times on the boat already, the boat is ready. We know the boat perfectly. When you do a project for four years you want to do as many races and train as much as possible.

What is your relationship, a tool for the job or a dear friend?

It is not a tool, I have a great relationship with it but it is not like Superbigou. I have not worked every day as my own technician like I did on that boat so it is a different project. And the boat is already for sale and so I will race a boat which is for sale around the world and I guess that is a different relationship. I have close connection, it is a friend who I talk to all the time. And nearly always nicely!

What do you take with you as spare equipment?

We will take stock again this week. It’s a bit of everything, but overall a lot of Sika and grey tape simple things! After that, there is more to it, we need hydraulic materials because we have hydraulic keel systems, the same for foils.  A bit of composite, but not a lot. In the first Vendée Globe, we took a lot of stuff but in reality, there are parts that you cannot repair on your own. Two three parts for the winches. We have two autopilots on the boat who have been there from the start. After that, it will be enough to repair the sails, sewing thread, material. The fabric cockpit protective cap is also for repairing the sails, I can cut in it, even if suddenly I would no longer have any protection! We take the minimum for the simple reason that our boat is a heavy boat. So, we want to have the lightest load. We're weighing everything, piece by piece. We try to be as light as possible.

Food question, how many days do you leave with? What weight does this represent?

It's going to be a lot lighter than last time. From memory, four years ago, we had 350 kilos. I left with 127 days food at the time. I have arrived at 105 days. I hadn't worked with a nutritionist or anything. I just went to the supermarket, I had done my shopping, and I was like "well, I'm going to eat this". When the boat crossed the finish line we checked again and it was exactly what I had calculated. So this time I'm working the same way, except that I'm leaving with 80 days, knowing that it's 80 days with three meals a day. In the Atlantic, I don't eat three but rather two, so that gives me a little margin, let's say I have 90 days of food (freeze-dried). A few bottles of water, too, because the water from the watermaker every day is still not very good! This is the same, back then I had a 1.5L bottle a day and now I have a 1L bottle every two days. It's just enjoying a good bottle of water every now and then.