Home News Keeping the Vendée Globe as safe as possible

Keeping the Vendée Globe as safe as possible

During the first week at the race dock in the Vendée Globe start village the required safety equipment of all 33 IMOCAs was checked by the scrutineers. After earlier passing their medical examination and their first aid and medical training, the skippers and their IMOCAs are fully checked off and deemed ready to race.

The Race Direction team of four, led by Race Director Jacques Caraes, formerly a round the world ocean racer himself, keep the fleet under constant surveillance all the way through the race. Their tracker is updated every 30 minutes (and if they suspect a problem they can poll a faster update). So all the time Race Direction are monitoring the fleet, looking for unusually slow speeds or odd course angles. If they suspect anything they will often call the skipper to ensure all is OK. Likewise Race Direction have one direct dial phone number which is always manned for skippers to call 24/7.

Over the last months Race Direction compile a closed ‘Rescue Website’ on which there is all kinds of very detailed information and detailed images related to the skipper and his or her boat. As well as the different tracking beacons details, the rescue website is a one stop information source for any rescue authority to know all they might ever need to know about the boat and the skipper. That will include images of the boat at different angles as well as visual cues. There are images of the skipper and all of his or her detailed medical history and emergency contacts and family contacts.

Assistant Race Director Hubert Lemonnier reveals, “Our objective is to list, check and summarize all the information in a table in order to be sure that each beacon number is associated with the right boat and the right skipper. Once all of that is done, we log it all on the Rescue website. The aim is to provide rescue authorities with the right information around the clock. Each team must therefore provide us with their beacon numbers, safety information, a photo of the skipper in TPS (survival suit), a photo of the boat with sails, one without a sail, one of the boat lying down and one of the overturned boat.” explains M. Lemonnier, “Access to this site is limited to each MRCC. Indeed, access codes are validated from the passage of the first IMOCA into the given MRCC area until the departure of the last IMOCA. With the difference in the speed of the boats, several zones are activated at the same time. We hope we don't need to use it. In 2016, for example we did not need to use it very much but in 2008 it was a very useful asset." M. Lemonnier continues. 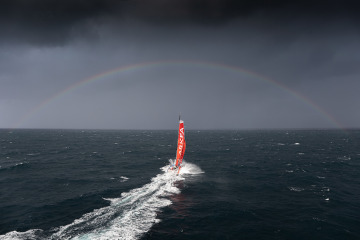 The big South an immense area to watch over….

For the huge surveillance zone from South Africa to New Zealand, a specific mechanism has been put in place with the recruitment of a security consultant, Sydney based Alan Nebauer, a former round the world racer. Says Lemonnier: "Alan Neuebauer's mission is to act as a conduit between the MRCCs in the southern hemisphere (South Africa, Australia, New Zealand) because he will be in the same Time Zone as the Vendée Globe competitors. He will be our eyes and our hands during time in the big south”.

In the event of damage, the skipper informs the DC and his technical team by telephone. In the more extreme cases where a boat triggers its beacon, the information arrives directly at the MRCC which, thanks to the Rescue site already has access to all the data. If a boat triggers its beacon, the problem is already serious and the skipper no longer has any means of communication. For the sake of verification, the MRCC calls the race director directly in the event of a beacon being triggered. Hubert Lemonnier: "We also notify the MRCC by email if a serious damage occurs to a boat, such as dismasting, in order to ensure their vigilance. However, they will not escalate anything until a beacon is activated."

The CROSS ETEL are the agency covering the start and the Bay of Biscay
CROSSs (Regional Operational Surveillance and Rescue Centers) are part of the MRCC network. There are 5 in France: Gris-Nez, Jobourg, CORSSEN, Etel, Cross Med La Garde. 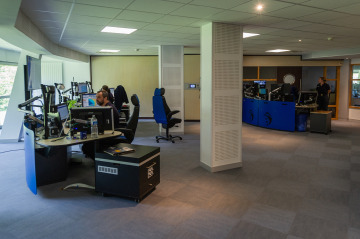 Explains Frédéric Garnaud, deputy director of CROSS Etel. In the very defined area of ​​the Bay of Biscay, the CROSS Etel is in charge of coordination so if there is a problem arising on November 8 at the start, we will be there. Internationally, the CROSS Griz-Nez is the French agency which is part of the global group of MRCCs. So if a beacon is triggered in the starting area, the Gris-Nez CROSS will also be warned. Vigilance is essential at the start of the race because the concentration of the ship is important.

Established in Etel since 1969, the CROSS is therefore in charge of monitoring the start of the Vendée Globe in addition to its maritime pollution control missions, fishing and information relating to maritime safety. 150 miles off the tip of Penmarc’h on the Spanish border, it covers 8 coastal departments and the entire Bay of Biscay. Behind a gigantic transmitter ram, the 1000 m2 building is a real hive of activity. 71 people of civil or military status are working closely behind 14 VHF stations on standby for any alarms. Almost 3,000 operations per year are processed following distress calls or requests for assistance. The men and women of the CROSS are one group of the many guardian angels who keep the Vendée Globe as safe as possible.