After a long, morale sapping summer searching for financial support the Swiss skipper Alan Roura has found a new, major title sponsor and has a truly exceptional boat, the ex-Hugo Boss. And so the skipper who been the youngest sailor on the last two successive Vendée Globe races is looking forwards to the Festive season armed with a new boat and a good programme on the horizon after having done a few weeks of training since the handover from Alex Thomson Racing.

Roura notes, "The water is a bit cold, but the wind conditions are ideal." A few days before the Christmas, Alan Roura has spent days where he feels happiest on the water. The Swiss team  are building up their sea trialling and training time aboard the ex-Hugo Boss.

"We try to sail as much as possible until January, February". Enthuses the 28-year-old skipper, full of positivity for the future, having a clear vision of the short and medium-term future and the simple enjoyment of now having 'an exceptional boat.

"Compared to the 2007 generation boats, it's like night and day," he says. “You don't have to push the boat or yourself to go fast and take off. And the foils start to lift even in light winds ”.

Of the VPLP design Roura likes……"The comfort and performance, the ability to quickly feel very good on board and how everything is very well thought out and you are usually neither tired nor wet That said it's still a boat, you have to adapt to the colors of the ropes, the layout of the halyard runs and the sheets. But we have done all that quickly!”

But this period represents the best possible outcome after a really tough few months of prospecting.
After five years of collaboration with La Fabrique - with whom he maintains very good relations – Roura had to relaunch a big search for funding.

"We were aware that it was going to be complicated with the current period, the impact of Covid-19,” says Roura of the partnership he has with his wife, Aurélia, who has worked in his corner since he was in the Mini Class. "These are difficult times but working as a family helped to keep up the motivation." 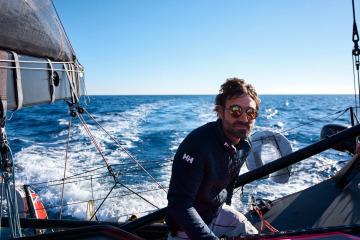 Roura admits his morale was at a real low point before the new partner emerged at just the right time.

“At some point, you tell yourself you're not going to make it.  It was ‘that’ week, the one when you want to let go of everything, that's where it started to move forward. "

A title partner engaged with them and the rewards came for their efforts. They knew all the time it was "too late to build a boat". Among the boats available, Hugo Boss had twofold appeal, “We weren't just buying a boat, but we also buy Alex Thomson’s experience, his expertise and all of the boat’s development work.”

And so when all of his IMOCA counterparts were preparing for the Transat Jacques Vabre, Roura headed to Cannes in October to pick up the boat and brought it back to Lorient. Over the course of these busy weeks he has nothing but praise for Alex Thomson who he sailed with during the handover period. "He is a deeply kind and passionate guy who happily passes on his knowledge. Sailing with him was pure happiness ".