Titouan Lamazou gets the ball rolling

The formula was simple. They had to sail around the world alone via the three capes. Without stopovers. Without assistance.

And they had to make it back. It seemed a crazy idea, but it would work well for the pioneers, who set sail from Les Sables d’Olonne on 26th November 1989. The Vendée Globe was born. Titouan Lamazou was an artist. And a great sailor.

Titouan Lamazou gets the ball rolling

The formula was simple. They had to sail around the world alone via the three capes. Without stopovers. Without assistance. And they had to make it back. It seemed a crazy idea, but it would work well for the pioneers, who set sail from Les Sables d’Olonne on 26th November 1989. The Vendée Globe was born. Titouan Lamazou was an artist. And a great sailor.

People say sailors are superstitious. They never talk about the furry animal with big ears and pray that the champagne bottle breaks on the first attempt at the christening ceremony. They did not appear to be like that on 26th November 1989, as there were thirteen lining up for this first Vendée Globe. In the newspapers, they talked about the race of the Century and they tended to be sensationalist asking the all important question: “How many would return?”

Sailing legends from that era like John Martin, Yves Le Cornec and Robin Knox-Johnston gave up… which gives an idea about the amount of preparation and the budget it takes just to get to the starting line. There were thirteen taking part in this first Vendée Globe: ten Frenchmen, two Americans and a South African. They were Guy Bernardin, Patrice Carpentier, Jean-François Coste, Pierre Follenfant, Alain Gautier, the organiser, Philippe Jeantot, Titouan Lamazou, Loïck Peyron, Mike Plant, Philippe Poupon, Bertie Reed, Jean-Yves Terlain and Jean-Luc Van Den Heede. The papers, who predicted blood and tears, chose their favourites, Jeantot, Poupon and Terlain. We should remember that at that point, neither Loïck Peyron nor Alain Gautier were yet thirty years old. The five aforementioned had a long list of successes. So not much was said about Titouan Lamazou, who had nevertheless finished second in the previous Boc Challenge and who had been a crewman with Yvon Fauconnier on Vendredi 13 and Eric Tabarly on Pen Duick VI. This experience with the master was something he shared with two other competitors, Philippe Poupon and Jean-François Coste. At 1515hrs on 26th November 1989, Eric Tabarly fired the starting gun, once the trawlers from Les Sables had towed the boats to the start line.
The first example of damage set the tone for the Vendée Globe, a race and an adventure: the gooseneck fitting on Crédit Agricole, Jeantot’s boat, broke and he had to make another one with the means on board to continue his race.

The general public found out what the Doldrums were like, bringing some, like Jeantot to a halt with sails flapping, leaving others to make their getaway in a squall or thanks to a cloud… Aboard his Ecureuil d'Aquitaine II, a brand new Bouvet-Petit design, Titouan Lamazou was already the frontrunner. He led the way from the third day of the race, closely followed by Philippe Poupon. In the Roaring Forties an incident happened, which would become the first big moment in the Vendée Globe, one of the pillars of this legend. On 28th December, Philippe Poupon triggered his distress beacons. Three boats headed towards him, after a reconnaissance aircraft confirmed that the skipper of Fleury Michon was still on board. Loïck Peyron was the first to reach the area and filmed the whole crazy rescue. After “Philou” had removed his mizzen mast and Peyron had carried out a manoeuvre to tow the boat in the right direction, the operation was successful. Those pictures would be seen around the world. Sailors could rescue each other, when things went wrong. Poupon was of course forced to retire, as was another favourite, Jean-Yves Terlain, whose UAP was dismasted. He headed for South Africa feeling devastated.

The American Mike Plant had to ask for help off New Zealand. Guy Bernardin was brought down by a horrible toothache, while Bertie Reed retired after rudder damage. Patrice Carpentier suffered from a lot of problems with his steering, boom and autopilot…

“A very good story with a happy ending”

We could only imagine what it was like from ashore, but the Southern Ocean seemed terrifying. Philippe Jeantot would later say, “All we knew was theoretical. We were told that the further down we went, the shorter the voyage and the stronger the winds. We had to go down there to find out. So for a week or ten days we sped along in amongst the icebergs, with the permanent risk of hitting one. It was too close to Russian roulette. We talked about it with each other on the BLU. We said we’d never do it again. As I was organising the race, I told myself that we would have to put that into the rules.” This led to the famous Ice Gates that exist today.

There were however, no serious accidents in this first Everest of the seas. On 9th February, Titouan Lamazou rounded Cape Horn as the leader, but his two closest rivals, Jean-Luc Van Den Heede and Loïck Peyron, were only twenty hours or so behind. The climb back up the Atlantic was a real race, although Patrice Carpentier had to stop in the Falklands. In the rankings it was close, as Loïck Peyron benefited from a bonus of 14 hours and 30 minutes for going to the rescue of Philippe Poupon. But Titouan Lamazou held on. The artist/sailor gave nothing up as he crossed the Equator for the second time, nor in the North Atlantic and on 16th March, five minutes after midnight, he crossed the finishing line as the winner in Les Sables d’Olonne. During the night escorted by dozens of spectator boats, the sailor from Béarn entered the history books. Titouan Lamazou became the first winner of the Vendée Globe after 109 days, 08 hours and 49 minutes. Loïck Peyron (110 days and 1 hour) and “VDH” (112 days and 1 hour) made up the star-studded podium. Seven boats were ranked out of the thirteen that had set sail. They all made it home. The legend was born. Jean-François Coste, seventh after 163 days on Cacharel (which was none other than Tabarly’s ex-Pen Duick III), wrote, “The sea didn’t hold us back, but gave everyone what they wanted. So everything is fine. A very good story with a happy end.” 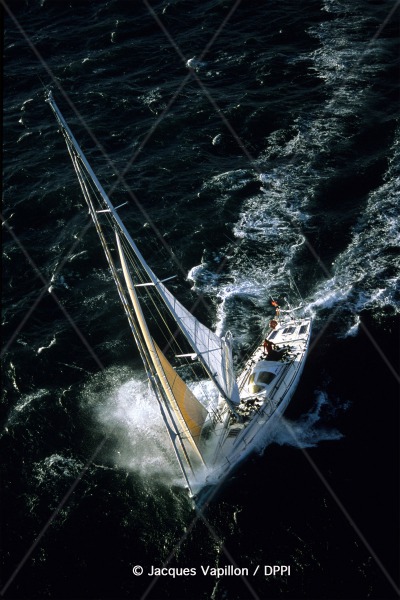 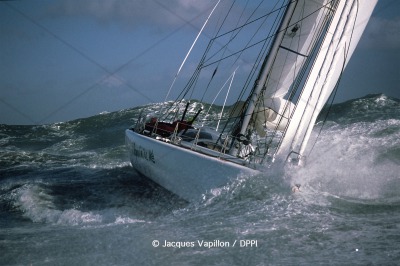 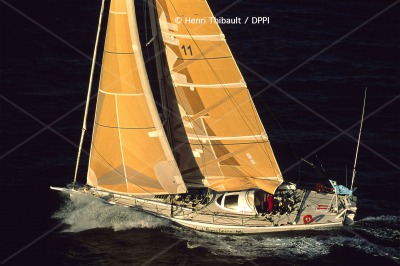 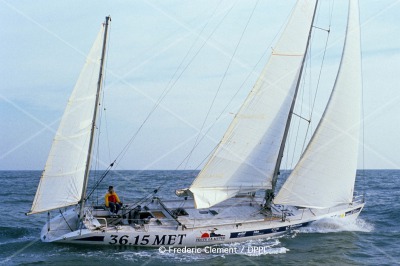 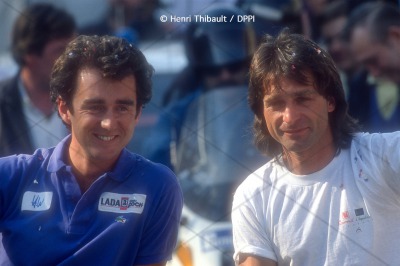 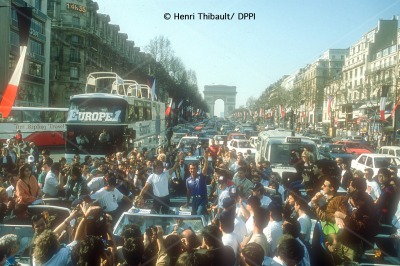 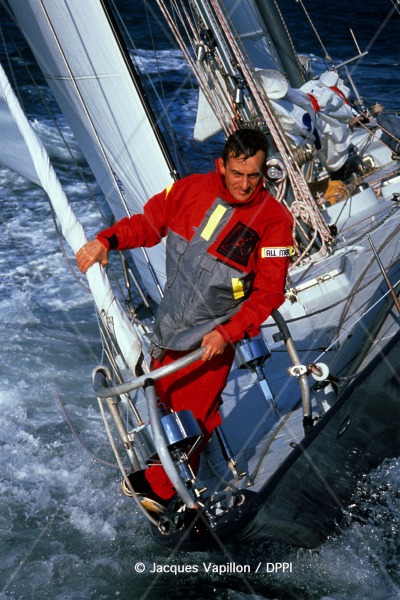 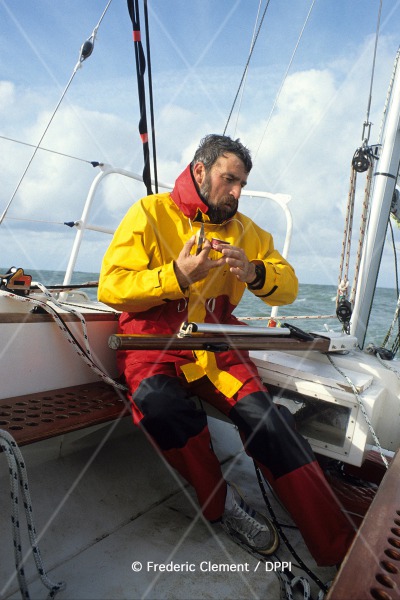 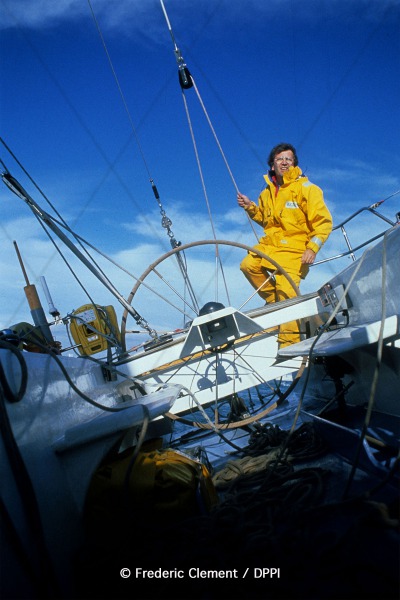 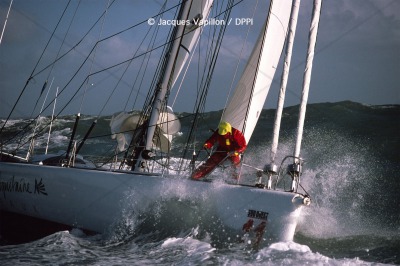 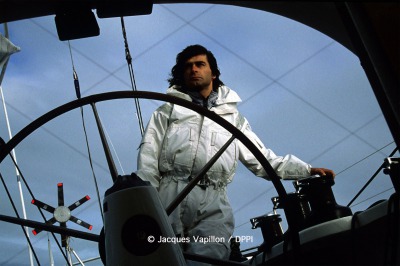