After Titouan Lamazou’s win in 1990 and Alain Gautier’s in 1993, the third edition of the Vendée Globe, now taking place every four years, saw the level of enthusiasm rise.

The start and finish attracted hundreds of thousands of fans. All the racers from the Solitaire du Figaro dream of this non-stop solo round the world race and the designers came up with even more extreme monohulls…

After Titouan Lamazou’s win in 1990 and Alain Gautier’s in 1993, the third edition of the Vendée Globe, now taking place every four years, saw the level of enthusiasm rise. The start and finish attracted hundreds of thousands of fans. All the racers from the Solitaire du Figaro dream of this non-stop solo round the world race and the designers came up with even more extreme monohulls…

There were fifteen of them taking part plus one more unofficial candidate: Raphaël Dinelli did not get the authorisation to take part, as he hadn’t carried out his qualification on time. But the sailor from Aquitaine was determined. Before getting his hands on Philippe Jeantot’s boat in the winter, he had prepared the monohull for the winner, Titouan Lamazou in 1989, then the same boat again for Bertrand de Broc three years later. He took part 3 times in the Solitaire du Figaro, the perfect training for Vendée Globe racers. No fewer than half of the skippers in this third edition came from that emblematic race and the attraction of training there would increase over the years. In 2016, there will be fifteen former Figaro racers taking part, including five winners…

The Vendée Globe had become the ultimate challenge for a sailor, the Holy Grail of sailing, an incredible challenge, where you had to spend three months at sea without assistance on the world’s three biggest oceans. After the pioneers in the first edition, and in spite of the dramas that unfolded in the second (loss of Mike Plant during his delivery trip to Les Sables d’Olonne, Nigel Burgess drowning in the Bay of Biscay), the candidates wishing to take part, entered enthusiastically, although some had to throw in the towel before setting off, such as Eric Cadro a few weeks before the gun was fired on Sunday 3rd November 1996.

After Alain Gautier’s win in 1992, the Finot-Conq design team came up with a wide beam, a boat that was low in the water with a lot of ballast, but was as light as possible. These monohulls do not like sailing upwind, but are outstanding when the wind is more favourable. Canting keels were the fashion for Christophe Auguin and Isabelle Autissier, and wing masts with deck spreaders were a major innovation for Yves Parlier. Out of the 15 setting off, six boats were designed by the design team based in Jouy-en-Josas. The round the world reference time set in the first edition by Titouan Lamazou (109 d 08h 48’) was within reach.

In the middle of this French armada represented by eleven solo sailors including two women, there were two Englishmen, Pete Goss and Tony Bullimore, a Canadian (Gerry Roufs), a Hungarian (Nandor Fa), a Belgian sailor (Patrick de Radiguès): the Vendée Globe had conquered the world The race was now open to 60-foot IMOCA boats (an association created in 1991 by Autissier, Auguin and VDH), but also to 50-foot boats represented in 1996 by Pete Goss and Patrick de Radiguès. But from the very first days, the race was marred by bad weather. The Bay of Biscay was angry with 35-40 knot winds gusting to more than 50 knots.

The round the world race was merciless: any lack of training was punished in the first few miles. That was the case for the Basque, Didier Munduteguy, whose boat was dismasted on the day after the start. Then, the British sailor, Tony Bullimore had to turn back as did the Hungarian, Nandor Fa, who returned to Les Sables d’Olonne with a keel that had started to work loose, and Thierry Dubois, who hit a UFO and needed to repair a leak before setting sail again three days behind the leaders led by Yves Parlier and Isabelle Autissier. The pack was slowed off the Canaries, then the Doldrums split them wide open: Yves Parlier, Isabelle Autissier and Christophe Auguin made their getaway, while those chasing after them, suffered in calms and torrential rain.

The three leaders were pleased to widen the gap and encouraged each other on their Finot-Conq designs as the battle raged: the three took advantage of a particularly favourable St Helena high to slide down to the Roaring Forties at full speed and more than 400 miles ahead of the Canadian, Gerry Roufs in fourth place. They had hardly sailed a fifth of the course and already the gap was huge. The Hungarian had to retire after twice returning to Les Sables d’Olonne, after colliding with a cargo vessel and with his electrical system broken down.

As they entered the Southern Ocean, the female sailor from La Rochelle noticed she had lost a rudder. She was forced to carry out a stopover in Cape Town, so the race was over for one of the favourites… Rudder damage was to spread like a virus as they approached the Southern Ocean: after Isabelle Autissier, who set off again outside of the race, Thierry Dubois was forced to head for the South African port and on the same day, Yves Parlier saw he had the same damage and headed for Perth (Australia)… The ice seemed to be a long way up in the winter of 96 as Gerry Roufs discovered his first iceberg at 47° S and his first Indian Ocean storms: Christophe Auguin was alone out in front, but was caught by the areas of low pressure sweeping violently across the Southern Ocean.

Storm in the Southern Ocean

Gale force winds propelled the leader at full pelt across the halfway line, but got the adrenaline pumping as the stress built. These conditions however affected in particular those further back, sailing off the Kerguelen Islands: almost all of the competitors saw their boat knocked down by breakers. Being swept along by these huge waves, the boats were suffering more than the skippers: Raphaël Dinelli was the first to pay the price. After capsizing, his mast broke and pierced the hull, creating an ingress of water which the competitor was unable to stem. He triggered his distress beacon… The British sailor, Pete Goss was the nearest competitor, but there was more than 70 knots of wind and waves in excess of ten metres. The Englishman took two days to sail the 150 miles separating him from the skipper from Arcachon, who was miraculously rescued as his boat, Philippe Jeantot’s former Crédit Agricole was sinking.

Then, Thierry Dubois was blackballed by the mountainous seas in the Indian Ocean: capsize, dismasting and an upturned boat. On the following day at the start of 1997, Tony Bullimore lost his keel and his boat remained upside down… Two other distress beacons were triggered. The two closest boats were near each other more than 2500 km from Australia. Three days later, the Australian Navy were there to pick up Thierry Dubois from his life raft, and Tony Bullimore, who was inside his upturned hull. Everyone was saved… Except Gerry Roufs was no longer answering…

In the wake of the leader Christophe Auguin, who was way out in front approaching Cape Horn, the Canadian was still in the Pacific close to Isabelle Autissier, who had set off again from cape Town, but was no longer officially in the race. Lows can be just as nasty in this part of the Southern Ocean with winds in excess of 70 knots and waves bigger than 8m. There were no longer any messages coming from Gerry Roufs and during this first week of the year, his Argos beacon stopped sending and it was no longer possible to establish contact with the skipper. The organiser, Philippe Jeantot asked Isabelle Autissier, Marc Thiercelin, Bertrand de Broc and Hervé Laurent to head for the last known position of the Canadian, in the world’s most remote zone… All the efforts were in vain. It was like finding a needle in a haystack with mountainous seas and with no true position for the missing sailor. He was not to be found. His boat was found in bits on a beach in Chile months later. Gerry Roufs was nowhere to be seen.

Alone in the world

While the pack suffered a pounding in the Pacific, with the icebergs a long way up that summer, Christophe Auguin rounded the Horn on 9th January 1997: the climb back up the Atlantic was quieter than the storms that raged in the Deep South and when the future winner of this third edition of the Vendée Globe was entering the bay of Biscay, at the rear, Pete Goss, had just rounded Cape Horn. The skipper from Granville took just 105 days 20 hours and 31 minutes to reach the finish, but after him, there was a huge gap, the widest in the history of the non-stop solo round the world race!

Marc Thiercelin and Hervé Laurent battled it out together from the Pacific, but in second place behind Christophe Auguin, Marc finished more than a week and a half later in Les Sables d’Olonne. Out of the fifteen official entrants and the unofficial racer, Dinelli, only six were ranked, including the first woman to complete the non-stop round the world voyage, Catherine Chabaud. Two solo racers finished without being ranked (Isabelle Autissier and Yves Parlier), seven sailors had to retire and one man was lost at sea, Gerry Roufs. The competitors and organisers would learn important lessons from this dramatic edition to apply stricter rules to the high-performance monohulls… 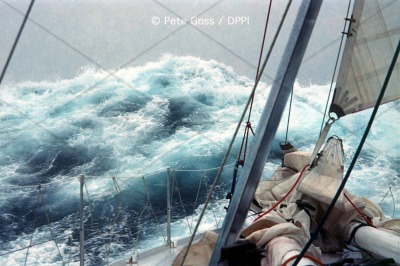 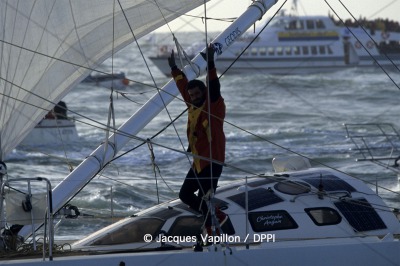 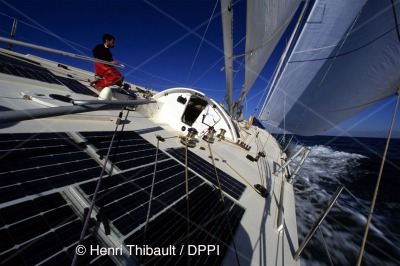 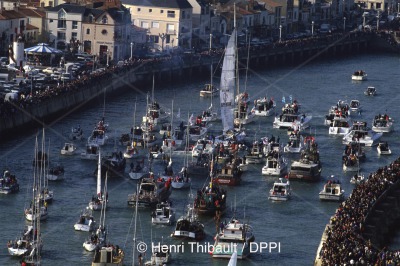 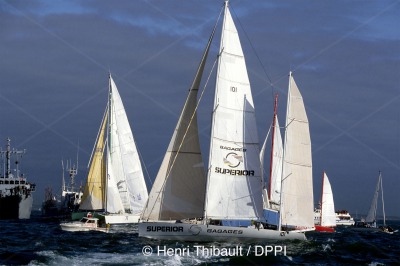 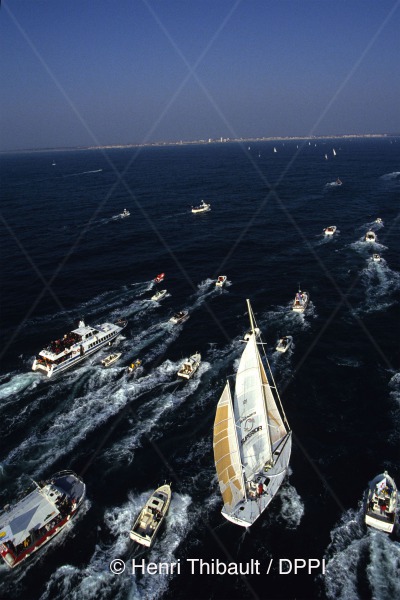 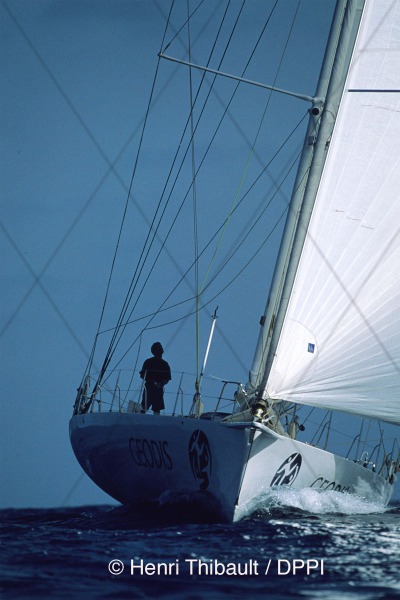 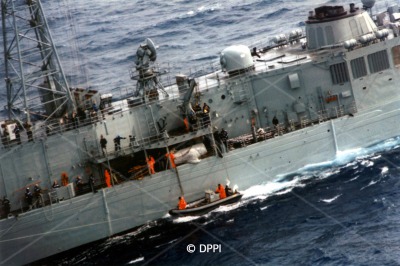 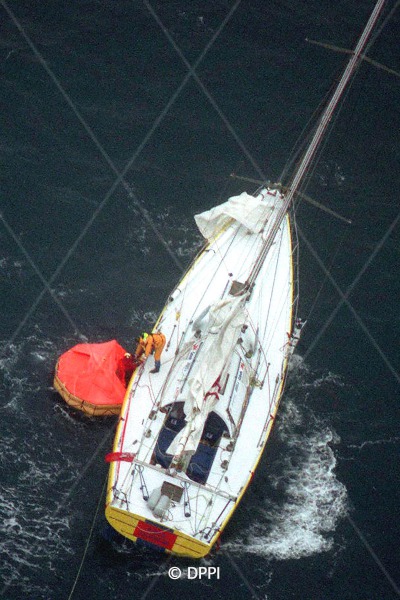 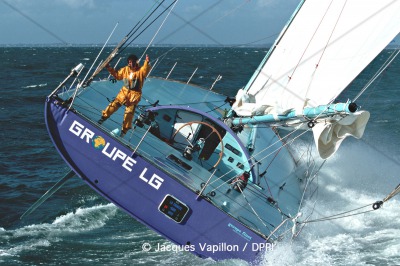 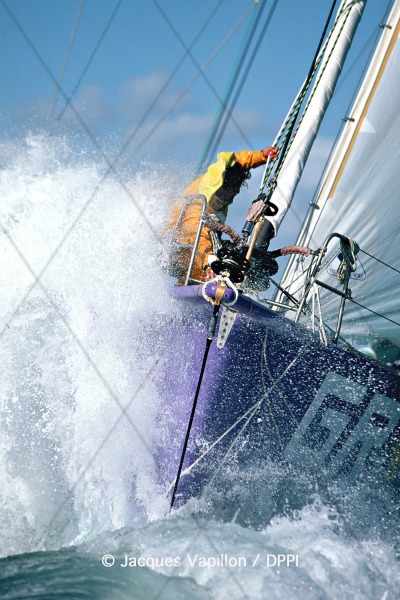 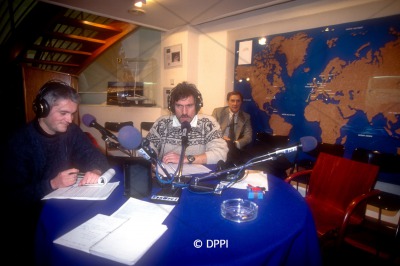