The fourth Vendée Globe was a turning point.

The shock of 1996 was still on everyone’s mind and safety was improved. There was much more coverage thanks to pictures being sent back. But more importantly, the event became a truly global race. In this contest, while we saw the arrival on the scene of Ellen MacArthur, it was Michel Desjoyeaux, who proved to be the strongest.

The fourth Vendée Globe was a turning point. The shock of 1996 was still on everyone’s mind and safety was improved. There was much more coverage thanks to pictures being sent back. But more importantly, the event became a truly global race. In this contest, while we saw the arrival on the scene of Ellen MacArthur, it was Michel Desjoyeaux, who proved to be the strongest.

The drama of the Canadian, Gerry Roufs, lost at sea in the previous edition was still fresh on our minds. The racers grouped together in the IMOCA association called for stricter safety and construction rules, in particular with righting tests. Isabelle Autissier (who searched for Gerry Roufs in vain 4 years before) approved. She didn’t compete this time, but played a key role in the wings, as she advised Jean-Jacques Laurent, the CEO of PRB, to take on another talented Figaro racer, Michel Desjoyeaux. A very inspired piece of advice.

I’m not an adventurer

24 sailors lined up for the first Vendée Globe of the new century, including eleven non-French skippers from Belgium, Switzerland, Italy, Spain, Russia and Britain. Two women lined up at the start, Catherine Chabaud and the young British sailor, Ellen MacArthur, aged just 24. Among the favourites, apart from Desjoyeaux, there was also Yves Parlier, Roland Jourdain, Mike Golding, as well as Marc Thiercelin, Thomas Coville and Dominique Wavre. There was a small problem however. A furious storm hit the Bay of Biscay and the Race Directors were forced to postpone the start. Initially planned for Sunday 5th November, they eventually got underway four days later. In spite of that, they got off to a cracking start with Roland Jourdain and Michel Desjoyeaux setting the tone. The Vendée Globe was now truly a global event and the race was on at full pelt, s if they were racing on Figaro boats. Their rivals were worried at the pace being set, regretting the times when it was seen as wise to ease off to take care of your boat. The leaders fought it out, as they clearly knew how to do getting the most out of their boats. “I am not an adventurer, I’m a racer,” stated Desjoyeaux.

Behind them, the young English woman held on. Ellen MacArthur sent back video and audio of life on board, not hiding her joy, when she danced on the deck, or her fears, when she had to climb to the top of the mast. The general public loved it and she became the media’s favourite. There was plenty for the media, as this edition also marked the arrival of more sophisticated means of communication, allowing better boat-shore contact.

In the race, during the first fortnight at sea, several boats were forced to retire. Patrick de Radiguès was very lucky. He was knocked out when his boat was knocked down. She drifted and ran aground on a beach in Portugal. Bernard Stamm also had to throw in the towel after suffering damage. Unfortunately that was also the case for Eric Dumont and Richard Tolkien. On 1st December in the middle of the Atlantic, the leaders were off Uruguay. Yves Parlier managed to get ahead of Michel Desjoyeaux and Roland Jourdain. Ellen MacArthur was in forth place ready to pounce. They quickly rounded the Cape of Good Hope, but the Indian Ocean was cruel to Yves Parlier. Diving too far south, he found himself trapped in calms and lost his lead to Michel Desjoyeaux, followed by Roland Jourdain, 100 miles behind as they passed the Kerguelens. The Southern Ocean lived up to its reputation…

Ellen MacArthur and Josh Hall filmed huge icebergs close to them, while Dominique Wavre covered 432 miles averaging 18 knots. The big news was that the former leader, Yves Parlier lost his mast, but wanted to stay in the race. All by himself, he repaired his mast on Stewart Island. Thierry Dubois stopped in New Zealand to carry out repairs and set off again no longer officially in the race. On 1st January 2001 in the middle of the Pacific, Michel Desjoyeaux was in tears. His engine would not restart and without that, there was no power for the autopilot, no instruments, so no win in sight. But then, something incredible happened. Thanks to a pulley system attached to the boom of his boat and a sudden gybe to create a shock, he finally managed to get the engine going again and hope returned. “D for Desjoyeaux, DIY and diesel engine!” he declared in front of his onboard camera in a film that will not be forgotten. On 10th January, the Professor rounded the Horn 600 miles ahead of Ellen MacArthur. Five days earlier, Roland Jourdain admitted he had suffered damage to his mainsail track, forcing him to continue under reduced sail. The young British sailor took advantage of that to grab second place. Only Marc Thiercelin managed to hold on to the three frontrunners. Roland Jourdain stopped and managed a quick repair in the Chilean cove at Caleta Martial.

It was an epic climb back up the South Atlantic with the gap stretching out before narrowing over and over again. By then, the first four had made their getaway and two duels were underway. The leaders, Desjoyeaux and MacArthur were neck and neck as they crossed the Equator, while Jourdain and Thiercelin were battling it out for third place. Roland’s boat was faster upwind than Marc’s. In front, the battle turned to the advantage of Michel Desjoyeaux, more inspired in his weather strategy. On 8th February, with a low causing heavy seas on the journey home, the stay on Ellen MacArthur’s boat broke, bringing to an end her hopes of a miracle.

On 10th February 2001, a huge firework display and a memorable celebration welcomed the winner Michel Desjoyeaux and his PRB. The Professor could wipe away his tears. For the first time a solo sailor had managed to complete the voyage in less than 100 days: 93 days, 03 hours, 57 minutes. There were huge crowds and emotions ran high. That would also be the case on the following day to welcome Ellen MacArthur and then, two days later, when Roland Jourdain took third place on this amazing podium. Everyone waited with bated breath for Yves Parlier for another month. Completing his voyage, E.T. arrived after 126 days at sea. 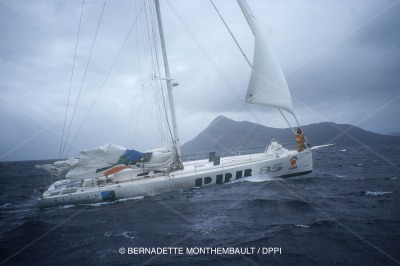 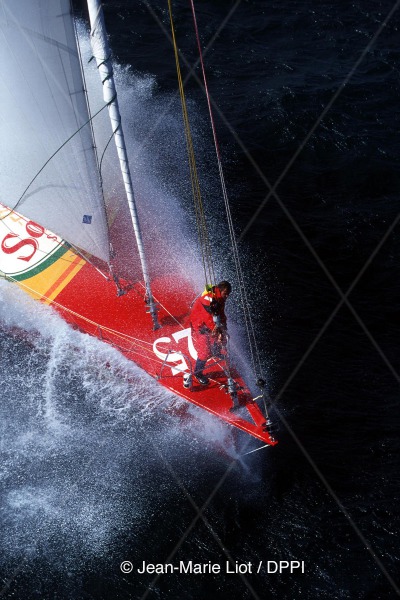 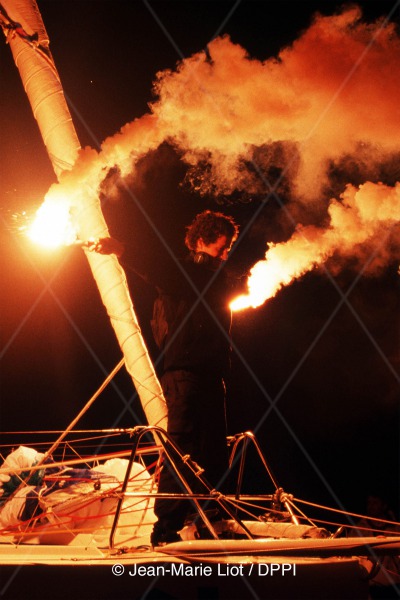 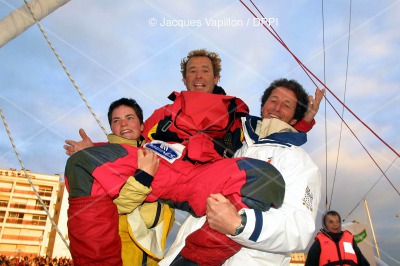 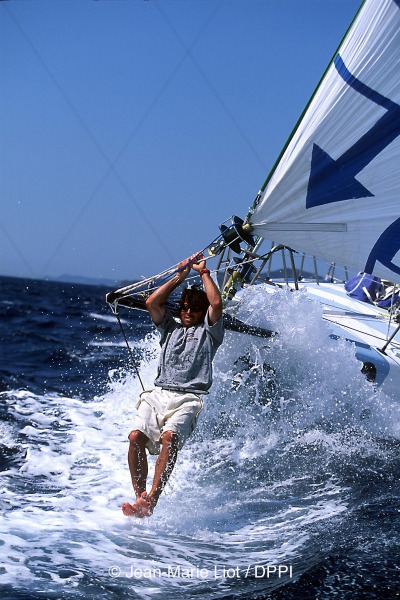 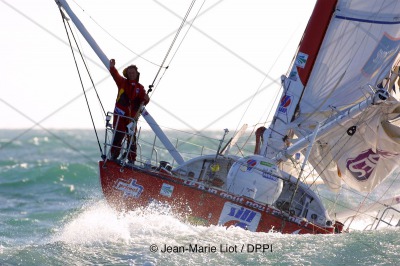 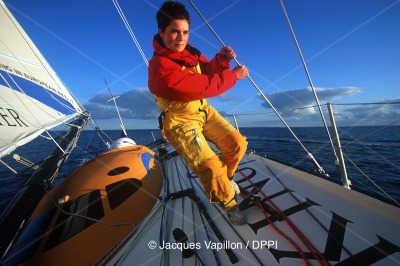 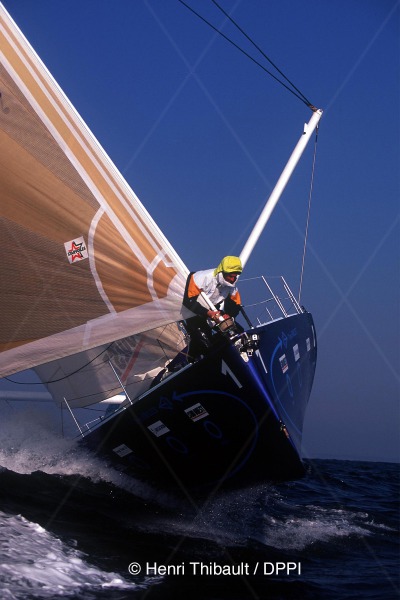 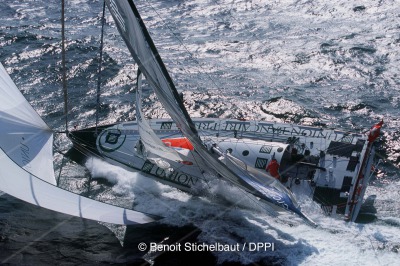 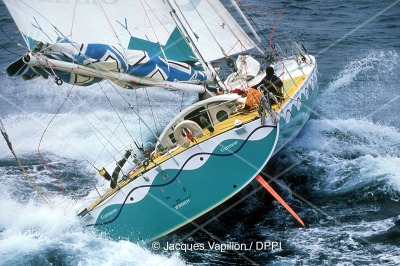 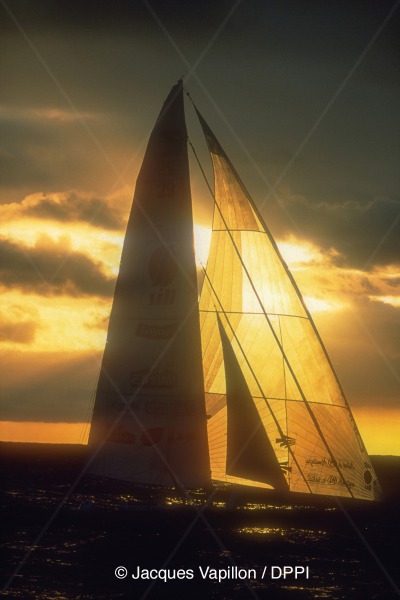 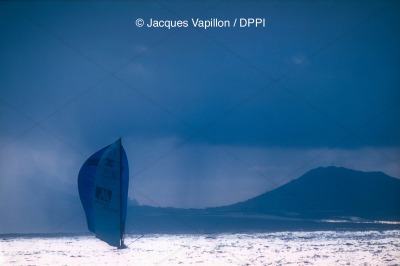