The fifth Vendée Globe saw an epic duel fought out between the Bretons, Jean Le Cam and Vincent Riou.

The battle raged throughout the race with the British sailor, Mike Golding also having his say. In the end, it was Vincent the Terrible, aboard PRB, who would come out on top.

The arrival of Riou, otherwise known as Vincent the terrible

The fifth Vendée Globe saw an epic duel fought out between the Bretons, Jean Le Cam and Vincent Riou. The battle raged throughout the race with the British sailor, Mike Golding also having his say. In the end, it was Vincent the Terrible, aboard PRB, who would come out on top.

Twenty skippers lined up at the start of the fifth Vendée Globe on 7th November 2004 off Les Sables d’Olonne. Among them, the elite of French ocean racing and seven from other countries, Britain, the United States, Australia, Switzerland and Austria. As is often the case, at least a third of the fleet were hoping to win, while others aimed for a decent place and some others saw it as an adventure aiming simply to make it all the way around the world. Two women took part, Anne Liardet and Karen Leibovici, and they would both be among the thirteen ranked at the finish. On the harbourside in La Chaume and Port Olona, the crowds lined up with more than 300,000 spectators.

For once, the weather was kind. Downwind sailing in the Bay of Biscay with just a small area of low pressure off Cape Finisterre to add a touch of spice to the start of a race that soon proved to be a sprint. Following on nicely, the Portuguese trade winds were well established and so the Vendée Globe got off to a quick start.

Sprinting from the start

As proof of that, the Canaries were behind thee first six boats after just four days at sea. They crossed the Equator in merely ten days. These frontrunners, where we could already see Vincent Riou, Jean Le Cam and Mike Golding, managed to get away from the traps of the Doldrums better than the other two thirds of the fleet.

The rounding of the St. Helena high in the South Atlantic also favoured two of the favourites in the race. At the Cape of Good Hope at the tip of South Africa, Vincent Riou and Jean Le Cam had already built up a good lead. Sailing practically within sight of each other after 6000 miles had been clocked up, Riou and Le Cam managed to get 300 miles ahead of a duo comprising Sébastien Josse and Roland Jourdain. The British sailor, Mike Golding was back in fifth place, a day and a half behind. Hervé Laurent retired after suffering rudder damage, while Patrice Carpentier also had to stop to repair his broken boom, before completing the race although not ranked.

Keel problems and other damage…

In the Roaring Forties, the battle raged throughout the rankings. The boat skippered by the British sailor, Alex Thomson paid the price. His boom attachment snapped off and with a hole in the deck, he had to change course and retire. There was disappointment too for the Austrian sailor, Norbert Sedlacek. His keel fitting gave up the ghost. In the Indian Ocean, the duel between Riou and Le Cam at the front continued at high sped, but further back, more damage was inflicted on those chasing them. The keel bolts on Sill et Veolia, Roland Jourdain’s boat, cracked and he risked losing the keel. Devastated, Jourdain headed for Tasmania… while Marc Thiercelin quit in New Zealand. A seventh skipper had to throw in the towel much later in the South Atlantic, Skandia, sailed by the Australian, Nick Moloney also suffered similar keel problems. He managed to get to Brazil.

But let’s go back to the Pacific, where the British sailor, Mike Golding caught the young Sébastien Josse… who had a huge scare when he hit a growler. The collision broke the bowsprit on VMI. Josse continued to sail, but the no longer had the ability to perform well and the speed dropped off. He really had to work hard to get fifth place at the finish in Les Sables d’Olonne, in spite of this handicap. But we’re not there yet. At the front, the duel was still just as tight between Vincent Riou and Jean Le Cam, who found the time to come up with nicknames for his two closest rivals, Goldfinger for Mike Golding and Vincent The Terrible for Riou.

Le Cam rounded the Horn in front. That often means final victory too in the Vendée Globe. But not this time. The climb back up the South Atlantic was cruel for King Jean, who got caught in the high, while Mike Golding clawed his way back… Vincent Riou had to keep his eye on these two, although he was now dominating the race. Further back, the gaps were widening. Karen Leibovici at the rear, hadn’t yet completed half of the Pacific, when the three frontrunners crossed the Equator for the second time.
The final stretch would be marked by two incidents. Firstly, Ecover, Mike Golding’s boat, lost her keel, but the British skipper would not quit and continued to sail as if she was a dinghy to get a well-deserved third place (Marc Guillemot would repeat the feat in 2012, after the same problem and getting the same result). Secondly, the general public imagined that Jean Le Cam would grab victory from Vincent Riou at the finish, as the later was forced to sail a long way north before coming back down to Les Sables d’Olonne. This was an optical illusion however. “I’m not worried. I’m sailing my route, even if I know this is not the shortest,” Vincent Riou calmly explained. He would win the race on 2nd February 2005 after 87 days 10 hours and 45 minutes at sea, a new record, averaging 12.73 knots. Jean Le Cam took second place less than seven hours later and so Mike Golding completed the podium the next day. We had to wait 4, 5 and 10 days more to see the next boats finish, Dominique Wavre, Sébastien Josse and Jean-Pierre Dick. Thirteen sailors were ranked and one sponsor was happier than the others. Jean-Jacques Laurent, CEO of PRB had won the race backing Michel Desjoyeaux, and had done it again this time with Vincent Riou. A good return on his investment! 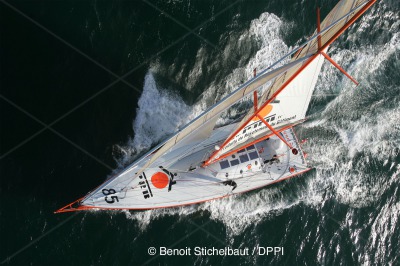 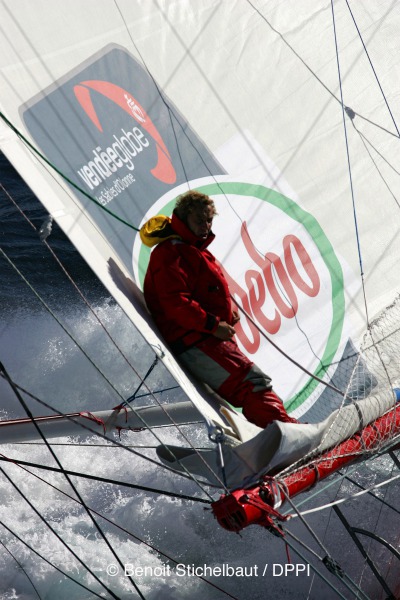 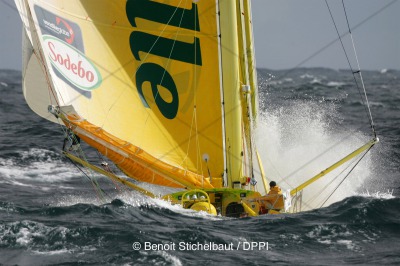 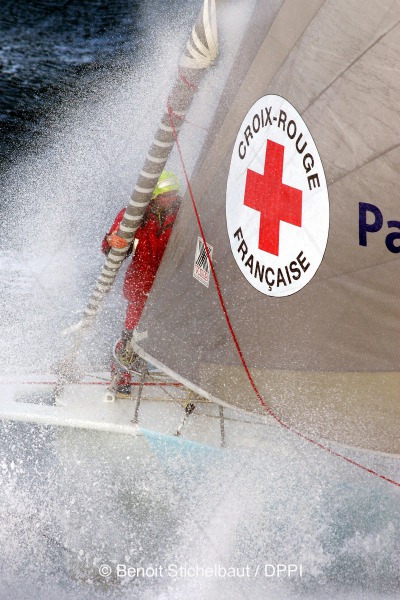 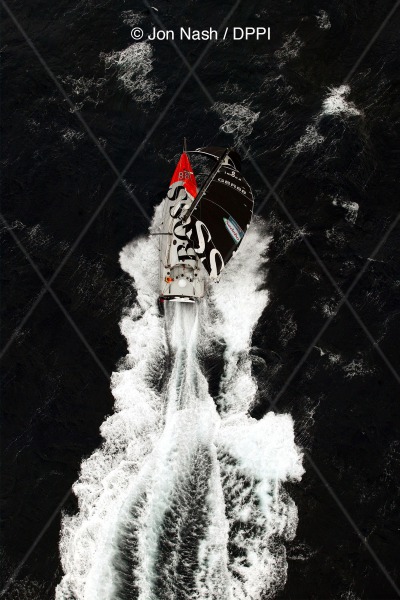 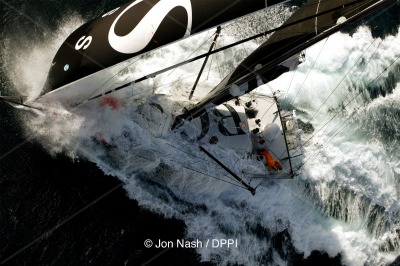 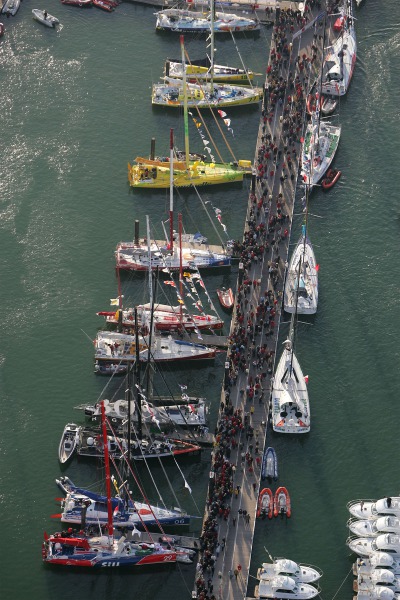 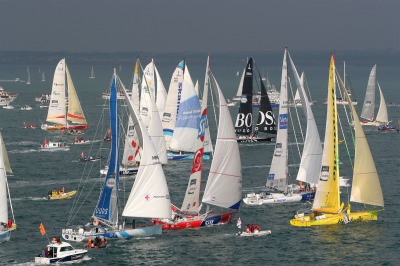 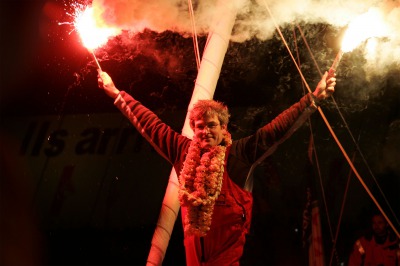 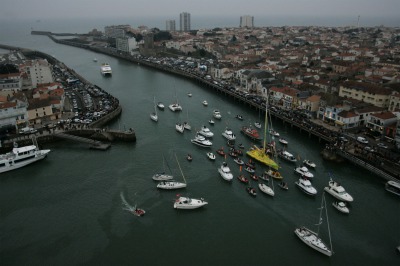 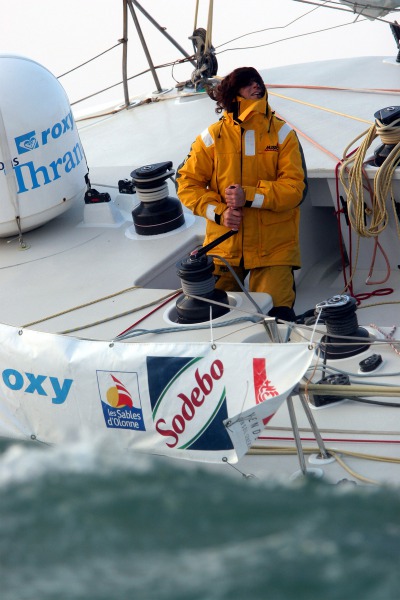