Another incredible achievement by Desjoyeaux

The sixth edition of the Vendée Globe will be remembered for the spectacular rescue of Yann Eliès in the Indian Ocean and Jean Le Cam at Cape Horn.

The big achievement in the race was that of Michel Desjoyeaux. After setting out more than 40 hours late, after returning to Les Sables d’Olonne to carry out repairs, he clawed his way back and won the race for the second time after 84 days at sea.

Another incredible achievement by Desjoyeaux

The sixth edition of the Vendée Globe will be remembered for the spectacular rescue of Yann Eliès in the Indian Ocean and Jean Le Cam at Cape Horn. The big achievement in the race was that of Michel Desjoyeaux. After setting out more than 40 hours late, after returning to Les Sables d’Olonne to carry out repairs, he clawed his way back and won the race for the second time after 84 days at sea.

In the papers, even before the start they were referring to the 2008 Vendée Globe as the Race of the Century. There were a record number of entrants with no fewer than thirty skippers lining up, including thirteen from outside of France. Among them, there were two previous winners, aiming to repeat their achievement, Vincent Riou and Michel Desjoyeaux. From the very first few hours of the race, the sailors were hit hard, as in the opening stretch in the Bay of Biscay, a storm was blowing.

The whole fleet suffered and early on, reports started to pour in about the damage boats were suffering. Kito de Pavant, the British sailor, Alex Thomson and Yannick Bestaven were forced to retire on the second day of the race. Marc Thiercelin’s boat was dismasted on the following day ruining his hopes of making his comeback. One after the other, skippers were eliminated, while five other sailors had to turn back to Les Sables d’Olonne to carry out repairs after the damage suffered in the first few hours. People thought that was the end of their hopes. That was the case in particular for Michel Desjoyeaux… who managed to carry out repairs, but set sail again 41 hours after the initial start, so he was almost two days behind.

At sea, everything was going well on the other hand for Loïck Peyron, who confirmed that he was one of the favourites, when he crossed the Equator as the leader. Behind him, struggling in the Doldrums, there was a group of five highly motivated sailors, Sébastien Josse, Jean-Pierre Dick, Armel Le Cléac’h, Vincent Riou and Yann Eliès. This leading group began to tackle the South Atlantic, where the rounding of the St. Helena high changed the pecking order. Sébastien Josse took the lead, but the gaps were small and they were sailing within sight of each other, when they reached the Roaring Forties. There was no respite for the boats and sailors with strong winds and boat-breaking seas. In the Southern Ocean, the conditions were violent. Loïck Peyron and Sébastien Josse extended their lead slightly and the latter retook the lead in the Indian Ocean. But further back, Michel Desjoyeaux had already begun his comeback. He was sailing faster than the others and was back to within a hundred miles of the frontrunner.

December was a terrible month. The solo sailors still in the race faced hellish conditions in the Indian Ocean. One sailor retired after another. Loïck Peyron and Mike Golding lost their masts. For Bernard Stamm, it was a catastrophe in the Kerguelens, where he intended to carry out a pit stop. His boat was swept onto the rocks. The boat skippered by another Swiss sailor, Dominique Wavre, was experiencing difficulties with his keel. Unfortunately worse was to come. On 18th December, the race became a drama. Yann Eliès, up with the frontrunners, broke his femur and pelvis when manoeuvring on the bow of his Generali, 800 miles south of Australia. Yann suffered horribly and had to make a superhuman effort to take refuge inside his boat and then look for painkillers. Marc Guillemot headed for him in horrible conditions to go to his aid, while they waited for the Australian Navy to take off the skipper of Generali, after suffering for two days. The sailor was rescued, and made it through after the operation and a long period of physiotherapy, but his boat was lost. The incident generated huge emotions ashore and obtained unprecedented media coverage.

In the race, the incredible was happening. Michel Desjoyeaux took the lead and kept it to the finish. In the Pacific that was far from being peaceful, he was out in front, while Sébastien Josse had to throw in the towel after his BT awas seriously damaged by a breaker. At that point, there were only sixteen sailors left in the race. Only Roland Jourdain and Jean Le Cam managed to keep up more or less with the new leader Michel Desjoyeaux and keep him in their sights. On 31st December, fate was to strike Jean-Pierre Dick. His boat collided with a growler – a piece that had broken off an iceberg – and he too was forced to retire. We thought that that may be the final blow. Unfortunately, that was not the case.

After 56 days at sea, Michel Desjoyeaux rounded the Horn as leader just a few hours ahead of Roland Jourdain. The battle was raging between the two men, when there was another major incident in the race. Jean Le Cam, then in third place, capsized 200 miles from Cape Horn. There was no news of the skipper. Armel Le Cléac’h and Vincent Riou headed towards him, with Riou the first to arrive in the area to find the upturned hull of VM Matériaux. After checking that Jean was indeed aboard the boat, which had lost her keel, the skipper of PRB managed to rescue the skipper of VM Matériaux. But during this dangerous manoeuvre, he damaged his own boat. In spite of attempted repairs, PRB was dismasted the next night. For the first time in the history of the race, Vincent Riou would be re-ranked third equal by the Jury.

Meanwhile, the leaders began their climb back up the South and North Atlantic, but the St. Helena high was blocking the way. Michel Desjoyeaux withstood the attack from Roland Jourdain… who hit a whale, but continued to race. On the 81st day of the race, there was another upset. Jourdain lost his keel bulb and had to retire. Michel Desjoyeaux was on his way to victory. He crossed the finishing line after 84 days, 3 hours, 9 minutes and 8 seconds. He sailed 28,303 miles at an average speed of 14 knots. Vincent Riou’s record was beaten by three days. Armel Le Cléac’h, regularly up with the frontrunners took a fantastic second place. Marc Guillemot took third place. The Austrian, Norbert Sedlacek was the final competitor home after 126 days. Out of the thirty skippers at the start, only eleven were to be ranked, including the two women in the fleet, the British sailors, Samantha Davies and Dee Caffari. 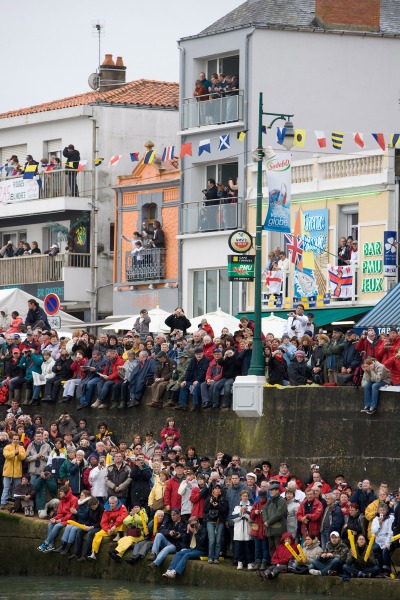 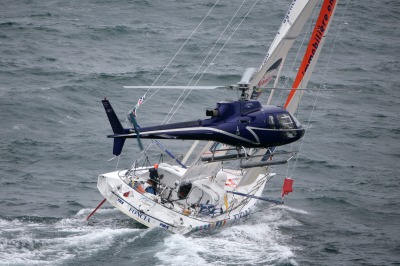 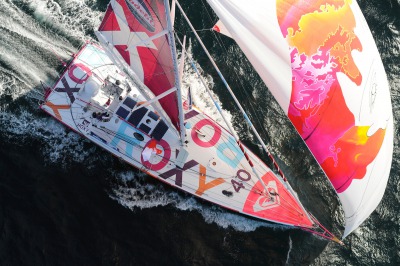 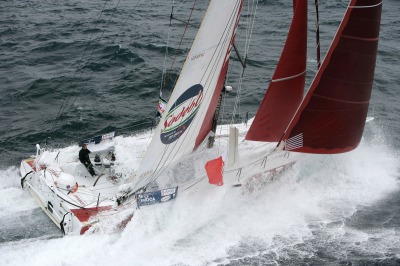 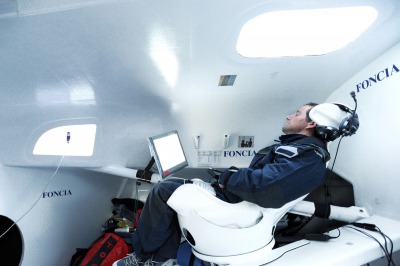 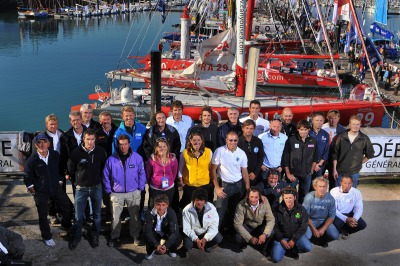 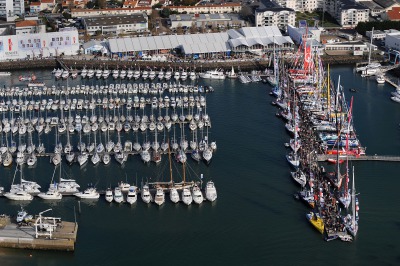 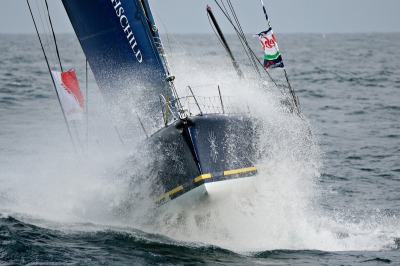 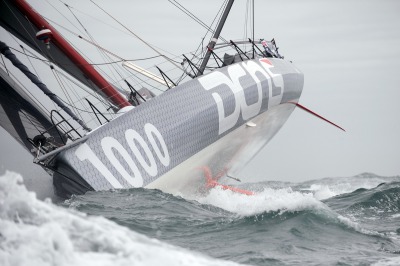 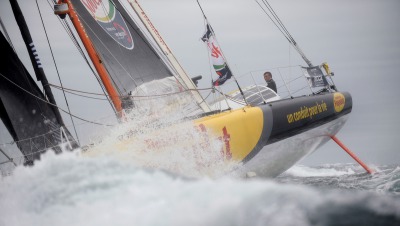 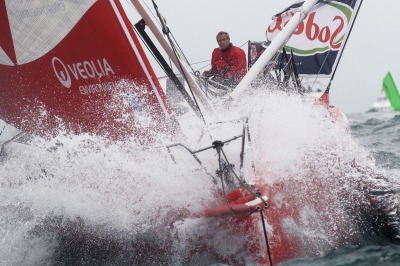 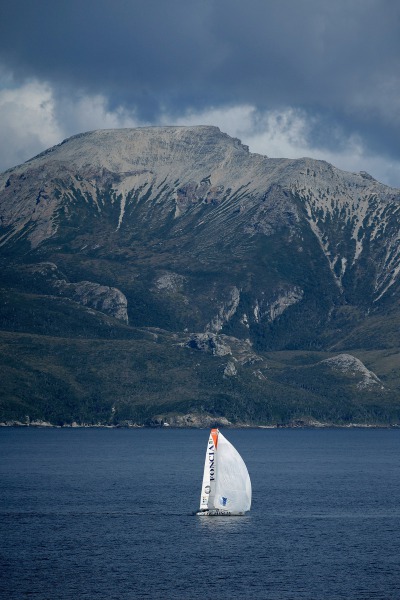 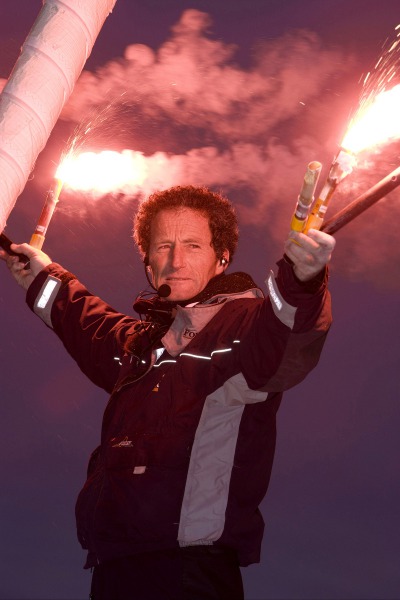 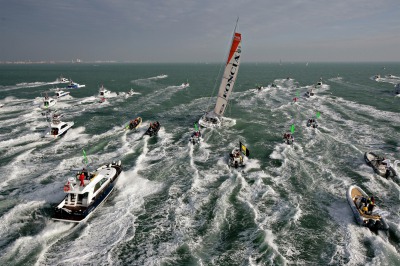 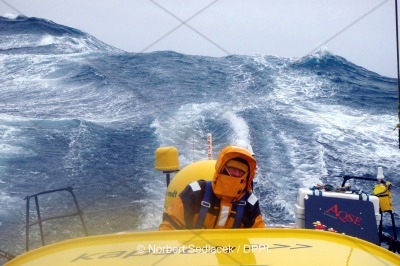