Home News The beginning of a Vendée Globe project: to Guadeloupe and beyond!

Among the 38 IMOCA sailors who will take the start of the Route du Rhum - Destination Guadeloupe, the second qualifying race for the Vendée Globe 2024, 15 will be competing in this transatlantic race for the first time. Four IMOCA sailors are even getting ready to start their very first solo race in the IMOCA class. On the pontoons of Saint-Malo, the Vendée Globe went to meet these sailors to find out a little more about their projects, which are quite remarkable...

Jingkun Xu, the first Chinese to dream of the Vendée Globe 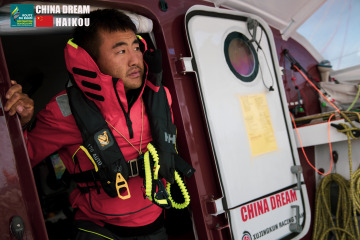 Jingkun Xu, known as "Jackie" in France, discovered the Vendée Globe in the media while competing in the Paralympic Games in 2008 (editor's note: the skipper is a hand amputee). It was a revelation. Since then, he started to sail single-handed offshore. First in China, then in France by taking the start of the Mini Transat in 2015. Then, he embarked on a solo round-the-world race, with stopovers, out of the race. Last May, he bought his IMOCA, the former boat La Fabrique, on which Alan Roura competed in the last Vendée Globe. Pragmatic, the sailor does not want to rush: "We are the first Chinese IMOCA project. We are two in the team. It's the beginning so obviously it's not easy. My objective is clearly to get to know my boat better at the moment. I'm keen to do one thing at a time until the next Vendée Globe." Although his project is still under construction, he can already count on the Chinese media, which is very enthusiastic, even before Jackie has started a race. "In China, there is a belief that says you can get rid of your worries by "throwing" them into the sea. Through a major national media, people have written to me about their annoyances. I will read them out at sea during my Atlantic crossing. That way, they will be rid of them." This operation was a huge success in China: a good omen for the continuation of this project! 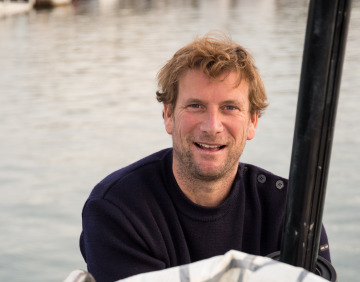 The story is unusual. Until a month ago, François Guiffan was project manager and technician in the IMOCA Kattan team. Following back problems at the end of the summer, the skipper and owner of the boat, Pierre Lacaze, finally decided to let him take the helm: "This awakened many things in me. I had tried to set up a Vendée project four years ago with this same boat. Now, by racing the Route du Rhum, I'm entering the race for miles for the next Vendée Globe." This is a golden opportunity for the Finisterian, who has been working with IMOCA teams for twenty years and is now allowing himself to dream of sailing around the world. To continue the adventure after the transatlantic race, he is looking for new partners. Although experienced in IMOCA, he has never raced single-handed. "My qualification went very well. I did some training sessions, but it was very short. I know the boat very well. If I have any technical problems, I think that's a plus." And if that's an advantage in any race, it's even more so in a round the world race! As Michel Desjoyeaux used to say: the Vendée Globe is a pain in the ass every day...

2028, the right timing for Rodolphe Sepho 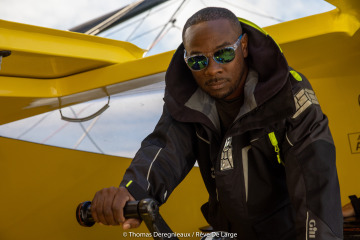 The Guadeloupean public came out in force to applaud his skipper on his arrival in the Saint-Malo lock. Although this is his very first solo race in an IMOCA class, Rodolphe Sepho has already competed twice in the Route du Rhum in a Class 40. Today, with Arnaud Boissières' former IMOCA, he is developing a project for the blue economy to help young people in Guadeloupe: "Through this project, we would like to develop sailing in Guadeloupe. After the last social crisis in the Caribbean, we would like to offer perspectives to our youth. We are trying to unite people around the project and give young people a taste for the sea." After the Transat Jacques Vabre in 2021, which he raced on this boat with Arnaud Boissières, the IMOCA stayed in Guadeloupe. He only returned to mainland France at the beginning of the month. In order to take the time to build his project, Rodolphe Sepho's goal is to line up at the start of the 2028 Vendée Globe. This is a dream that has been built up over the course of his sailing career. He is aware of the magnitude of this challenge: "The Vendée Globe is terrifying! Today I dream about it because I have matured, I have grown, I have evolved as a sailor. I see it as the culmination of my career. I prefer to take my time." After the Route du Rhum, the project will take a new turn, more oriented towards competition and performance. He will then have to go back to mainland France, because today, the Guadeloupean infrastructures do not allow him to stay on his island in this perspective. 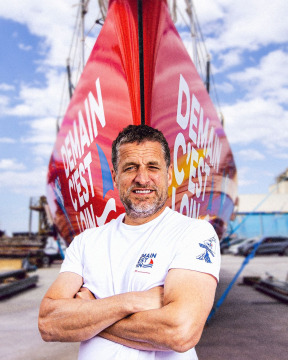 Three days late, Nicolas Rouger has finally reached the docks of the Corsican city. The reason? The sailor made the unexpected purchase of a new keel for his IMOCA Tomorrow is far (Miranda Merron's former boat on which the sailor competed in the last Vendée Globe). The keel was fixed the day before the start of the delivery trip to Saint-Malo. However, the sailor from Sète docked his boat Demain c'est loin alongside the 37 other IMOCA boats: "I'm really impressed to be here," he declared on his arrival. His atypical project was born in the Mediterranean. He asked an artist from Sète, Hervé Dirosa, to decorate his sails. To finance his project, the artwork is cut into 240 pieces and offered for sale to art collectors. To make this idea technically possible, the artist actually painted a replica of the IMOCA sails in cotton canvas. Nicolas Rouger's sails will be flocked in the same way as the artwork. At the end of the Vendée Globe 2024, the pieces of canvas will be affixed to the real sails, which will make up the 240 pieces of art. Today, 60 pieces have already found buyers. And the uniqueness of his project does not stop there: "I wanted a project that would bring people together. Sailing is not a very open world, so I wanted to open it up a bit. He decided to call the project "Demain c'est loin" (translation : tomorrow is far) in reference to the famous song by the French hip-hop group I AM. The group became the godfather of his project towards the Vendée Globe 2024: "For me the Vendée Globe is tomorrow. You have to see things in a simple way. I sail, I tell a story. In the IMOCA class there are some great stories! I'm happy with mine." While the sailor has been dreaming of a single-handed round the world race since he was very young, he is philosophical about the programme for the coming years: "The Vendée Globe is the ultimate goal and there are many ways to get there. On my path, there are some bends! You have to believe in it." And if the Vendée Globe is tomorrow... Is tomorrow really so far away?