Home News Germany's Riechers On A Good Course For 2024

Germany's Riechers On A Good Course For 2024

Having had to the watch the last two Vendée Globe races from the side lines after his previous projects foundered 53 year old French based German skipper Jörg Riechers feels he is in the best shape possible to be on the start line of the 2024 race and finally conquer solo ocean racing’s pinnacle event.

Riechers, a 35 year ocean racing veteran has carefully built his career through Mini 650 and Class 40 successes claiming a record of 50 podiums from over 70 races including top threes on the 2019 Mini Transat and one third place on the Transat Jacque Vabre in Class 40 and a victory in the Solidaire du Chocolat in the Class 40 as well. The Vendée Globe has been top of his ambitions for many years and had boats for the last two races, projects – both with remodelled existing boats - which did not work out.

Speaking as the design of his new IMOCA is being completed and the build of  ‘Alva Blue’ – backed by Alva Yachts a premium maker of electric powered, sustainable luxury yachts - is due to start in Portugal late January Riechers says “Everyone who plays tennis wants to play at Wimbledon, the Vendée Globe is solo ocean racing’s pinnacle. And so it is a shame I missed the last two races for various reasons but I never stopped thinking about it for a second. I did a lot of racing in other classes and developing my sailing skills. If I had done the race in 2016 I would not have been ready in my head. It would have been too early. Right now I am in the best possible state mentally. It is like I have a great design group around me which I can lead to build a boat which is designed for me, I have control of all the parameters, I have an investor who is 100 per cent behind me I have one of the best set ups I could imagine. And I think it better to be able to do at least one good Vendée Globe than two shitty ones.”

He has put together a strong design team, bringing Farr Yacht Design – designers of the 2008-9 winner Foncia (which just finished fourth as Yes We Cam!) back into the forefront of the IMOCA arena, working with long time collaborator Étienne Bertrand, a scow pioneering expert who Riechers built his first Mini with in 2009 in a garage near Paris, Guillaume Dupont and Agustin Lefebvre. Inspired partly by the cohesion of remote working America’s Cup design groups, Riechers’ design team are on course to deliver a boat which will incorporate a number of new ideas.

“It is an experienced and open minded team.” Contends Riechers who was born in Hamburg but lives in Caen in NW France, “Farr for me have so much experience of R & D, VPP and CFD and all the organisation sides which you won’t really see in the finished boat. Farr’s Britton Ward is really strong on numbers. But Britton and Etienne are complete opposites. Etienne is all about gut feeling and intuition, Britt is really numbers driven. The two together gives you the best of both worlds. I know both very well, Britt from the work we did with the old Foncia in 2013 and then Guillaume Dupont joined the team when he worked on the Cape Racing Class 40 in 2020 and he has a lot of recent IMOCA experience after working on Charal, Hugo Boss and 11th Hour. The whole team seems very logical and Agustin Lefebvre works with Guillaume. He is responsible for the cockpit and the design of the deck and he has come up with some very, very clever ideas.  That is one of the most exciting aspects of the boat, looking at what the others are doing and have done we are completely different.”

Like most others building new for 2024 Riechers is well down the scow (rounded) bow approach but cautions, “ I am trying to find a good balance between the power of the hull and low wetted surface. Etienne Bertrand who has a lot of Scow experience starting to work in 2017 on the scow concept (NDLR designer of the Mini  Vector 650). He designed my Mini in 2017 which is the boat on which I finished second on the MiniTransat and afterwards he designed the Vector another series Mini second on this year’s Mini Transat – along with David Raison in terms of Scow design they have the most experience and in terms of designers are the ‘weapons of choice’. 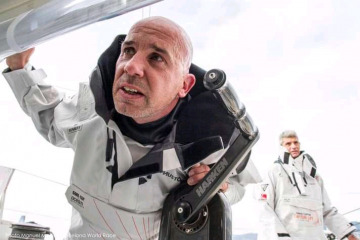 One of Riechers’ different approaches, he promises, will be the cockpit and deck layout, “It will be a closed cockpit but not like Hugo Boss or Apivia it will be completely different, a little bit inspired by the Ultimes. One of the priorities is the comfort for sailing. We have inversed a little bit the dominance of weight and low centre of gravity. If the centre of gravity is a little bit higher and maybe the boat is 100 kilos heavier that will not make so much difference when you can drive the boat very hard all the way around the world. You have to be comfortable living or you can’t sail fast.”

When the boat is due to start building in Portugal in early February for a launch March-April 2023, Riechers will be in the early stages of training for a season in the Figaro class, a move designed to sharpen up his racing skills. He will race Xavier Macaire’s boat and train with Macaire’s group at the Team Vendée Formation. Of his own potential Riechers smiles, “ I have no expectations there at all.  It is about getting pounded and race hardened. If I am in the top 15 I will be very, very happy. I know the Figaro is the hardest, toughest class. That is why I am doing that. I have done all I can in the Class 40 and Mini and have nothing to prove. It is the best preparation.”

Clean Energy
Whilst his budget is sufficient to do the Vendée Globe he and Alva Yachts are looking for commercial partners to benefit from an association with the programme which will be entirely using renewable powered electrical energy. “We are fully funded and also for the Figaro season by Alva Yachts with enough money to do it all, but in any case we would like to invite commercial sponsors to join us as it is more fun to do it with other partners and also for Alva Yachts they would like to monetise the space on the boat and they would like to use the boat as a commercial hub for their range of luxury cruising catamarans. As the Vendée Globe is now in the group of the leading sporting events it is a very good platform for any kind of sponsor. They are very much involved in the development of the pilots and the electrics on the boat because the boat is fully electric as are all their cruising catamarans. We will be all electric with no fossil fuels at all, not a drop.”

While Boris Herrmann has already stolen the honours as the first German skipper to complete the Vendée Globe, Riechers is keen to renew the rivalry on the race course, whilst fully acknowledging the great job that Herrmann has done popularising solo racing and the Vendée Globe in their native country.

“He has been a good accelerator it has helped everyone. The awareness is much higher and helps everyone when you go looking for sponsors.”

Which begs the obvious question…..now you just want to go and beat him?
“ For sure. I mean I am not doing the Vendée Globe to make up the numbers I am doing it to get a good result. A good result implies I want to beat everyone and that means Boris. Beating Boris does have a certain charm. Driving in an F1 team the guy you want to beat most is often your team mate. And it is not like we are in the same team, but being from the same country I want to first of all beat Boris and then I want to also beat everyone else. I don’t want to be second German, no way.”