After recently acquiring an Imoca, Tanguy Le Turquais is methodically working his way up to achieve his goal of competing in the 2024 Vendée Globe. While he is still busy looking for partners, the sailor from Brittany is determined to see his project take shape and wants to adopt a respectful and virtuous approach.

For once, Tanguy and his sisters were able to watch TV. That was not something the Le Turquais family often did, preferring not to let the three kids get drawn into the screen when there was plenty to learn at school. But in the winter of 2000-2001, there was something more interesting to watch than Jimmy Neutron, Scooby Doo or Kim Possible: there was Michel Desjoyeaux, Ellen MacArthur and the others. “I must have been ten back then and that’s when you get easily fascinated by things,” quietly explained Tanguy Le Turquais. “Ellen MacArthur’s Vendée Globe (2nd) is what I remember most and I watched her finish through a child’s eyes. That’s when the dream started.”

While the English sailor won over everyone’s heart, including that of the young Le Turquais, it should be clear that it was Tanguy’s Dad who prepared them for the way. A sports instructor in Brest and professional gymnast, he contained his passion for the sea by sticking to the enclosed space of the gym or our on the football field, but the passion for the sea was always there above all. Tanguy: “Like everyone from Brest, my Dad worked in the dockyard and did some Optimist sailing, but it was when he divorced my mother at the age of 40, that he decided to live out his passion. He bought a 10-m steel boat and decided to live on her with his three kids. He certainly dived in!”

And then there was family trips to the Scilly Isles and Portugal. “Was my Dad a great sailor? I don’t really know, but he had a close friend, Hervé Le Gall, who took part in the 1989 Mini Transat (on a prototype, aboard Locminé Entreprises, editor’s note). “They came across each other where we were all living in the harbour in Vannes at that time. It was not down to chance that I got interested in the Mini, as it was going on when I was a teenager.” Particularly as in 2003, his father got the taste of ocean racing following the Mini-Transat all the way aboard an accompanying boat. As such it was the  sort of adventure that gives you plenty to talk about down on the  Eric Tabarly and Bernard Moitessier Quays.​

Until then, Tanguy ate, slept and dreamed of windsurfing, even if he had posters of Michel Desjoyeaux and Yves Parlier on his walls. “Obviously I dreamt of the Vendée Globe, just like other kids dream of being a fireman or astronaut: and not really believing it would happen. So I focused on my board. My parents didn’t have a lot of money, so I couldn’t sign up at a sailing school. But I studied boat engine repairs as I already had a grounding from my father. One day I went to see La mouette sinagote (a sailing club in Séné, a paradise location in the Gulf of Morbihan, editor’s note) and offered them a deal: ‘I dream of windsurfing. I can’t pay, but I can repair your engines.’.” They shook hands on it and Tanguy was able to go windsurfing and sail a dinghy. “At my sixth-form college, I was able to go on a First Class 8; apart from that I did repair jobs and some sailing. Just like any other Breton, but I didn’t go down the usual track.” 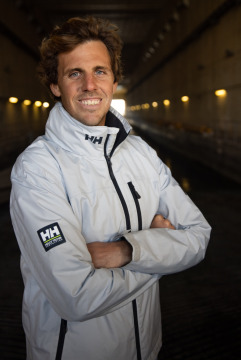 In fact the Mini-Transat, the "handyman's race" was quite suited for him as a graduate of the Merchant Navy and the Institut Nautique de Bretagne. His studies in mechanics opened new doors to him, going offshore racing. He was fourth overall on the Mini 650 ranking in 2013 (6th in the Mini-Transat), third in 2014 (2nd on the Les Sables-Les Açores-Les Sables), winner overall in 2015 with a third place on the Mini Transat and two victories and podiums in the other races of the season.

Next step
The next step was the Figaro class, “to learn to race, before stepping up to the Vendée Globe project. The results of these four seasons were good, ending with two solid results won with Corentin Douguet, whom he enjoyed sailing with and learned from.

The witty and mischievous co-skipper Douguet is a master of "boar racing", the expression given to times  when the brain is packed in waterproof bag and the boat is driven more by intuition and feel in the bif winds and seas. They got second place in the 2021 double-handed Transat, fourth place in the Sardinha Cup and third place in the Solo Guy Cotton, solid results on his Figaro report card.

Now he is facing the challenge of the Vendée Globe, pushing on to try and fulfil that youthful dream. “It was great to do the Figaro. I loved it and I'm not saying I won't go back, but I turned 32, and I didn't want to wake up in ten years and realize that I missed out on my dream ".

Looking towards what he thinks might be “perhaps the last period of big risk-taking of my life”, Le Turquais has launched himself wholeheartedly into his project.

He admits that before he has been “a little embittered to see the others leaving for the Vendée Globe… but in reality, I found excuses not to press on and go for it. The reality is simple: if you don't try, you won't succeed."

He is only too aware of the sheer magnitude of his betting on himself to make the 2024 start line, speaking with as much excitement as apprehension: “I left an ultra comfortable and exciting professional situation: I was sailing and I was making a living, being paid for it. But I left this comfortable situation to jump out of a plane, without a parachute. I put my whole life into this Vendée Globe project. I have a boat bought by investors and banks. I don't have a sponsor yet, but I have the boat! You have to succeed in moving forward in an adventure that is costing you money all the time. Even parked at the pontoon, an Imoca costs money. It's very stressful... but every morning I get up and go for it. It's exciting."

He does not often mention his wife Clarisse Crémer whose dazzling nautical career is a model in many respects. They ticked the same Mini and Figaro boxes, often together and they met there. Crémer an HEC (Editors note: a well known French international business school) graduate, knows more about marketing strategy and how to propose a project to business leaders, so she helps her partners a lot, while they share the same form of spontaneity in their way of saying and doing things.

Asked the big question: “How would you define yourself?." he responds:

“If I get there, it is because I am a big dreamer."

“ When we were little, we sometimes ate thanks to the Restos du Cœur ( a food bank). Now here I buy a boat for one million euros (the former Groupe-Apicil with which Damien Seguin finished seventh on the last Vendée Globe). I do it because I have my dreams and because my meeting with Clarisse probably helped me structure myself. Maybe I won't make it, but I do everything I can to get there. And there are people who are kind enough to want to help me. I feel thankful, I'm happy that people find interest in what I want to do. I need a healthy and caring environment around me and I won’t compromise the well-being of those who will work on my project on the pretext that it will serve my own well-being. I want to tell a beautiful story of a human project, with strong, shared values, with the right partner. On the water, we will not win, but we will fight and we will do everything to complete the Vendée Globe”.

Translated from the French article by Fred Pelatan