At a meeting held today (Wednesday 29th June) in Les Sables d’Olonne with the organisers and skippers competing in the eighth Vendée Globe, Yves Auvinet, President of the SAEM Vendée made an unexpected announcement. Three extra places will be made available on top of the 27 initially planned in the Notice of Race. If all of the sailors complete their sailing and administrative obligations on time, no fewer than 30 skippers will be able to line up at the start of the non-stop solo round the world race on 6th November. This is good news for several reasons, including the internationalisation of the Vendée Globe, as ten nations may be represented, which would be a record in the history of the event.

For logistical reasons in Les Sables d’Olonne (the number of places available on the pontoons in Port Olona), the Vendée Globe Race Directors decided to limit the number of skippers taking part in the non-stop solo round the world race to 27. The department, which owns the Vendée Globe wished to open up this limitation. At the moment, 30 skippers are officially registered for the 2016-2017 Vendée Globe (see the list below). Kojiro Shiraishi, Jean-François Pellet, Conrad Colman and Enda O’Coineen are the first to be affected by the announcement made on Wednesday by Yves Auvinet, Président de la SAEM Vendée the president of the SAEM Vendée. “I am in favour of offering three extra places on top of the 27 planned in the Notice of Race. If sailing requirements are met by one or all of the skippers on time, it would seem inconceivable to me not to allow them to line up at the start. When you see the investment made in preparing for this race, I believe that if all the conditions are met, everyone should have their chance to compete in the Vendée Globe.” 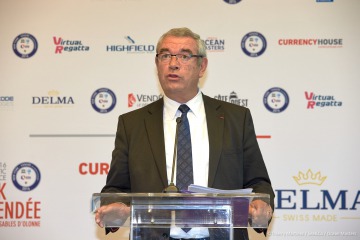 © Thierry Martinez / SeaAs for the logistical problem limiting the number of places on the pontoon in Port Olona, Yves Auvinet confirmed that a solution has been found. “We have consulted with the Race Directors to ensure that this can be done within the harbour. And that is certainly the case. The Notice of Race simply needs to be modified to take this into account with the addition of another amendment (amendment  n°2).”

These additional places should allow the next Vendée Globe to become even more international. If all the candidates manage to find their budget and fulfil the administrative and sailing requirements on time, four continents and ten nationalities will be represented: France, Spain, Hungary, the United States, Britain, Switzerland, the Netherlands, New Zealand, Japan and Ireland. This will be a first, which is very pleasing news. Another important number. Nine foreign skippers may take part in the solo round the world race, which represents almost a third of the fleet.

A press conference on 14th September

On Wednesday in Les Sables d’Olonne, Yves Auvinet also confirmed that the official press conference presenting the line-up for the 2016-2017 Vendée Globe will be held on Wednesday 14th September at the French Stock Exchange in Paris.

The 30 skippers officially registered for the moment:

Enda O’Coineen, the first Irishman in the Vendée Globe

Stéphane Le Diraison: “I’ve been working towards this”