Over the past thirty years, the boats sailed around the world by solo sailors have gone through several radical design changes, firstly for safety reasons, but also to adapt to more stringent class rules. However, the boats have continued to improve in terms of performance with each edition of the Vendée Globe. In the first non-stop solo round the world race, the winner Titouan Lamazou took 109 days and 8 hours, while François Gabart has held the record since 2013 after completing the voyage in 78 days and two hours, or in other words an improvement of 25% in spite of the race course being around 20% longer.

Ocean racing is probably the mechanical sport, which has changed the most over the past thirty years. The first 60-foot boats dsigned to sail around the world date back to the 1996 BOC Challenge, the second edition of the solo round the world race with stopovers. But since then, when the winner was Crédit Agricole III, a boat built of aluminium and which was heavy and bulky, weighing in at 15 tonnes, designers have tried to find ways to increase power, while reducing weight. So, in the first Vendée Globe (1989-90), there were no real design constraints, apart from the length of the hull, but with each passing edition, the domination of wide “sleds” with a lot of ballast and sail has been thrown into question, particularly after the tragic 1996 race, when three boats capsized (Dinelli, Bullimore, Dubois) and one sailor was lost (Gerry Roufs)… 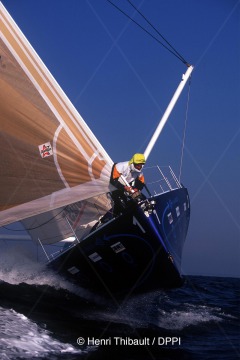 While they have tended to become more reasonable with IMOCA class rules, which take into account the stability of the boat and imposes safety gear, the 60-foot boats have continued to include innovations. In 1996, Yves Parlier set sail around the world with the first wing mast. In 2000, Michel Desjoyeaux won with a canting keel, which allowed the boat to be stiffer. Then, there were the asymmetrical daggerboards, more ballast tanks, huge progress in terms of weather forecasting with the use of Grib files and on board routing systems, sails which no longer lost their shape and hulls made of pre-preg carbon…

IMOCA boats took the time down to under 100 days in 2001, completing the round the world voyage in 90 days in 2005, then in under 85 days in 2009 and in 78 days in 2013. Yet, class rules have become increasingly limiting with a maximum beam today of 5.85m, a maximum draft of 4.5m, an air draft of 29m, a maximum of five appendages, minimum freeboard height and coach roof volume… There have been changes in leadership in terms of the design teams: Finot-Conq, Lombard, Owen-Clarke, Farr, Kouyoumdjian, then VPLP-Verdier with straighter lines and rounder bows to increase lateral stability.

However innovation costs money and in 2013 the skippers planned to move to a one-design boat to keep costs down. The idea was rejected, but certain elements of the puzzle that makes up a 60-foot IMOCA were standardised (mast, keel) and the volume of the ballast tanks limited. Inspired by the catamarans in the America’s Cup, the designers came up with the idea of adding foils to lift up the hulls and increase the boats’ speed and power. Six new prototypes have been fitted with these new appendages and one older boat modified to include them.

But because the 2016 rules limit the number of appendages to five (a keel, two rudders and two daggerboards), the designers had to think of a dual function appendage: an anti-drift role to stop the boat from moving sideways when sailing against the wind and with the function of lifting the boat up in addition to the canting keel, which also contributes to that. The tip of this foil is the key element for the former, while the elbow helps raise the boat, and the shaft, which comes out of the hull, is just a way to support the tip. After a number of sea trials, the skippers and designers defined the best adjustment possible, remembering that class rules forbid the modification of the incidence of the foil. They then changed the shape from the initial designs to enhance performance, in particular when sailing upwind. 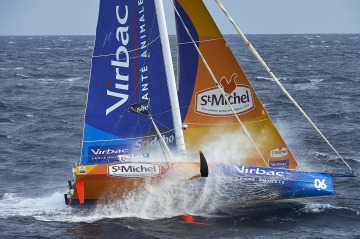 © Y.Zedda/StMichel-VirbacNow, all of the foilers are fitted with version 2 (except Hugo Boss following damage to the foil), but each one has gone for a small difference, with the aim of cranking up performance: doing better upwind, more powerful with the wind on the beam, raised up when sailing downwind… There is a significant gain in power thanks to the foils at between 70° and 120° from the real wind. That is when the appendage in conjunction with the canting keel raises the hull up, reducing drag and offering an increase in speed of two knots in comparison to a traditional IMOCA without foils.

This latest design feature is now better tuned after a year of tests, but there are still questions about the outcome in the non-stop solo round the world race. Which of the boats will survive? Those that fly on the water with their foils or those that are simply lighter. Who will come out on top after two and a half months of sailing around the three oceans, where there is a huge range of weather conditions from Southern storms to equatorial calms? We should get the answer around 20th January 2017 in Les Sables d’Olonne…