> News > Food for thought: what the skippers eat

You probably have never asked yourself what you are going to eat for breakfast, lunch and dinner between 6th November and late January or early February 2017, but this is something the Vendée Globe skippers have to think about well in advance. They also have to take into account different considerations from us. Firstly, they need to eat more to compensate for the energy they require, which is much more than someone sitting in an office. It is thought that the daily energy requirements of a Vendée Globe sailor is around 4000 kilocalories  - in any case, somewhere between 3500 and 5000 kilocalories or more – while back ashore, we only burn up 2800 calories on average. In the coldest parts of the planet, a Vendée Globe skipper needs twice as many calories as someone at home. 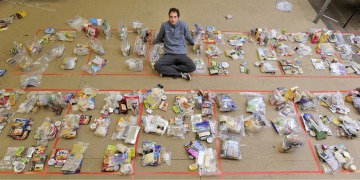 Plan for more? It’s not as simple as that. They want to have just the right amount, as they have to pay attention to the weight taken aboard, as this can seriously affect performance. The weight of the food is far from being unimportant: 120 to 180 kilos of supplies (with the cleaning and personal hygiene products). When they calculate the ideal amount, the favourites work on the basis of 80 to 85 days of food, with the others taking more with them. We must not forget the timing either. We don’t have the same needs or desires in the tropical heat as in the wilderness of the Southern Ocean. That is why some skippers only trust themselves when preparing their supplies. In any case, they always want to keep a close watch on what is going aboard. If they get someone else to do the job for them, it’s usually someone very close to them, who knows them well, or a dietician. Morgan Lagravière explains, “It’s essential to eat well. It’s one of the pleasurable moments, as well as being our fuel, as it gives us energy. I haven’t handed this task over to someone else entirely, as I believe it is important for me to be involved in selecting the food and how I stow it on board.” Fabrice Amedeo has been working with a sports nutritionist, Virginie Auffret. She explains, “To understand what Fabrice needs, we examined his eating habits ashore and during races. That enabled me to draw up menus to suit his needs. The aim is to avoid excessive weight loss, while allowing him to enjoy the food, by studying the quality of the dishes and what they bring him.”

We should not forget that food has an influence too on our sleep. The nutritionist, Eve Tiollier, who works with Jean-Pierre Dick, explains, “alongside the bags of food offering the recommended daily intake, Jean-Pierre has an additional bag, in which he has sweet food or protein-rich food, which encourage him to sleep or on the contrary, stay awake.”

One bag a day

While some, like Arnaud Boissières only take aboard freeze-dried food, for many skippers, the supplies include 40 to 50% vacuum packed meals and 50-60% freeze-dried. Even if the latter has made considerable progress ove the past ten years in terms of variety and taste, they tend to be less appreciated by the skippers than the ready prepared meals. They do however offer a number of advantages: they don’t take up much space, they are very light and fulfil the nutritional requirements… particularly as the fresh water that is used to prepare them is supplied by the desalinator. They just have to heat it up on the ring (camping stove), stir in the sachet and it’s ready. Erwan Steff, director of Yann Eliès’s Quéguiner-Leucémie Espoir team explains, “The supplies are divided up into seven watertight bags weighing a total of 175 kilos. The date is marked on them for Yann, remembering that he will eat different ly depending on the conditions and the temperature. Inside there are little zip bags corresponding to the day’s meal.” Of course, all that has to be stacked depending on which tack the boat is on to balance the boat, just as they do with the sails. Jérémie Beyou, Vincent Riou and many others use a similar approach in organising their food. Sébastien Josse has been spoilt, as he is taking on board meals prepared by Julien Gatillon, Michelin starred chef of the 1920 restaurant in Megève. “What he cooks is really delicious,” Sébastien told us before giving us another anecdote, which tells us a lot about the psychological importance of food on board: “Once, I managed to keep an orange until I got to New Zealand. You protect it like a valuable item, and when you bite into it, it’s magic!”

Then there is another important aspect to consider with the food. The question of pleasure. This is in fact vital, as it affects the mood and therefore the performance of the skipper. Alex Thomson has already calculated with his coach, Lawrence Knott, that he may lose around twelve kilos during the race and has therefore adapted his supplied accordingly. But he has not forgotten peanuts, as “when the going gets tough, the simple pleasure of opening a packet of peanuts can be the highlight of the day!” Some take sweets, chocolate, jelly babies, fruit pastilles, hazelnuts… in other words something to nibble. Others like Vincent Riou take on board vacuum packed cold meats, which is their little pleasure for the day, while others go for cod liver, sardines in oil or tins of pâté. And we must not forget the foie gras for Christmas, the special bread from Les Abers or la Trinité, which can be kept for the first fortnight of racing.

To conclude this subject, while what is available has come a long way – you can find practically every dish possible freeze-dried and their taste has vastly improved. There has also been scientific progress. Kito de Pavant will be monitored during the race to analyse his nutritional situation. Professor Patrice Darmon, Head of Endocronology, specialising in the metabolism and food at the Hospital in Marseille, explains that this study is not only useful for drawing up diets for skippers to improve their physical performance and mood, but also this will be a way to find better solutions for feeding people in extreme conditions, who undergo repeated stress and/or people with irregular work hours.” 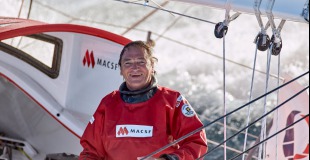 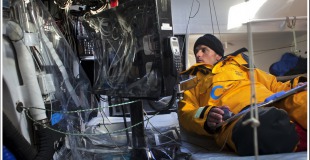 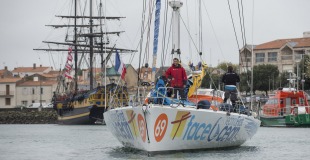 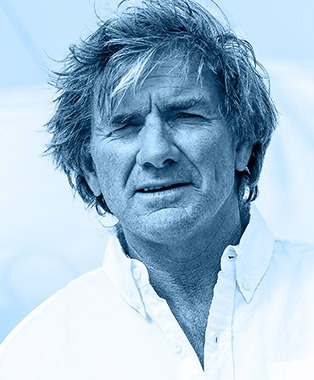