Home News My Way Back

A first timer in this Vendée Globe, were it not for the bright yellow No Way Back sailing team jacket, Pieter Heerema might otherwise pass anonymously through the crowds in Port Olona. The Dutch businessman is looking to realise a 20 year dream of racing around the world.

A vastly experienced racing yachtsman who is known to be ultra competitive in the classes in which he has raced, including the 470, Yngling, Js, Dragon and more recently the RC44, Heerema’s meeting with Michel Desjoyeaux was the catalyst for a programme which has successfully raced the clock. Initially Heerema was considering Alessandro di Benedetto’s Team Plastique when news came that Andrea Mura’s new build VPLP-Verdier design might become available because his backers could no longer fund the programme. It was an opportunity Heerema seized. In truth his choice of boat was made only late last year, coming relatively late in the four year Vendée Globe cycle when there was a scarcity of good boats still available, is a brave one for a skipper who had so little solo and IMOCA experience. But the 65 year old has knuckled down to the learning process, spending training periods in the Atlantic from the Canary Islands, competing in the Puerto Calero Transtlantic Race and the New York Vendée. 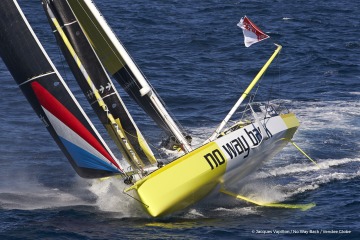 His goal is simply to complete the course, to return fulfilled to Les Sables d’Olonne. And that means suppressing his competitive urges as much as possible and instead sailing smart, safe and solid. That will be tough at times, akin to an avid petrolhead taking the latest generation F1 car around the roads of the world. He is someone who loves speed, technology and excitement. “In the Vendée Globe I am not really that much of a competitor,” he cautions with a wry smile. “For me this is an adventure, a chance to complete a circle around the world, and what I am on the finish does not keep me awake at all. But on the other hand I like speed, I like action, I like technology. That is what has driven me to a boat like this and to prepare my new foils, the set up of the sails which I have worked on with our sailmakers and designers. It is not intended to be a slow trip. But where I cross the finish line does not concern me at the moment. That is totally different from my ‘normal’ sailing when I am considered by many to be ultra competitive. I like sailing but when I race I want to do really, really well.”

He considers he is able to switch between race and sailing and has sailed many of the world’s oceans and seas already. He has already been around Cape Horn. “I cruise too. And enjoy it. Not many racers can switch over. I have been across the Atlantic twice, cruised the Caribbean, spent a whole winter in the Caribbean, up the west coast of Canada and Alaska, down the west coast, through the Pacific to New Zealand. I have been in the south, I sailed around Cape Horn in 2008. The first leg was New Zealand to Argentina and we got into Mar del Plata and were totally wasted. I went into a hotel and woke up 16 hours later. So this time it will be solo and a very different challenge. So, yes, I have been in the South on a totally different boat and circumstances, but it helps to have seen it and felt it, to know a little bit of how cold, wet and scary it can be. But this is a different beast. It weighs one third of the Swan 56 and has probably three times the sail area. Sailing this thing alone through the south is going to be very different.” 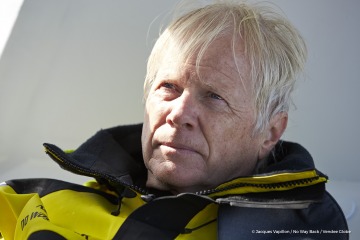 But a cautious strategy early in the race will be essential: “I think the worst thing for me would be to round Finisterre in third or fourth place! In my racing sailing I have sailed in Dragon fleets of 80 or 90 boats in a two boat programme with the famous coach Rod Davis. And he would say ‘If I see either of you in the top 10 at the first mark you will get punished.’ But by that he meant don’t go off too hot. And it is definitely the case for me here. If you go too hot into it then you can do wrong things. So I should not be in the first group early on or the old racing mentality will kick in and so I just have to be consistent and make nice average speeds. In the active sailing world the reception has been 99,9% very positive to what I am doing. In the Netherlands they are super, super, super positive, a little too much so. They want, hope, think that they expect all kinds of things in a racing sense. That is a difference the French accept. Getting back, to them, is a major achievement. And they just quietly wish you bon courage, bonne chance, they don’t say anything about winning, having a good result. There were some Dutch here and they were saying ‘you gotta finish top three’ and so that is the reason we have 30 of these high tech racing boats here. Go to the TP52s or the RC44s and there are seven or eight boats and here we have 30 boats. It’s an incredible thing.”

How the skippers communicate with those ashore