Home News Loïck Peyron: "The Vendée Globe is a race and adventure"

Runner-up in the very first edition of the Vendée Globe (1989/90) behind Titouan Lamazou, Loïck Peyron, who is busy preparing for the America’s Cup with the Swedish team, Artemis, was down on the Vendée Globe pontoon to greet the sailors yesterday.

Loïck Peyron and the Vendée Globe… you’re one of the founders of the legend?

“Yes, I’m not one of the founding fathers, but when Philippe Jeantot launched the idea of a non-stop solo race around the world, I thought it was a brilliant idea. That was in 1986, and I was 26, so I told myself I’d do it. In 1989, I was therefore here in the harbour in Les Sables d’Olonne, after a tricky year working on Titouan (Lamazou)’s old boat. There was an incredible start. Everything was incredible about it. It was a voyage into the unknown. I had never been around the world, just across the Atlantic a bit.” 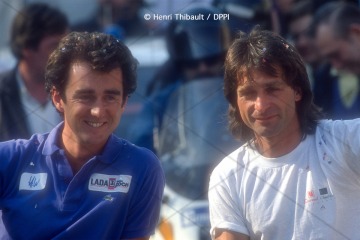 Do you see yourself as a pioneer in this race?

“I was a young rookie, not a pioneer. I followed in the footsteps of the pioneers. We weren’t the first to race around the world. There was the Golden Globe with Moitessier and Robin Knox Johnston. Robin, whom I talked to recently on the phone, wants to race in the next Route du Rhum on a small boat... They were the real pioneers. In the first Vendée Globe, we were following them. The difference was that we were racers and not just adventurers. Even if the race is now the key part, it remains a big adventure. In this year’s race, there are in fact more adventurers than racers.

I can remember the crowds lined up in the entrance channel in Les Sables. It was crazy. When we returned, it was incredible. You have to remember that the means of communication weren’t the same. We were returning from the unknown. I tell myself every day how lucky I have been to continue to sail on all sorts of boats and to have done the Vendée Globe.” 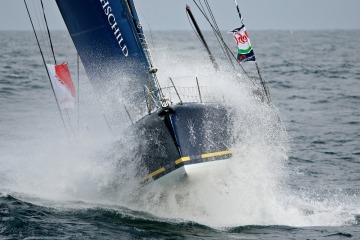 Are you frustrated about only completing one of your three attempts?

“Lining up three times and finishing once. That matches the statistics for the Vendée Globe. Only around 50% of the fleet finish. It’s frustrating, but that’s the way it is. In 2008, it was all the more frustrating, as I was doing well with Gitana 80. Everything was perfect. I had been in the lead throughout mot of the first month and then my boat was dismasted. It’s part of the game. Worse things happen.”

So is the Vendée Globe a race or adventure?

“Both things. Some want to finish, while others want to win. Finishing a Vendée Globe is an adventure, and it’s a huge adventure getting to the start. That’s what makes this event so interesting. It’s one of the rare competitions, where adventure still reigns which ever boat you have. There is something down to chance, uncertainty, so it is an adventure.”

What do you think about the foils?

“It’s only normal that things progress. We want to perform well. I don’t know why that is. We don’t always have to be more beautiful, faster, stronger, richer. That’s why I like one-design boats. Man takes time to master the machines he comes up with, but he gets there in the end. Eric Tabarly’s Pen Duick II launched in 1964 was a mad idea at the time – too big and too powerful. A few months later and she was already out-of-date. Things change all the time.

As for the foils, I’m spending my time foiling in Bermuda at the moment. It increases the stress for the skipper. Those who have foils will be able to be faster, but will they go further? We’re talking about uncomfortable boats, which are stressful in terms of speed, rather like solo multihull racing. It’s demanding and you have to remain alert."

What are your forecasts for the 8th Vendée Globe?

“I’m not making any predictions and don’t have any favourites in the Vendée Globe. It’s impossible, as there are so many factors you can’t control. The power comes from the boat and the sailor. But above all there is a sailor, who respects his boat and himself.”