Who could imagine such a wide range of landscapes between islands that are so close together? They are all equally surprising. The contrast between the bare surface of the most western island, Lanzarote, and the Alpine evergreen forests of Tenerife, between the huge sandy beaches of Fuerteventura and the cactus fields of Gran Canaria… Moonscapes, deserts and rocky mountains...

The reason is partly down to the fact that the seven islands do not have the same climate, but also down to their geological origin. The soil on the islands closest to the Sahara indicates that they were part of the African continent, while the craters you can find on most of the islands show that there has been recent volcanic activity. The Teneguia volcano on La Palma was formed in.

The highest point in Spain

The contrast is incredible on Fuerteventura, where the dry hills and desert valleys mean that most of the 50,000 inhabitants live around Rosario, the only real port on the island, which has no other haven. There are no villages on its western side. On Lanzarote, the most northerly of the seven islands, black lava dominates, a consequence of the 1730 eruptions, which lasted for more than six years extending the coast five miles westwards. It was here that the sculptor César Manrique contributed to the local architecture building in particular the Mirador del Rio in the north of the island, and the cactus garden at Guatiza.

A few miles to the SW there is the cone-shaped Gran Canaria, home to the largest population of the islands. A real mini continent with its green strips in the north and desert landscape with cacti in the south. The economic capital of the islands, Las Palmas is a busy port with a variety of architectural styles, resulting from the combination of various peoples and the expeditions, which occurred during its history...

Dominated by the majestic volcano of Teide (3718 metres), Tenerife is the largest island in the group. There is a sharp contrast between the dry south and the botanical gardens at Puerto de la Cruz in the north, where Charles II of Spain planted tropical plants brought back from the New World and the Indies, the lunar landscape at Las Cañadas with the huge crater around Pico del Teide...

As for the sugarloaf mountain of La Gomera rising out of the Atlantic, with its deep ravines, fertile valleys, where you can find Barbary figs and primeval forests. It is here that the locals communicate with shrill whistles, allowing them to talk to each other over a distance of a few miles.

On La Palma, there is the biggest volcanic crater in the world with a diameter of over 5 miles and a depth of 800m. Thanks to its rainfall, the landscape is green. The island is home to several telescopes, which are above the clouds at an altitude of 2000m.

Finally, El Hierro is the most western island in the group. The iron island was even the geographical reference in 1634 when Louis XIII decreed that Punta Orchilla marked meridian 0...Until 1884 when Greenwich was adopted.

The Greek astrologer Ptolemy (90-168) referred to them as the Fortunata Islands and the most western point of the world, Ecumene. The Phoenicians and Carthaginians visited the islands to look for orchella, a plant used for purple dye. But it was probably King Juba II of Mauritania that gave the islands the name Canaries: big dogs ran through the primeval forests (Insulae Canium)...

The Berbers seemed to be the first to colonise the islands. The pre-colonial inhabitants came to be known collectively as the Guanches and were known for their fair hair and white skin. The first conqueror was from Genoa, Lanceloto Malocello. He arrived on Lanzarote in 1312, and the island became a source of slaves for Europe. The Guanches did not travel and each group on the islands kept their own traditions, as there was not any trade by sea.

Corsairs, pirates, adventurers stopped on the islands, but the Normans, Jean de Béthencourt and Gadifer de la Salle, serving Henri III of Castile, put down the rebellion by the Guanches, who held on at Fuerteventura, La Palma and Tenerife.
In the end it was the Spanish, who took over the islands with Fernandez de Lugo in 1495, while Christopher Columbus stopped on Gran Canaria in 1492 before discovering the New World. Used as a stopover point by Spanish sailors, the Canaries were frequently attacked by pirates and merchants of Arab slaves, but also by the English and Dutch: Francis Drake lost his flagship there and Nelson his arm in 1797 when he wanted to attack Santa Cruz de Tenerife.

The islands were united in 1823 and now tourism is one of the main activities on the islands. The climate is particularly mild with average temperatures around 20°C, rainfall between 300 and 500 mm depending on the altitude and relief, sea temperature between 19° and 22°C, and more than 3000 hours of sunshine per year, which is the most in Europe.
As for the wind, the trade winds blow in general from the NE and the breeze can strengthen as it funnels through the islands. Fuerteventura is an excellent spot for windsurfers...Sailors need to be cautious about the disturbances caused by the islands, as their relief causes calms and violent gusts for fifty miles or so around the islands. To reach the equator, it is often better to go a long way to the west. 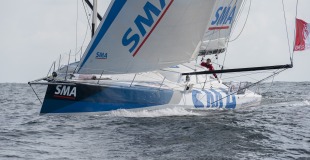 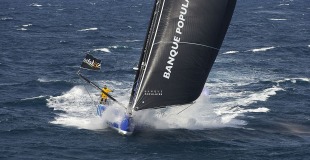 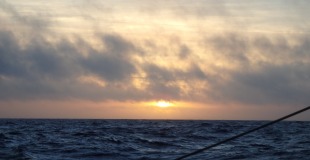 The other Land’s End