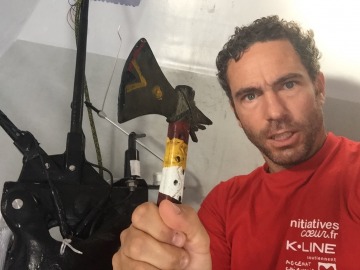 “I’m 120 miles from Cape Verde at the moment. At my current speed it’s not going to be possible to moor there in daylight hours today. Several people have warned me not to make landfall at night as there are wrecks and things to negotiate and I have a sail wrapped around my keel. With that in mind I’ll sort out 2 or 3 things on my way down there so I rig up some kind of mainsail to help with manoeuvring. I have a couple of options for tomorrow: either the port of Mindelo or Tarrafal. It’s a carbon tube that forms the masthead itself that’s snapped off, but all the mechanical pieces around it are intact. It’s not a big piece that’s broken off the masthead, 30cm maybe, and I have all the pieces so I’ll try to effect repairs. Essentially, I’ll endeavour to sort out the problems one by one and see what happens. The aim is to continue in solo mode and get back out on the racetrack under 1 reef main. I have 2 halyards left and I have 3 sails with which to make headway. I’ll do everything I can to make it work. I have all the resin aboard that I need. I can’t reattach the carbon tube but I have a spare wand I can attach to the transom so I can get wind mode and force on my autopilot.  I have the means and the desire to pull this off. The kids I’m raising money for are added motivation, as are my friends and family. I’ll use all my strength so I have no regrets. Things have worked out harder than planned but I’ll take the time I need and if it’s reasonable to do so, I’ll continue on my way.” 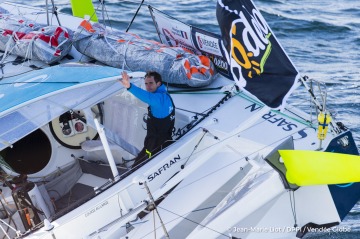 “All’s well aboard. I had 2 hours’ rest and then with the violent motion of the boat in my slightly groggy state, I knocked my head on the edge of the door and cracked my head open! It’s fine now though! Out on the racetrack Alex’s progress is interesting. He’s either very quick or a bit slow. There’s no compromise. At one point I was close behind him yesterday and then he powered off with the breeze. We’re sailing too open to really extend our foils and fly. Alex is in prime conditions for his lower foils and for now it’s paying off. We’ll see how things pan out. PRB is much more versatile whereas Alex has a very narrow band of performance.”

“The violent motion meant that I hurt my cheekbone, but it’s better now as it wasn’t anything nasty. I feel good out here. The start was complicated but conditions have been really nice in the North Atlantic: 20 knots, downwind sailing, sun, racing… who could wish for more? It’s a good thing I feel so at ease on the boat as I’m here for a while yet!  It’s good to have a reference with Yann and Jean close-by too so you can compare yourself and see if you’re carrying the right sail. I’m in good company. I look at every ranking and try to go faster. My primary objective is to finish the race and bring back the big humming bird! (Symbol of his partner Projet Imagine that brings anonymous heroes into the spotlight to inspire us to great things and to carry a message of hope). 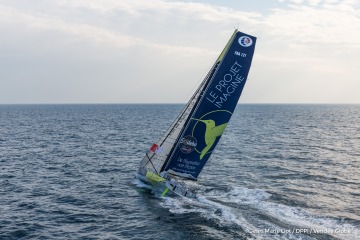 “It’s not been going too badly for me. I have a slight problem with the engine. I somehow managed to fill it up with water. I’m not really sure how that’s happened but we’ll work on that. I’ll be down below shortly changing the oil out and getting her back to full working order. We’ll see how it all pans out.”

Pieter Heerema (No Way Back)

“It is not too bad. I am finally in line with the others albeit a bit behind them, so I am on the way down to the Cape Verdes. I am happy with that. But I am looking at a big deficit which somehow I have to make good. I’ve just started to look at the Doldrums so I have no real idea about it. I am still two days from Cape Verde and so the Equator is a long way off. Maybe, hopefully, I will have some luck there. I feel better today but the last couple of days have been really bad with back pain. I have been really suffering hugely since the first night and am struggling to move around the boat. It is impossible to hoist the gennaker and therefore impossible to make good speed. That seems a lot better today so I am hopeful that I am on the mend. Generally, it is a nice sunny day, the wind is 17-20kts and it is very pleasant sailing. I’d like to have the gennaker up for really fast sailing but I can’t get it up in the physical condition I am in right now.” 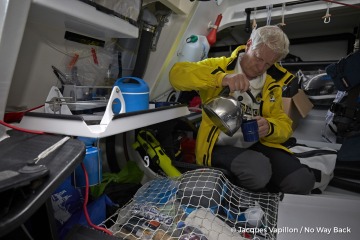 “This is a special day. Before I talk about sailing I want to talk of my absolute solidarity for the victims of what happened in Paris one year ago. I thought about them this morning in spite of being out here sailing on the ocean. All these kinds of actions follow us and it is a shadow on my day and our day. But there the sun is shining and the boat is going very, very well. I would like to sail further to the West but on my angle it is impossible to sail much deeper. This is absolutely the making gybe and so I don’t want to gybe as it would be completely negative. I’ll stay on this gybe then I will go to the Cape Verde Islands and see what happens. At the moment I cannot get down there. The wind is still changing all the time and so it is still hard to keep the optimum sail plan. That is all I can do. Everyone is a target for me in sailing, especially those around me, with whom I have a special relationship. Conrad is good and I would like to catch him. But the race is long. He is more to the West.” 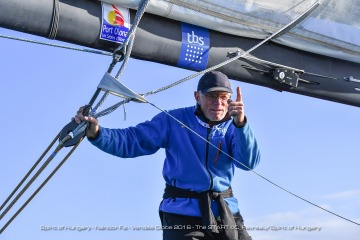 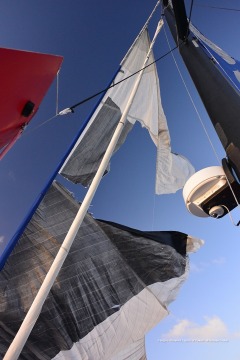 “Yesterday morning Koji was sailing well but suddenly he got a gust of about 30kts and broached. The rudder kicked up and he lost control of the boat. The A7 caught the water, and ripped apart. It is impossible to repair. We think it has already done two round the world races. We kind of hoped it would last for a third. We have a few new sails but what has happened is unexpected. He is still smiling.”