Home News Looking for a way out

Looking for a way out

While the pack in the middle of the fleet is well and truly stuck in the Doldrums, which are expanding off Sierre Leone, the leaders are making good headway south off the coast of Brazil. While the route seems clear for the frontrunners, those behind are changing their bearing, preparing for the weather to come off Cape Frio. While it looks like they will have to go around the Saint Helena high, there are some alternatives to get to the Roaring Forties…

Sébastien Destremau (TechnoFirst-faceOcean) saw four years ago on Virtual Regatta that the leaders were able to slide down the coast of Africa to take a short cut to the east of Sainte Helena along the coast of Angola and Namibia. The Portuguese discoverers tested this route in the 16th Century not wishing to lose sight of land. Afterwards, they would discover the hell of Cape Mojador and the stretch down to the Cape of Good Hope. But since the days of the East Indies trading vessels, the quickest route has been the arc of a circle between the Equator and the tip of South Africa, even if some skippers have tried this option and sometimes with success, like the Danes in the 1981 Whitbread Race, when they sailed for a fortnight upwind in the SE’ly trade winds, which blow up the African coast all the way to the Gulf of Guinea.

Currently sailing between Senegal and the Cape Verde Islands, the French skipper with his fixed keel IMOCA, appears to be hesitating whether or not to try this route, which would involve sailing 3600 miles to Cape Town rather than the 7000 miles via Cape Frio. However, the first option would involve tacking upwind in trade winds blowing at at least twenty knots… But, if we look at the longer term picture for the South Atlantic, this may be quicker, or turn into a wild goose chase. 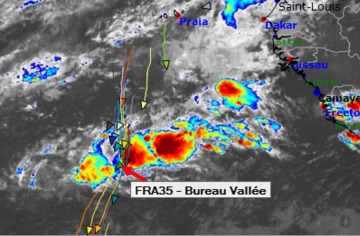 While the leaders are speeding along at an average of twenty knots (442 miles in 24h for the British skipper, Alex Thomson et 435 miles for Armel Le Cléac’h), that is unlikely to be the case when the bulk of the fleet gets here. Alex Thomson (Hugo Boss) followed 60 miles back by Armel Le Cléac’h (Banque Populaire VIII) is still diving down at 195° towards Cape Frio, while Vincent Riou (PRB), Sébastien Josse (Edmond de Rothschild) and Paul Meilhat (SMA) have turned due south. This slight difference in bearing, if it continues, will have a direct consequence on how they get to the low-pressure area coming out of the Bay of Rio de Janeiro. The two frontrunners are aiming for stronger winds (25-30 knots) from the NNE off Vittoria, while those chasing them know they can only attempt to hold onto the tail of the low with a twenty knot wind associated with a developing second Brazilian low.

At the speed at which the situation is changing in the South Atlantic, there won’t be a second chance this weekend. More than a day behind, the trio formed by Le Cam-Ruyant-Dick will find it hard to stay with them and it is even looking tricky for Yann Éliès (Quéguiner-Leucémie Espoir). For those behind this group, the trade winds are going on strike this weekend… By Sunday midday, the easterly air stream will be down to below ten knots at the latitude of Salvador da Bahia and there will hardly be any clear breeze for the coming week. The next express train towards South Africa isn’t expected until Friday off Cape Frio… The small crevasse we can currently see will open up into the Grand Canyon.

A hot and copper sky

“I don’t have a bath so I’ll take a dive in the Doldrums,” said Kito de Pavant . Indeed, when there is now wind at all, you might just as well do that in water at 28°C. Bastide Otio got away from the sub-equatorial mess last night, but as the Doldrums are expanding towards the south, most of the pack are stuck in fluctuating winds, occasional puffs of air, squalls and gusts. Enough to drive you mad. Especially when you can see the door shutting in front of you.

Louis Burton (Bureau Vallée) is not far from getting out of there along with Bertrand de Broc (MACSF), but the others behind have a long wait ahead of them with boats bunching up. There are now eleven boats within 250 miles of each other between Arnaud Boissières (La Mie Câline) and Pieter Heerema (No Way Back), trying to get away from the tentacles of “the big, black octopus”. Patience is required with the gap set to widen between the frontrunners and the pack…

Times to the Equator

From the Equator to the Doldrums