Of the pair, Ruyant was first past the milestone at 1827 UTC, setting a time from Les Sables d'Olonne of 23 days, six hours and 25 minutes. Le Cam followed soon after at 2223 UTC with a time of 23 days, 10 hours and 21 minutes. The duo were almost five and a half days off the record time set by the then race leader Alex Thomson on Hugo Boss of 17 days, 22 hours and 58 minutes. Tenth-placed Kito de Pavant still has some 500 nautical miles to sail to reach the Cape of Good Hope.

At 0500 UTC race leaders Armel Le Cléac'h and Alex Thomson were around 20 nautical miles directly north of the Kerguelen Islands in the south Indian Ocean, the gap between the pair reduced to just 15nm. Boat speeds across the fleet were up this morning with only two skippers – 14th-placed Fabrice Amadeo and Rich Wilson in 18th – making less than 10 knots.

The large group at the back of the fleet still mid South Atlantic were finally enjoying decent breeze after nearly two weeks of painfully light airs. Romain Attanasio said there had already been a marked change in conditions as he finally opens up the throttle on Famille Mary – Etamine du Lys. “The wind got up late in the day and I even took a reef in the mainsail,” he said this morning. “I now have 18 to 20 knots of wind, so it’s the end of the tunnel. It has been hot, but now I’m having to wrap up warm. I put my shoes on last night and took out a blanket. I shan’t be going too far south, as I don’t want to get the worst of the gales and I’m going to have to find a way around the St. Helena high to stay in winds that are easier to deal with.”

Bertrand de Broc, who on November 19 became the first casualty of the Vendee Globe when he was forced to retire with keel damage, was this morning heading north off the coast of Senegal en route to SW Brittany. 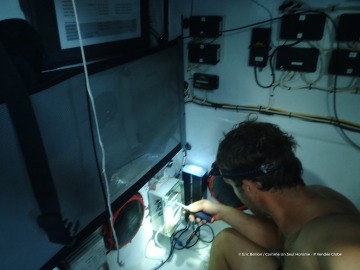 Éric Bellion (Commeunseulhomme): “I’m finally diving south downwind with decent speeds. That changes a lot. We really suffered in that high, sailing upwind on chaotic seas, where it wasn’t easy to find the way out to the Sothern Ocean. We should be surfing along downwind for quite some time. It’s an important step in the round the world race. I have been thinking about it with some trepidation for a while. After the taster, we’re now into the main course. The degrees of longitude should go steadily by.  After the Cape of Good Hope, in ten days, we’ll be halfway between African and Australia. We have just gone from the Tropics to the Southern summer and I’m going to have to get my warmer clothes on. We’re still grouped together, which is nice for the voyage in the Southern Ocean, as it is reassuring to have others around you and it encourages you too.” 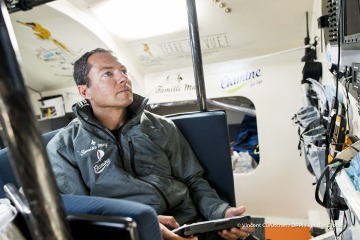 Romain Attanasio (Famille Mary-Étamine du Lys):”We’re finally moving again after a painful day yesterday. Cali (Arnaud Boissières) was windward of me and was moving, while I was stuck… It was horrible in a miserable area where the winds converged. At one point I had three knots from the north with the wind directly astern and I could see the others getting away. I had an upset stomach yesterday after eating some cheese that wasn’t very fresh, but it’s fine now.” 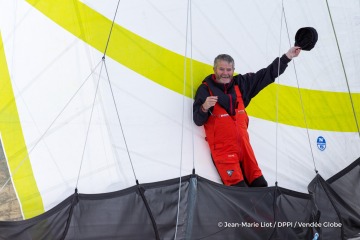 Enda O Coineen (Kilcullen Voyager Team Ireland): “Moving south east, we are not getting the 25 knots hoped for to slip us fast below the 'pack'. Being almost downwind, it is not good, since we need an angle of at least 135 degrees to keep speed at its optimum. This has pulled us more north than planned where the pressure is less. The big tactical decision now is when or if to gybe back down for a short-term loss and possible long term gain. Ideally to be done on a wind shift.”

Colman: all on from now on

Louis Burton, the leader of the pack