When you reach the summit of this wasteland, you have up to 4800 m of ice under your feet. This represents 90% of the world’s ice… and 70% of the fresh water. The ice weighs so much that it crushes the rocks to below sea level… The centre is around the South Pole, which is constantly swept by icy and violent winds, which can exceed 180 mph. During the southern summer (Jan, Feb, Mar), the temperatures vary from -25° to -50° C depending on the altitude. During the other nine months, the average temperature is – 70° C. A low of – 93.2° C was recorded in Aug 2010. In spite of that, there is life here with Emperor and Adelie penguins, Weddell seals and leopard seals, petrels, terns, fulmars and albatrosses, while Dominican gulls and cormorants breed here.

For man, this is a unique place for research. The American whale hunter John Davis came here in 1821 and the first scientists in 1837, including Frenchman, Jules Dumont d’Urville who called this land Adelie land during his second Antarctic expedition in 1840, in what is a French zone today. Since then, scientists and researchers have made it a real reserve dedicated to scientific research, where military and political claims are banned. This unique feature goes back to the Antarctic treaty of 1959 which was extended in 1991 by the Madrid Protocol, which added a clause about mineral extraction valid until 2041.

Thousands of scientists from around the world are able to do their research on neutral territory. This is the perfect place to observe the planets and study the ice… Ice is memory store going back 500,000 years. Biologists visit here to study the animals, which have adapted to life on the ice. A new species is threatening the life of these researchers and penguins: tourists. New rules will have to be established to protect the fragile Antarctic…

Even during the southern summer, when the sun never goes down, Antarctica is so cold that water is essentially present uniquely as ice, meaning there is very little rainfall over the majority of the continent (200 to 500 mm/year). The land extends outwards via the pack ice, which freezes at -2°C, along the 18,000 km shoreline. While during the summer, its surface covers more than 4 million square km, it can be five times that in winter.

Bits of ice break off to form icebergs and growlers, stretching out into the Weddell Sea (in the S. Atlantic) and the Ross Sea (S. Pacific). The Southern Ocean surrounds it to 60°S. This is in fact an extension of the Indian, Pacific and Atlantic, but in terms of oceanography, it is this region that feeds the oceans. That was what the Polar Pod expedition led by Jean-Louis Etienne tried to find out more about with a platform ballasted at a depth of 80m following the Antarctic currents to 38°S. The circulation turns clockwise offshore, while inland, it is in the opposite direction. This research should tell us more about the effects of global warming and the drifting of icebergs as they move away from the Southern Ocean.

Pieces of ice the same size as Corsica have been spotted moving towards the NE pushed along by the winds in the Furious Fifties, which is why the Vendée Globe Race Directors set up the exclusion zone, as icebergs were spotted at 40° S down under the Kerguelens in the Indian and around Gough Island in the Atlantic… But there appears to be less ice around Cape Horn and the Race Directors have shifted the exclusion zone limit further south. 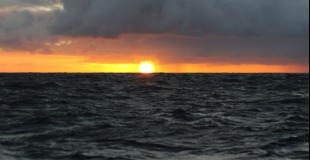