Since Cape Horn, the climbing up of the Atlantic Ocean has been peppered by different close to, along or thru islands passages. But, first thing first, the most famous cape is also an island. Passing it at the closest allows to discover this unique point, the American continent tip. A bit more in the North, the Falkland Islands are notorious because of the war between the Brits and the Argentines who wanted to get back these lands discovered by Amerigo Vespucci and that are lying 400 km off of the nearest coast. Just after Cape Horn when sailing Northbound, they block the way to the competitors and rounding them by the West or the East according to the weather conditions often prefigures what will follow towards the Equator. The little known Brazilian archipelago Trindade and Martin Vaz has been an obsessive fear for some of you. As a matter of fact, with an area of 0,3 km2, Martin Vaz was not visible on the game interface. One had to zoom in at maximum to see it appear and some of you had the very unpleasant surprise to get stranded onto it. Then come the Ascension and Saint Helena islands, which are located more in the centre of the Atlantic Ocean, but that some of you had the chance to pass by, whether by sailing downwards or upwards the ocean. Ascension Island is part of the British Overseas Territory as well as Tristan da Cunha and Saint Helena Island. This last one is famous because of Napoleon’s exile in 1815. But there was no exile for the virtual players, who only hoped not to remain stuck to long in its well-known High. In the Northern hemisphere, the Cape Verde archipelago, first islands that the sailors - coming from the South - will cross, is made of volcanic islands like many of their sisters; they are 8 islands and 10 islets. More in the North, the Canaries Islands, thru which many players have sailed while the descent or the climbing up, are made of 10 islands and the lee between them has often slowed down many of them.

Even more in the North, Madeira is a Portuguese archipelago made of several big islands and many islets. And finally, the Azores is also a Portuguese archipelago, thru which the Virtual Vendée Globe rivals are currently sailing. Famous for its High that is blocking the way towards les Sables, the Azores are an earthly paradise. All these islands constitute Macaronesia.

If the frontrunners have passed the Azores without any problem and are heading towards the Sables via the North, Istishia’s shift still seems a good option. Leading at 657 miles from the finish line, the gaps with its chasers are narrowing. The next two days may be tense for the leaders.

There is no change on the Atlantic Sprint. The eastward shift still favours TabarlyLeMaitre who keeps on his northbound route. In the next days however, the conditions may turn more favourable to the western gang. To be continued.

If you happen to pass by the VR news boat, do not hesitate to leave a message; this vessel is the link between the players and the editors. As we already have told, the huge success of the boat does not allow us to answer all your questions. As news go by, we’ll bring you some solutions, advises, answers,and all this kind of things… 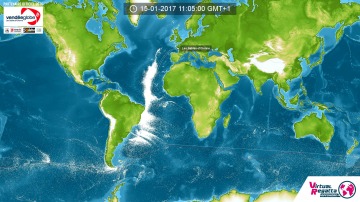