Home News Rich Wilson in his own words

The crowds were out again in Les Sables d'Olonne this Tuesday afternoon to welcome home Rich Wilson, who just completed his second Vendée Globe. He said that at the age of 66, it was very exhausting. The race will be remembered by him for being extremely grey, but he has some fine memories too of communicating with his fellow competitors.

"It’s great to be back. To see France and all the French people here. It was great to see Eric (Bellion) and Alan (Roura) here. They were my brothers in the south. We talked almost every day by e-mail.  In this race I think there was a lot more communication between the skippers than in 2008-2009 – Koji, Fabrice, Nandor, Stéphane and Didac who was chasing me. We talked about everything in the world. It was a little bit harder, because I’m older. The boat was easier because of the ballast tanks. You can use the ballast rather than put in a reef all the time, which is what I had to do on the other boat. What distinguished the race for me was that it was grey all the way. Across the south and then all the way up the Atlantic. Grey. Grey. It was so depressing. Four or five days ago, the sun came out for twenty minutes and I leapt out and stuck my face and hands under the sun. It was grey and just for so long. That was hard."

"I found all the calms that exist in the Atlantic. It was never-ending in the Atlantic. Eight years ago, I said never again. But now it’s too difficult. This is the perfect race course. The most stimulating event that exists. My goal was to finish this race and to work for SitesAlive, which has 700,000 young people following. What is fantastic about this race is the support of the public with all the people here. I remember the first time, someone said, if you finish the race, you’re a winner. I think that is correct. I could give you a quotation from Thomas Jefferson. When he was ambassador to France, he said everyone has two countries, their own and France and I think that is true." 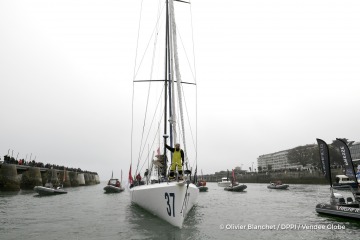 "The Vendée Globe is two Vendée Globes. It is very long. The oceans, the capes. It’s all very hard. But the other Vendée Globe is the one ashore. The welcome that our team and I have had here. It’s incredible. I felt older. I am 66! My thoughts go out to Nandor who finished two weeks ago at the age of 65. We sent back data each day concerning me and the boat. Each day, I did an average of 12,000 turns on the winch. But it was hard."

"The worst thing was it was so grey. I had a map of the stars with me but I couldn’t use it. The best thing was communicating with the others. We’re a real community."

“The boat was more powerful but with the ballast systems was more powerful. I made a record each day of the number of turns on the primary winch coffee grinder and on average it was 1200 revolutions. Sometimes that was 3000 that was very hard.”

“I am not sure I was so happy with my routing and my decisions, not in the South Atlantic going south or in the Atlantic coming back north. I seem to find every little bubble high that had no wind in it. In fact I made a video for the schools programme of the Adrena software output of the boat going around in circles. I am surprised that I have sailed so few miles. I did think along the way and in the Atlantic coming north. I thought about the other sailors and you can see the little boat icons on the screen of the other skippers and the number I could get, the speed, was never as good as other boats. I could not understand why the others were going so fast all the time. I do not understand how the sailors at the front of the fleet put up with the stress at the front of the fleet, because I am just scared all the time. All the time. I don’t know how they do it. The French skippers are so good. It is not just my little boat icon is not going as fast as Armel (Le Cléac’h) but it is not going as fast as Fabrice (Amedeo) and Arnaud (Boissières) and Eric (Bellion). They are so good it is incredible.” 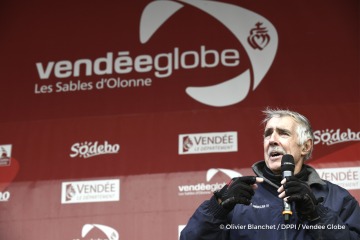 © OLIVIER BLANCHET / DPPI / Vendée Globe“I had to live with it. But it was frustrating because even the times that I was try to go past my conservatism – I just put the storm jib away last night – I would just be the same as those in my group. Perhaps it is not necessarily about my age but my generation thing because we grew up sailing heavy wooden boats. We won the Bermuda Race in 1980 and our average speed was 7.3kts. If you were going 7.4kts. So to have boats going more than 20kts is in some ways incomprehensible. When I got the boat from Dominique Wavre we were at dinner and he asked me if I wanted to know how fast the boat had gone. I said no because I did not want it as an objective and I did not want to be scared. But he wrote it on a piece of paper and it was 35.7kts. I said to myself if I ever see a three in the tens column I will be under the chart table and cry. One day we we had the Fractional Gennaker and one reef in the mainsail, the boat took off in 48kts of wind. The boat went under the water, it was a submarine. The next day I looked at the data and it was 31.2kts. I remember something Brian Thompson saying the highest speeds are always under autopilot because the autopilot is never scared.”

“Enjoyment in the context of the Vendée Globe must be in some other definition. You enjoy the satisfaction of making a good sail change. I think there is satisfaction. I enjoyed seeing the stars but that was very, very rare. It seemed like, well I talked on the VHF with a Brazilian warship when I was going south, I saw Eric Bellion when he went whooooosh past me. Then I saw a fishing boat off Cape Horn and then I did not see another ship until off Brazil. It was like the world was empty. That was strange.”

“It is hard. It is hard work. That part is difficult to describe. The sails are heavy. It is very physical. At home I have a trainer who is an All American Runner and a world champion cyclist and she worked me very, very hard but it was not enough for sailing these boats.” 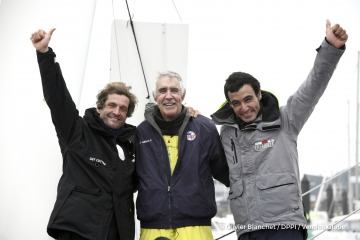 “Sometimes at sea whether it is fatigue, or frustration, when I when I was going around in circles and I was ready to tear my hair out or worse. The frustration leads to anger. You think the gods are against you. King Neptune is against you. Sometimes I tried to cry just to release the tension but it would not come. I could not. Until a few days ago Lauren Zike who is the web programme manager sent out a photo from a school in India of a class holding up their certificates for completing the programme and then I cried, I cried my eyes out at the chart table. That was exactly why I was doing this.”