With 16 boats now finished, the eighth edition of the Vendée Globe becomes the race with greatest ever number of finishers. Until now it was the 2000-2001 edition, with 24 starters and 15 finishers, which saw the biggest number of starters reach the end of their race at the legendary South Nouch buoy.
Two of this eighth edition's 29 starters are still racing at sea. 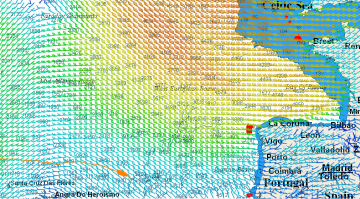 Having been initially expected to arrive Monday, Dutch skipper Pieter Heerema has been forced into what is effectively a 'holding pattern' at the latitude of Lisbon. A series of tough low pressure systems are set to bring big winds and seas to the Bay of Biscay from Sunday onwards. Monday, when he would have been finishing, if forecast to bring 40kts winds and eight to nine metre seas on Biscay. In the open ocean on the race track this would be considered difficult conditions, worth avoiding, but the risks are so much greater in the shelving waters closer to the shores around Les Sables d'Olonne. Hence the skipper who should become the first Dutch sailor to finish the solo non stop around the world race, has elected to remain at this safer latitude until a small window opens between two successive systems for a finish now expected to be Thursday or Friday.

Meantime Heerema is in a 15-20kts SW'ly breeze which will actually shift to the NW and ease. The front with 35kts in it wil cross north of him tomorrow reaching Les Sables d'Olonne in the afternoon.  Pieter Heerema is expected to have to stay at these latitudes until Tuesday when there appears to be a window of opportunity to make the race north to the finish line, to complete a Vendée Globe which has been full of challenges, mental and physical, for the Vendée Globe rookie who had limited preparation and sea time with his boat before the start.
For Sébastien Destremau (TechnoFirst faceOcean) this stage of a race which is already feeling too long, really is more like Groundhog Day, starboard tack close reaching, life on an angle and crashing into the waves. However he will see the breeze drop slightly today but in three days more will get into a high pressure ridge at the latitude of the Canaries.