At midday today, it will be forty days since Armel Le Cléac’h won the eighth Vendée Globe. Pieter Heerema and Sébastien Destremau are still at sea in the process of completing a very different challenge: they want to finish the round the world race. The Dutch skipper is expected to get underway again this morning after a halt of around twenty hours to let the stormy weather pass in front of him in the Bay of Biscay.

Pieter Heerema is currently at the latitude of Vigo, just over 200 miles off the coast of Spain and 180 miles SW of the Cape Finisterre traffic separation scheme. Just as yesterday lunchtime, he is 573 miles from the finish in Les Sables d’Olonne. Aboard his No Way Back, he has traced a Z on the water in order to keep moving and not get tossed around by the waves, while at the same time not making any progress northwards, because of one of the worst storms of the winter and some dangerous seas with 7-9 m waves. This morning the bow of No Way Back is once again pointing northwards and Heerema is likely to continue in that direction to round Cape Finisterre and tackle the final run to the finish, but may turn around again to wait a little while longer. It is expected that the Dutch skipper will get moving again sometime between 0900 and 1500hrs UTC today. 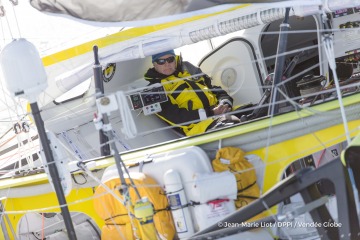 He is aiming to slip between two lows sweeping in to reach Les Sables d’Olonne on Thursday. He knows that today and tomorrow are not going to be easy with seas remaining heavy, but that the calmer conditions on Thursday are his best chance to complete the round the world race. So, he has another fifty hours or so to go and must avoid making any mistakes in the Bay of Biscay, which is not exactly welcoming for the returning sailor.

The opposite worry for Sébastien Destremau

Sailing conditions are certainly more pleasant for Sébastien Destremau. Too comfortable even. Around 1300 miles SW of Heerema, TechnoFirst-faceOcean is still in a moderate NE’ly trade wind, which is due to last another few hours before easing off because of another ridge of high pressure. For the moment Sébastien is still managing to make eight knots northwards and is already practically at the latitude of the Canaries, which are 830 miles to his starboard. Destremau is still in with a chance of not being slowed too much, if he avoids heading towards the NE too soon, where there is absolutely no wind 300 miles down from the Azores and with only very light airs between the Azores and Madeira. He is still due to finish a week after Pieter Heerema, in other words around Thursday 9th March.

One dealing with stormy conditions, while the other suffers in light airs... That is the difficulty today for the final two competitors in the eighth Vendée Globe.