The 2017 Rolex Fastnet Race got underway at 1010hrs UTC on Sunday off Cowes for the nine IMOCAs competing in the ocean racing classic. There was a strong line-up with the top five boats from the last Vendée Globe: Bureau Vallée 2 (Armel Le Cléac’h’s former Banque Populaire VIII), Hugo Boss, Initiatives-Cœur (Jérémie Beyou’s ex-Maître CoQ), StMichel-Virbac and Generali (Yann Eliès’s former Quéguiner-Leucémie Espoir). Malizia (Sébastien Josse’s former Edmond de Rothschild), Vivo a Beira and La Mie Câline-Artipôle also lined up. The first part of the race down the English Channel and up to the Irish coast to the Fastnet was very tactical, as it had to be sailed upwind, taking into account the currents, wind shifts, local conditions, and the light airs that were sometimes experienced.

The duo on SMA in control 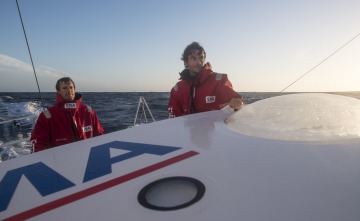 © Olivier Blanchet / SMALeading the way from the outset, Paul Meilhat and Gwénolé Gahinet extened the lead over their rivals. They took advantage of the conditions, which favoured the straight daggerboards and had a good lead over the others by the Fastnet Rock. The sail back down to Plymouth and the finish was downwind, but the leaders held on as the foilers gained on them. It was finally at 0224hrs UTC today that Meilhat and Gahinet crossed the finish. “We are really pleased, but also relieved to cross the line in this demanding race. The final stretch from the Scillies was complicated. There were squalls and we had to be ready at all times to trim to keep up the speed while avoiding getting knocked down,” explained Gwénolé Gahinet just after crossing the line as the winner on SMA. Paul Meilhat, who now really knows all about his IMOCA after taking part in the last Vendée Globe, knows that with Gwénolé Gahinet they have a lot going for them in the next Transat Jacques Vabre.

Two foilers take the remaining places on the podium 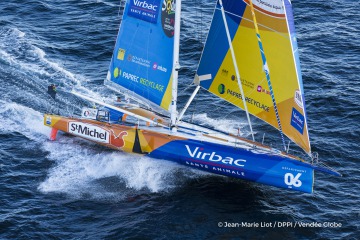 Behind them, there was a tough fight for the next two places. At the Fastnet Rock, it was the mixed doubles on Generali, (Isabelle Joschke and Pierre Brasseur) who were in second place ahead of StMichel-Virbac (Jean-Pierre Dick and Yann Eliès). Making the most of their foils and dealing well with the last stretch, the duo on StMichel-Virbac finally grabbed second place 75 minutes after the winners. Yann Eliès: “We fought hard on the way back down to Plymouth. The wind was up and down with strong, nasty squalls, so it wasn’t easy finding the right sails. We got a bit tired yesterday in those conditions, as it was physically demanding. The wind stabilised during the night and so we managed to be relatively quick. We even caught the Volvo Ocean Race boats a few hours before the finish.” Yann Eliès and Jean-Pierre Dick will also be a pair to watch in the Transat Jacques Vabre. “The pairing is starting to take shape. We now know Yann a bit better and there were a lot of positive things. There is a list of improvements, so we are going to have to work hard,” declared Jean-Pierre Dick.
In seventh position at the Fastnet Rock, Boris Herrmann and Pierre Casiraghi made their comeback in the final stretch on Malizia, overtaking four boats and finishing third. On Initiatives-Cœur, Tanguy de Lamotte and Sam Davies had to make do with fourth place ahead of Generali, Bureau Vallée 2 and Vivo A Beira. The locals, Alex Thomson and Nicholas O’Leary took eighth place, while Arnaud Boissières and Manuel Cousin (La Mie Câline – Artipôle) brought up the rear. 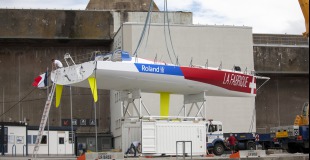 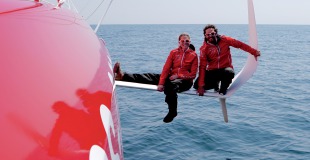 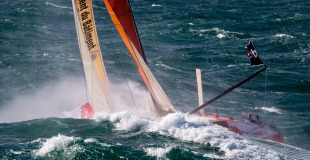 12 duos in the transatlantic race