With each passing edition, crowds gather for the start of the Vendée Globe. For all those fans of adventure, sport or ocean racing, there are always lasting memories of those enjoyable and emotional hours spent watching their heroes in the bitter cold. Part of the magic of the Vendée Globe that people love to talk about comes from those moments, so we are going to look at a few of those memorable times.
Sophie cannot remember which year it was, but she remembers what everyone was wearing at the time. “We were in the Cabaude bar in the inner harbour with the rain beating down unexpectedly. Some people were well prepared with rolls of bin bags which we used to protect ourselves.” Ah, yes, the November rain… the sort of rain that forces you to shelter under the spinnaker or whatever else comes to hand. Quentin was decked out in orange. With his clothing and because of where he was standing, he found himself in the legendary photo.

ALL YOU NEED
A great banner, wasn’t it? It was made by a family group of cousins, brothers and sisters, children and grandchildren, who were mad about the Vendée Globe. They have not missed a start since 1992, and for each edition, they have decided to make a banner to attract attention and appear in the photos. The fact that these passionate locals were descendants of Henri-Marc Benoist, a naval surgeon, who set sail for the New World in 1777 along with Lafayette (Gilbert du Motier, marquis de La Fayette), helps explain their fascination for seafarers. While Didier Lefèvre cannot remember the first two slogans the family displayed in the harbour entrance, he does remember those that followed. In 2004, the family’s banner declared “Thank you, Jeantot.” “We should not forget that he was the founder of the Vendée Globe,” explained the professional photographer, who now lives in Finistère and is an active member of the family group. Practically all of the skippers loved our banner that year.” Another proclaimed their support for Vincent Riou and his sailing club of Loctudy: “Vincent, the CNL supports you!”

In 2008, the famous “Yes U can” adapted Barack Obama’s campaign slogan. In 2012, the question was “Whose turn is it?” and in 2016, “#All YOU NEED IS GLOBE” entered the history books. How do they do it? A few months before the start, the whole family gets together, talks it over, rejects ideas and then votes and the decision is made. “#All YOU NEED IS GLOBE was seen as far away as Thailand,” exclaimed the photographer. “The aim is to surprise the skippers and communicate with them.” 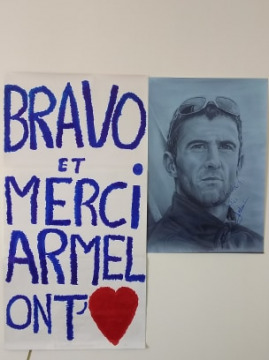 They then have to get the best place possible on the harbour wall. This is something that many families and groups attempt to do during the night. So, they get up at 3 in the morning and stock up with coffee and hot chocolate. Michelle and Gérard have it all planned and everything runs smoothly. They live thirty miles or so from Les Sables d’Olonne, but the roads to the harbour entrance channel close at midnight. That does not matter for the fans of Armel Le Cléac’h who sleep nearby in their car, as they wait to take up their place on the harbour wall at around four in the morning.

LOVE
Of course sometimes love comes to town in Les Sables d'Olonne at Vendée Globe time. Nicolas had experienced two starts before he decided to take the love of his life in the on the water to experience it up close and personal. On the day it maybe ended up being more of a penance than a pleasure as she was sick as a dog. But clearly it helped strengthen their relationship as today they are marrried.
Charline left her Haute-Savoie home to bring Swiss chocolate to Marc Thiercelin in 2008. She was inspired by the French weekend TV show Thé ou Café. Meanwhile Gisèle is still having fun at the joke she made to her husband in 2012, when the start was November 10.
A few days before the start her husband asked: "When do they leave,"
"10/11/12," she replied.
"So they leave on three days? " he asked....
They were all there in different years at different spots on the Channel and in the town in the chill of the very early morning. Alexandra recalls heading to get a spot on the channel with her daughter Nolwenn, whose dream came true when they met Sam Davies and shared a few moments with the British skipper.

Others share their little anecdotes. In 1989, Christophe saved the day for Loïck Peyron who had forgotten to take any bed sheets on to his boat. Head of reception at the hotel where the young Peyron helped him out. The sheets from the Mercure Thalasso des Sables hotel have therefore sailed round world. Caro was also always up and out early as her father worked in the harbor master's office and the phone calls from the returning skippers in the night woke up the whole household. But as it was for a good reason.
François was particularly spoiled. In 1998 he won the chance to sail on Aquitaine Innovation with Yves Parlier. Two years later, of course he was in the channel to cheer on his hero when Parlier returned from his epic race, fashioning a jury rig on a New Zealand island after dismasting . Since then François has never missed a start.
Finally, there are those whose actions or initiatives add to everyone's pleasure, such as the volunteers from Sodebo who offer hot early morning coffee by the harbor. 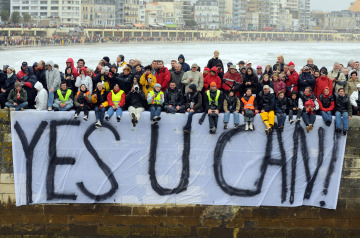 EMOTION
And Clément who sang was an 11-year-old schoolkid in Les Sables-d'Olonne in 2000. He joined the "1001 voices" choir set up by singing teacher Michel Nys from René-Guy Cadou school. Dressed in yellow and red windbreakers, the 1,001 children. They were singing "Around the Globe" at the top of their voices when Dame Elle MacArthur walked past and was overvome by emotion.  And that is the same, universal, unique emotion which suffuses the likes of Catherine Chabaud, Marc Thiercelin and all the others and which resides in the tens of thousands of hearts of those who remain ashore awaiting the return of the Vendée Globe sailors. And there are many thousands of fans who share the emotion and passion from their homes all around the world. Dale from Canada writes to tell us he is a big fan of two skippers, bilingual Sebastien Destremau - who holds dual French and Australian passports - who he communicated with during the last race. And he is a big, big fan of Alex Thomson whose Hugo Boss graphics were clearly a big infuence on those on his Islander 36 which he sails from Vancouver.. 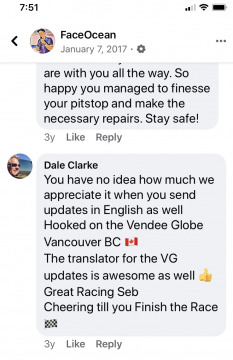 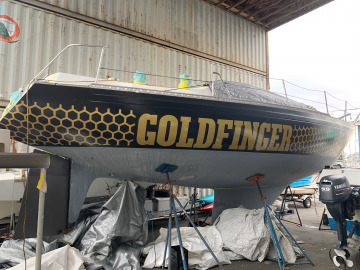