After finishing second in the Vendée-Arctique-Les Sables d'Olonne race Charlie Dalin pulled no punches when he described the challenges of trying to live and to operate to the maximum on board his foiler APIVIA. Sleeping, eating and simply living is never easy and almost always uncomfortable on all of the latest generation foilers.

Comfort is not really a word you can realistically apply to life on board, you have to get used to the banging and crashing in the long run.
"My boat is certainly not for those who are disposed to seasickness. It's completely enclosed. When you see 20 knots of wind up on deck then you know it's going to be a battle. Really, a lot of the time you just sit where  you can,  but  the problem is there is a lot of shock movement through the boat and so when you are wedged or jammed somewhere then very quickly your back starts to hurt. Resting on your feet where your legs can absorb some of the shocks is usually best. And for sure when you are going very fast lying down can be the most comfortable. Even moving down to leeward to see my genoa, for example, I take it slowly and go a very carefully selected route. The problem with standing is you have to be holding on or supported all the time because you just don’t know when then shocks are coming. This is not like a classic boat where you can see the sea coming to you and predict the movement of the boat. Here, you just never know. You have no idea. Sometimes you have a big bang. You need to be in the best physical condition possible to allow you to sustain this.”

Boats evolving faster than their skippers.
" For the Vendée Globe we will be adding more protections. There is a main handrail and we will use foams on the right and left of it. But it is becoming a real challenge, to keep up the speeds over time for as long as possible. The performance gains take a toll on the skipper in terms of comfort. But if you go faster, it's definitely worth it!  In fact every time the Vendée Globe starts we are saying the same thing: “We can't go any faster”. But the boats advance in performance by percentages with each generation but the skipper does not evolve ! So you have to adapt the ergonomics to keep up with the boats."

Eat with great care. When stacking wear a helmet.
" When it comes to preparing food  I have to be very careful about the way I pour the hot water on my freeze-dried. You watch out for every move. I put myself in a position to limit the action of the blows. You often end up high on your knees doing stuff. I have a rugby helmet to go to the front of the boat (inside) so I can hit my head on the structure without hurting myself." 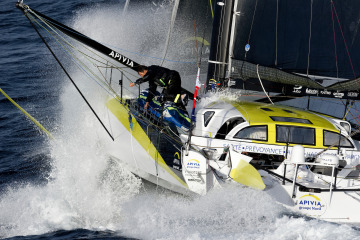 © François Van Malleghem / ImocaGetting wet. From the outside in and the inside out.
"Move out on to the the deck ? Well that really does depend on the situation! Downwind, you have to forget going outside. The boat takes huge swathes of water over the deck. When you are reaching there are small waves and you don’t get so drenched. During the Vendée-Arctic- Les Sables d´Olonne, I tested some ideas, like pressing on before I had really finished a maneuver. You waste less time (maybe making a gain of 3 or 4 miles) but you get thoroughly done over.  You come in from there slammed, totally soaked, because everything goes through your foul weather gear and, besides, inside it you are sweating so much anyways. And so there you are, you set your level here too, how much you push to make gains through a manœuvre. Sure, we spend a lot of time inside but that is the game now, you don’t stick your head out a plane window ! It is the same on our boats now."

Sleep Doesn’t Come Easily At All.
" I don’t know the answers when it comes to sleeping. I have tried many things. This is a real strategy for us because it will make a difference. We invested a lot of time and money in this. W will continue to work on this during the summer. I work with the European Sleep Center and in particular with Dr. François Duforez, a specialist. He worked previously with Jean-Pierre Dick, but also with football teams, Formula 1 and with the army. If the question is about how to get meaningful sleep in a hostile and tough environment: he knows some of the answers !
During the Vendée-Arctique-Les Sables d´Olonne, especially during the second depression, I am happy to have managed to sleep at high speeds. I really wanted to find out of if I could do it and I managed, despite the stress of being at speed and the boat slamming hard. I have learned techniques to relax my muscles one by one. I know that during the Vendée Globe we'll be so tired that after a while we'll be able to switch off and sleep. The hardest bit is getting naps are at the start of races, because usually you are in overdrive all the time to stay with the top group from the first few days. In the Vendée-Arctique, I took naps of 40 minutes maximum, which is really not a lot. That is not enough, it is not sustainable like that.
I also need to make further changes to my nutrition. In the Vendée-Arctique Les Sables d´Olonne, I ate a lot and I was hungry all the time. I eat rich calorific food but keep it well balanced, because it takes a lot of energy to be able to make all this efforts. Sleep and nutrition. It is so important for me to cover all the bases, to take all possible performance parameters into account. I'm not the type to find a dead end.  It’s a question of having that no stone unturned philosophy. It's part of the whole performance package. The Vendée-Arctic was a very important experience in terms of the learning the pace to be set on board. I realized I was over-revving all the time and getting tired. I tell myself that in the Vendée Globe, it will be a battle that lasts three months and you cannot live like that."

The Noise. Always On.
" As for the noise level, I measured 85 decibels, with peaks at 92. This is another part of the whole discomfort. There are often noises associated with the speed of the boat which just ratchet up the stress. You are always aware that every noise corresponds to something. When sailing of course you use all of your senses, you are on high alert all the time and your hearing is very important. The noises are constantly engaging you. As most of the time you can't see anything because your boat is covered with water, your active senses become touch and sound, what noises you hear and you interpret them. Even though there are cameras everywhere that let you see the outside on your computer screen, hearing is still essential. You can’t ignore anything. Right away you have to find out where it comes from: it might be saving you from an imminent disaster. You hear something but until you process what it is, you are on edge" 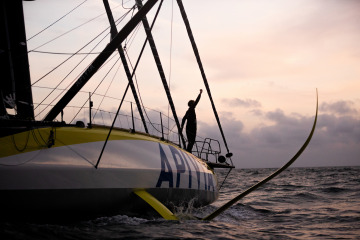 Routing for flatter sea rather than the strong wind
"We are so governed by sea state and performance deteriorates quickly, depending on whether there are big waves and swell or not. It's not like in the Figaro where the more wind you have, the happier you are. From 13/14 knots of wind speed upwards we are flying. But just because you have 30 knots of wind that doesn't mean you are going faster. Better to opt for flatter sea than stronger wind. On flat seas, your boat doesn’t slow down. What interests me more than anything is the ability to stay ahead of a front. I can't wait to experience this in the big south. Can you imagine keeping a speed of 25 knots non-stop without ever stopping! That’s my dream to move with a depression and to cross a whole ocean like that. We now have boats that have the capacity to do just that! "