Jean Pierre Dick gave up eight hours of hard earned miles last night after he unknowingly slipped south into the Antarctic Exclusion Zone yesterday evening, the prohibited area which is defined by race direction to reduce the risk of Vendée Globe skippers encountering drifting ice. It appears that the skipper of StMichel-Virbac had not updated the position of the ‘ice wall’ following an update several days ago, required because of ice floating around the Kerguelen Islands.

Dick sailed in the exclusion zone for two hours before he made an ‘about turn’ and retraced a reciprocal course to the point where he entered the forbidden zone. In line with the race rules he was given the opportunity to do this by the race committee. However Dick has lost ground to the pair chasing him, as Thomas Ruyant (Le Souffle du Nord pour le projet Imagine) and Jean Le Cam (Finistère Mer Vent) are now only respectively 200 and 100 miles behind him.

Three hundred miles ahead of this group, Yann Eliès was forced to slow down and let an area of low pressure pass ahead of him. The skipper of Quéguiner-Leucémie Espoir lost more than a hundred miles because of his enforced delay. Eliès is expected to wait until the middle of the day for the worst of the weather to go by with SW’ly winds in excess of 40 knots forecast.

At the front of the fleet Alex Thomson made a nine gybe slalom along the ice wall yesterday over the course of 12 hours – between 0500hrs and 1700hrs before converging with his long time pace making rival Armel Le Cléac’h. The Hugo Boss skipper was clinging to a lead of less than four miles in terms of distance to the next waypoint earlier this morning, the two IMOCAs were just one and a half miles apart at some points both making around 15kts in 15-20kts of breeze on Thomson’s unflavoured port gybe. They are some 800 miles west of the longitude of Cape Leeuwin and about six days ahead of François Gabart’s 2012-13 record pace.

At the back of the fleet, in the sub-tropical waters of the Atlantic, Didac Costa (One Planet-One Ocean) and Sébastien Destremau (TechnoFirst-faceOcean) are still struggling in a high pressure system, while the pack is fighting hard in a front with westerly winds in excess of 35 knots. There are now some huge differences in the conditions being experienced by the skippers in the fleet, which stretches out for more than 5100 miles. 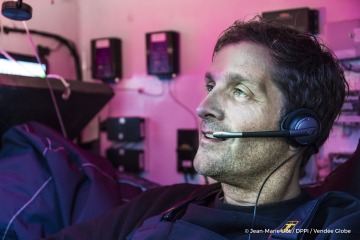 Éric Bellion (Commeunseulhomme): “We’re getting more and more wind. A steady thirty knot westerly. It’s the first time I have had so much wind on this boat. I’m learning as I’m going along. This is really the Southern Ocean. I saw my first albatross and a whale came by blowing within ten metres of the boat. This is a different world. I have already rounded the Cape of Good Hope with a crew, but sailing alone is not the same. It’s an adventure every day.” 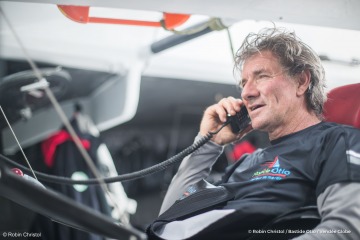 Message from Kito de Pavant (Bastide Otio): “Conditions are quiet. The quietest I have had since the start The albatrosses are getting closer and closer to Bastide Otio, except when I want to take pictures or film them. I have a busy day ahead of me: weather / strategy / make some water / a video link-up with the Eiffel Tower and the Paris Boat Show with the Occitanie Region. And then I almost forgot, there’s a storm moving in tonight and that is going to last for at least three days... A strengthening 35 knot NW’ly wind with 45 knots when the front goes over tonight, then a 35-knot WSW’ly all the way to the Kerguelens. The sailor and his boat are ready!”