One month since Vendée Globe solo round the world race started in Les Sables d’Olonne on Sunday 6th November the majority of the 24 boat fleet spans some 4000 miles. As leaders Armel Le Cléac’h and Briton Alex Thomson – 39 miles apart this afternoon – close towards the longitude of Cape Leeuwin 220 miles away from them on the south west corner of Australia, a posse of nine skippers are approaching or have just passed the line of the Cape of Good Hope. The southern oceans are exacting a toll.

The Vendée Globe dream of popular Japanese skipper Kojiro Shiraishi is over for this edition. After the top third of the mast of his Spirit of Yukoh fractured around 0230hrs early this morning, breaking just above the second spreaders, Shiraishi made the tough decision to abandon. He is the fifth skipper of the 29 solo sailors who started in Les Sables d’Olonne to abandon the course because of damage.

Ironically Shiraishi appeared to have just weathered the worst weather of his race. During Saturday he had reported safe passage through 40-50kts winds with six metre waves. But when the mast top snapped he reported that the wind had dropped back to just 20 or so knots. He was inside the boat and heard a loud crack. He is heading to Cape Town which was about 305 miles to his NNW when the breakage happened. The first skipper from Asia to compete in the Vendée Globe, competing in memory of his late friend and mentor Yukoh Tada, received a large number of messages of solidarity from fellow skippers. “Your Spirit and the Spirit of Yukoh will carry on with me. I will keep taking it for you. My thoughts are with you and you are with me in spirit. Yukoh is with me and I think a lot about you. Keep the spirit up,” offered Hungarian skipper Nandor Fa from Spirit of Hungary. He was only 17 miles from Spirit of Yukoh and had been racing closely with Shiraishi. The two skippers were firm and long time friends after meeting in 1994-1995 during the Around Alone race, and Fa knew Yukoh from competing in the preceding race.

But damage caused in the strong winds and seas generated by three different low pressure systems has been a recurring theme on this fifth Sunday of racing. Failure of the halyard hook on the mainsail mast track has affected both Jérémie Beyou on Maître CoQ in seventh place and also Arnaud Boissières on La Mie Câline 2200 miles further back in 14th place. Beyou had sailed north east without his mainsail towards the more sheltered waters of Amsterdam Island and had slowed to three knots late this afternoon.Arnaud Boissières was making 13kts and appeared to have solved most of his problems.

Fa, who became the 12th skipper to pass the longitude of the Cape of Good Hope at 1219hrs TU this afternoon, confirmed he had to cut his personal favourite A7 gennaker free after it split in half in a big gust yesterday. “After my autopilot turned off by itself for the second time, my boat gybed with the mainsail and the A7 gennaker. I stopped the boat to repair the autopilot. The cable was so corroded I couldn’t even unplug, I had to cut it. I cleaned the cables, and reconnected them. Everything went all right until the morning. I just went outside when the wind increased. An enormous wave and a big gust came at the same time. Then I heard a loud crack and the A7 sail was torn in half with one quick motion. I had no other choice, I had to cut it off and let it go. Unfortunately it took one of the halyards too, I couldn’t save it.”

His former co-skipper Conrad Colman (Foresight Natural Energy) has also been ‘in the wars’, knocked flat. “An electric bypass destroyed one of the solar charge controllers and it damaged the electric cables next to it. It stopped the electronics and thus the pilot, and I lost control of the boat as I wasn't at the helm. By the time I got there the boat was on its side and the gennaker in the water. It took me a lot of time to regain control and then to try to save the sail.” 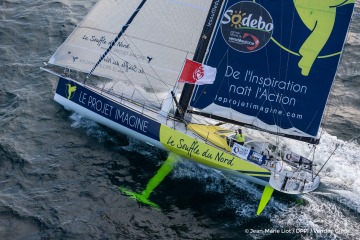 Thomas Ruyant, the French Vendée Globe rookie in ninth place, reported that he had been to hell and back replacing broken battens in his mainsail on Le Souffle du Nord pour le projet Imagine and sounded desperately tired when he spoke to Vendée Globe LIVE. And since breaking into the Indian Ocean for the first time, Louis Burton has not had to look far for problems on his Bureau Vallée. “Since the Cape of Good Hope, I have had a series of problems,” Burton reported, “There was a problem with the autopilot. I got knocked down three times. So as a result, I am very tired. I don’t know if it’s a problem with the compass or wind instruments at the top of the mast. The autopilot pushed the helm over several times during the night, but I don’t know why. With all the equipment stacked, when the boat comes right around, it’s on the wrong side. I have a tear in the J3 and a little one in the J2. Some diesel got spilled inside too.”

Even Alex Thomson cannot quite believe the pace at which the race is unfolding at the front of the fleet. The Hugo Boss skipper says he is trying as much as possible to sail his own race and not concern himself about periods of relative strengths and weaknesses compared to leader Le Cléac’h. On Vendée Globe live today Thomson said: “It is unbelievable that in five days or something like that we will be half way through the race. That seems incredible. It has been amazingly fast. I am pleased about that. I am pretty tired. It has been very gusty, very windy. It is damp inside the boat and really not great living conditions. Apart from that I am well fed. But I am looking forwards to the next front which will bring northerlies, the nice stable warmer air and I will be able to rest. It is virtually impossible for me to pace myself with Armel because on the one side I am significantly slower than him and so I am trying not to. I am trying to sail my own game and not worry too much about Armel. He has got different speeds to me and is likely to go different ways and so I am trying to play my own game. I think if I try to pace him I will probably push the boat too hard.”

Alex Thomson (GBR) Hugo Boss: “It has been a difficult night, very windy, not really good for going fast because of the sea conditions. So I had to throttle back a fair bit, to try and keep calm and concentrate on not breaking anything. It is unbelievable that in five days or something like that we will be half way through the race. That seems incredible. It has been amazingly fast. On my first Vendée Globe I was only south of Africa after 30 days. This time after thirty days I might be south of New Zealand. It is incredible.”

Enda O'Coineen (Kilcullen Voyager Team Ireland): “I am especially saddened to learn of the withdrawal of Kojiro from the race and, with deep upset from a personal perspective. We were first introduced in an Irish pub in Tokyo eight years ago and built a friendship. We had kept in contact and our friendship deepened through the build-up to the Vendee. Also the Japanese Team has a special Irish Interest in that in the background it was superbly managed by Tony O'Connor. It was through Tony's language and business skills that the projet became possible and the team qualified. As not being a French team or European, it was an added achievement in getting to the start line for Kojiro. And, such is the nature of this weird and wonderful event, encompassing every aspect of humanity, we never know what’s going to happen next as skippers live on the edge 24 hours a day and, as Winston Churchill famously said "If you're living on the edge you're taking up too much space". At least there is some consolidation for Kojiro in that it’s Summer in Capetown and they have good golf since he is a passionate golfer.” 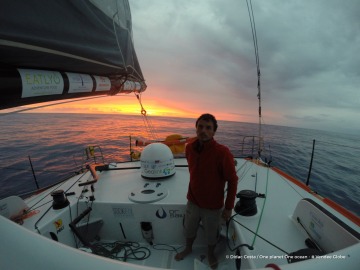 Didac Costa (One Planet One Ocean): “Sunday began with a fright. The wind had come back early in the morning and I was making a good progress again, with a good course at 10 knots of speed. I was at the nav desk and I suddenly heard a bang. I went out quickly and saw what appeared to be a rather large plastic structure in the wake of the boat. The remains of ropes were left wrapped around the rudder and hydro-generator. I have checked the keel and there is no damage; and it seems that there is nothing serious in the hull, although it is not easy to see. These last few days have been quite frustrating in terms of wind. I have been almost stopped with a strong SW ground swell that gives the measure of the strength of the storms that are a little further south. Let's see if I can start surfing the waves soon. The tail of another front is approaching us now and the wind will progressively shift from NW to SW. We will have to gybe at the right moment and then position ourselves for the arrival of the first serious front in two or three days.”

Jean Le Cam, Finistère Mer Vent: “I have never seen such big gaps. They’re huge! We knew that it would happen before the start, but not to that extent! From the first day, the frontrunners got away while we were stuck in light airs doing two knots. The richest get richer. I’m in eighth place. It’s funny. Well, not exactly funny… I am more than 2000 miles back from the leader.”

Kojiro Shiraishi on Spirit of Yukoh forced to retire