Rescue plan for stricken de Pavant is in operation

French skipper Kito de Pavant was enduring an anxious wait this afternoon aboard his Bastide Otio after he struck an object which destroyed his keel housing, ripped off his aft keel mountings and left the appendage supported only by the hydraulic keel ram.

De Pavant, from the Occitanie region in SW France is placed  10th in the Vendée Globe round the world race some 120 miles to the north of the Crozet Islands. He reported a significant ingress of water, flooding the engine compartment. Race Direction have been working closely with the MRCC authorities at Gris Nez to organise a rescue. The MRCC have been in contact with the Marion Dufresne, the 120m long research and supply vessel of the TAAF (Terres australes et antarctiques françaises) which supplies the remote French archipelagos of Crozet, the Kerguelen, Saint Paul and Amsterdam islands. The Marion Dufresne was reported to be around 110 nautical miles away and had an ETA in the area during the early part of this evening with a plan to evacuate the skipper by rigid inflatable boat when daylight occurs around 0200hrs UTC. 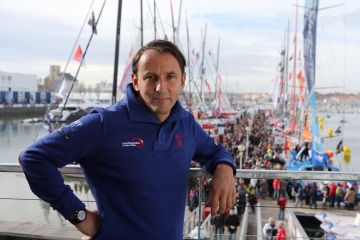 Alain Gautier, the Vendée Globe Safety Director, explained: “We’re hoping they will arrive at around 1700 UTC, but by then it will be dark there, so iti is down to the commanding officer of the ship to decide what sort of operation to carry out. They are likely to want to wait until day breaks at around 0100 UTC to launch a RIB to recover Kito. It will all depend on the conditions. We can imagine that the Marion Dufresne will position herself windward of Kito to try to calm down the seas. But she’s not that big a boat, so we don’t know if that will be enough to ensure a safe operation.  Sunrise is at around 0130 UTC, but they may wait a while for the weather to ease. Already the winds will not be as strong during the night. Our goal is to get Kito aboard the Marion Dufresne. It will be up to Kito’s team to deal with the boat, but that’s not going to be easy in that zone. Meanwhile he has called us when he finds the time. After the shock this morning and the obvious disappointment, we can see that he is more in control of the situation now.”

De Pavant, 55 years old had battled through more than 48 hours of strong winds and big seas and was racing with a double reefed main making around 16kts in 40kts of wind and 4-6m seas. The popular skipper has been forced to retire from two previous Vendée Globe races, in 2008-9 when he was dismasted 18 hours after the start and in 2012-13 when he retired into Cascais after a collision with a trawler. In the previous editions, de Pavant’s target was to win the Vendée Globe or at least to finish on the podium but prior to the start of this race he had stated several times that his primary objective this time was to achieve a finish. He had been sailing a mature, solid race since the start, taking no risks. “He had been sailing intelligently so far and this was his third Vendée Globe, so he really deserved a finish,” a shocked Yann Eliès told the Vendée LIVE programme when the news was broken live to the French skipper, who is in sixth place, and who himself had to be helicopter rescued after sustaining a fractured leg in December 2008 when south of Australia. 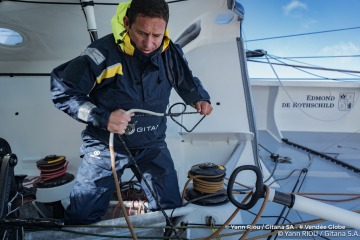 Sébastien Josse has been making steady progress in third place, back in race mode after a difficult 24 hours since he sustained damage to the port foil of his Edmond de Rothschild. Josse is reported to have secured the foil in its housing and was sailing at 10-13kts during this afternoon heading northwards. Critically Josse did not have to enter the Antarctic Exclusion Zone to escape the worst of the low pressure system, and by this afternoon the winds and seas had abated to more manageable proportions.

The group of four which are chasing behind the podium skippers, Paul Meilhat (SMA), Jéremie Beyou (Maitre CoQ), Yann Eliès (Quéguiner-Leucemie Espoir) and Jean Pierre Dick (StMichel Virbac) have made the best of the strong winds. Dick, in seventh, has closed to less than 170 miles behind Eliès and made more than 200 miles back on the leaders. Eliès is cutting back miles on Beyou and rookie Meilhat continues to sail a race which belies his relative inexperience in the Southern Ocean and is less than a day behind Josse now.

After 30 days of racing leader Armel Le Cléach (Banque Populaire VIII) has somewhere around 500 miles – or less than one and a half days of racing – to reach the half way point of the theoretical course distance of 24,500 miles. He leads Alex Thomson (Hugo Boss) by 90 miles this evening. 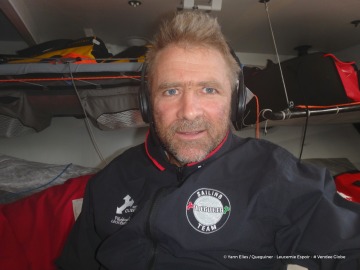 Yann Eliès (Quéguiner-Leucémie Espoir): “I’m very disappointed for Kito, who had had a  great race until now. I’ll feel reassured when I hear he’s been rescued. It’s lucky that he’s not too far from the Kerguelens. Down here there’s a lot to be feared... The situation can quickly become dramatic. The Indian is taking a fair share of the fleet. It’s a nasty, tricky ocean, which is living up to its reputation.” 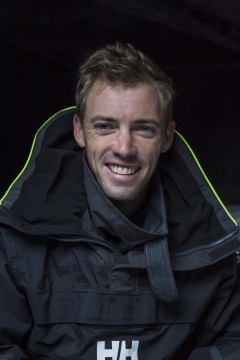 © Pierre BOURAS - Le Souffle du NordThomas Ruyant (Le Souffle du Nord pour le Projet Imagine):  “It’s fairly stressful to sail these boats at thirty knots. When the boat accelerates, you really have to hold on. I go outside occasionally to check the trimming, when the wind changes. We don’t have much sail up, so it’s not as hard to manage. Once the trimming is done, you stay inside and wait for it to go over. We don’t get many breaks and what there are, are short. It looks like we’ll be having this tough phase for several days. We just have to grin and bear it. It takes time, but you start to get used to these conditions. I broke four battens in the mainsail a few days ago. I managed to sort it out. The wind is set to strengthen again later today or this evening. I’ll be taking a very different route from the two boats ahead of me (Jean-Pierre Dick and Jean Le Cam, editor’s note).” 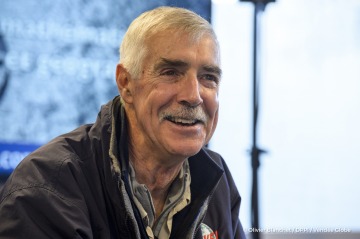 Rich Wilson (USA) Great American 4: “I have had quite a workout for the last 24-36 hours. These boats are big and there have been a lot of sail changes and there are some bigger depressions coming along now. One of the things about this boat compared with the 2008 boat is that this one is more powerful. I must learn what sail combinations which work for the boat in the stronger winds and which are within my capabilities. I am not able to push the boat as hard as the other skippers it would seem. I am getting some good sleep now after these sail changes which are so much exercise. I am eating well and have not been thrown around the cabin too much, but it is a real physical effort.”

The Indian Ocean living up to its reputation