No respite for Didac Costa

Catalan sailor Didac Costa is in nineteenth place 6940 miles from the leader Currently less than ten miles behind Pieter Heerema in terms of distance to the finish, he is approaching the longitude of Cape Leeuwin. Conditions have not been simple, as he explains in his message today.

Another windy night, I've almost lost count of how many... Before dawn a squall brought 47 knots of wind. Everything holds for now, but with such a sea state and wind I sometimes have the feeling that something will eventually burst. Anything on board, the simplest thing such as moving around or eating is complicated. It is also difficult to rest. I do not regret having lost nm a few days ago, diverting a little to the north, the sea is mountainous and I do not want 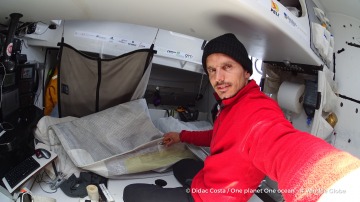 to imagine how it would have been closer to the center of the low ...  I have doubts about my strategy in the next few hours: go further south and find more wind, but with the lack of the blast reacher and so having to use the J2 (Solent) and continue adding hours of use to it; or gain some north and with a lighter wind to hoist a a bigger sail: the FR0. We will see...Although there are still days to go, the GRIB models predict a squall that will develop more or less deep where One Planet One Ocean should be on the 27th and 28th. I will have to keep an eye on it.

Le Cléac’h at the Horn, Thomson in the cooler