Home News The pull of home

The pull of home

For the seven Vendée Globe skippers racing now in the Northern Hemisphere, the draw of home, of being across the finish line back on solid, dry land, among friends and family grows stronger with every mile sailed. It is a powerful motivation, not least relishing that ultimate release of stress and tension which is unloaded by the sound of the finish gun. But the soloists know that prudence and patience cannot be compromised by the overpowering desire to be done.

Less than 650 miles from the finish line in Les Sables d’Olonne, Nandor Fa still had 35-40kts westerly winds. The skipper of Spirit of Hungary, on course for an excellent eighth place, is in regular contact with his team, his family and knows the legions of Hungarian media and friends await his presence.

Eric Bellion, some 900 miles behind, is in energy conservation mode as he is struggling with engine and charging problems on CommeUnSeulhomme. 360 miles south of him, Conrad Colman needs to make his final routing decisions to Les Sables d’Olonne driven by the need to protect his tired boat and equipment and resist any temptation to try and save hours or even a day as he seeks the best way to deal with the very active low pressure systems crossing the Atlantic at the moment. Meanwhile, in 14th place Rich Wilson can finally contemplate his final 18 or 19 days left at sea after crossing back into what he calls his ‘home hemisphere’.

Wilson on Great American IV crossed the Equator last night at 1816hrs UTC. “Enfin as the French would say,” Wilson quipped as he watched his navigation instruments pass over the famous ‘seven doughnuts’, 00.00.000 becoming 00.00.001N in a matter of seconds. “Seventy eight days in the southern hemisphere. I remember musing going south what the challenges and adventures might be that we would solve or not solve before we headed north across this line again. We are finally here again. Back into the home hemisphere heading for Les Sables d’Olonne.”

Speaking to Vendée Globe HQ this midday, Wilson said: “It took quite a while to get here, that’s for sure! Yesterday, we got almost to the line and then got north winds, so we were beating back up to get to the Northern Hemisphere. It’s a little trying and right now it’s very light. The high has moved a little bit and taken the pressure off the trade winds, so the ITCZ has moved a little way north. So we have a little further to go to get to the other side of the Doldrums. It’s a nice day outside. We have started to prepare for the trade winds. I’ve furled up the genoa and put that away. I’m pretty tired, but we’re making progress. The South American coast is very long and we had a couple of episodes when we were completely becalmed and going in circles. It was very discouraging. You work harder in those conditions for just a few miles than you do when you have strong, steady winds. I’m sure it was the same sort of situation for everybody, so it’s hard to get into a regular sleep pattern. I’ve been checking the boat. We have a few things on our checklist we look at every day. Ahead there are some very strong winds. It may moderate by the time we get there, but the winds will still be fairly strong. I hope we don’t have anything like the current winds. I imagine another two weeks. At this point, the goal is to get there safely and not make any mistakes with the boat or yourself, making sure you don’t get hurt or anything like that. I’m looking for my first meal back at the Buffalo Grill, but I don’t know which day.”

Nandor Fa is expected during the early hours of Wednesday morning, the skipper himself today suggesting it may be closer to the middle of the morning. 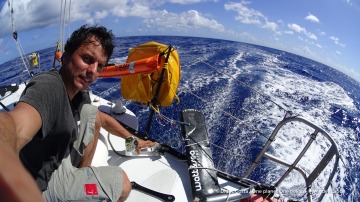 Didac Costa (One Planet,One Ocean): “The trade winds push us at constant speed towards the Equator now, and an area of variable width, where the south-easterly trades of the Southern Hemisphere converge with the NE trades of the Northern Hemisphere. The weather forecasts there are not really useful. You can move suddenly from zero wind to a violent squall. In addition to the wind maps, we look at infrared satellite photos and use a recent technique that allows us to deduce the prevailing wind by analysing the surface waves. And we also use intuition to find our way out… After this obstacle, the NE trades await us. If you have followed the route of the other boats in the Vendée Globe, you would have seeing that after the Equator instead of trying to go straight towards Les Sables, they made a big detour around the Azores anticyclone. I broke the support of the starboard hydro-generator yesterday and the rail where it is hold in the transom has also been damaged. Fortunately, it is interchangeable with the port one, which is the one that is working now. Anyway, I should have enough diesel (40-50 litres) to charge the twin alternator we installed in Les Sables.”

Windy conditions in the North Atlantic