Home News Roura in his own words

Alan Roura, the youngest skipper ever to compete in the Vendée Globe, finished in Les Sables d'Olonne this morning in twelfth place. In spite of not sleeping for four days because of the shipping in the Bay of Biscay and the light winds, he was ready to answer questions from the many journalists present on the pontoon an at a press conference. He explained how his childhood dream had come true and how he remains impressed by the former Superbigou.

“When I set off I thought I’d break something or finish last and in fact I found everything I was looking for. It’s like Christmas and birthdays for ten years have come all at once. I haven’t yet come to grips with what is happening. I dreamt of this moment when I was small.”

“She’s an old boat and I don’t have that much experience of ocean racing, so I feel really proud. This is a victory for the team and the sponsor, for us all, but with this great finish, this is my victory.”

“I wanted to share what I really felt throughout the round the world voyage. I didn’t want to hide anything. I talked about how I was feeling down at times to show that it isn’t always that easy. But when you want it do it, you can. I think I managed to make people dream and feel good this winter. Seeing so many people in the entrance channel was the reward for that. It proves that a lot of people were following and a lot of Swiss people. There were lots of good moments and lots of bad moments. Even before I finished, I knew I wanted to come back again for the 2020 Vendée Globe. This is the greatest and hardest thing in the world. 105 days alone in 4 square metres without anything.” 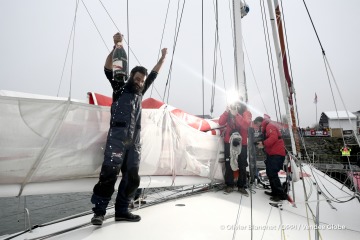 “The finest moment was Cape Horn, because every sailor dreams of that. The sight of that rock will stay with me. You keep saying you have done the hardest part. The Pacific is harder than the Indian and the Atlantic was the worst part with the trade winds being difficult with lots of calms off Brazil. It was long and hard on the nerves.”

“When we set out we didn’t have to time to do everything we wanted. There was the collision with an unidentified floating object. I pulled the winch off its base, but the boat is magical. She is incredible and will remain Superbigou.”

“Eric (Bellion) and I got to know each other. We were waiting for a low together just after Christmas and thought we might as well chat. Even if we were racing against each other we created relationships with Cali, Rich, Eric and Fabrice that will stay with us. They have the same desires, the same passions.”

“The Atlantic was quite intense with a series of islands. I had a communications problem, so didn’t have all the weather files and I didn’t know where the others were, but I saw Enda and Didac and Destremau near me, so I thought then I’d go for it. I took a southerly option, which allowed me to leave the Atlantic behind. People talked of a long swell and surfing, but the south was very tough. In the Indian, you think of everything that happened in previous races. The Pacific was even worse. It was the ocean that frightened me the most, but that I did best in.” 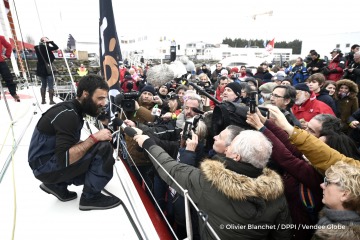 “We hadn’t planned it, but we saw that we were close together at Christmas, with a huge low ahead of us. We weren’t there to win the Vendée Globe but to have a story. We all eased off. It wasn’t something we talked about, but we were all there together. On New Year’s Eve I was at the furthest point from land and I said to myself that now wasn’t the time to break anything. It was the next day that I hit the UFO and the rudder stock broke and water started coming in. It is a bit complicated to explain, but I managed to get the rudder in place. That’s when you can say that you are a real sailor.”

“It’s not easy every day. You are all alone. Even in prison, you see other people. Here we have three months in a cell, like being inside a washing machine, but it’s so fantastic. You wonder when you’ll ever be able to experience that again. Being alone is hard, but that’s why we do it.”

“The Mini is the best school for ocean racing. I hadn’t done that many races before, just like Eric Bellion. The Vendée Globe is a race for sailors, rather than ocean racers.  I don’t see myself as a professional racer. It is simply my passion. Your career can stop from one day to the next. You have to rely on sponsors. Even the most experienced find it hard to find a sponsor. I didn’t take part because I was the youngest, but because I got this boat.”