Conrad Colman is now point his bow towards Les Sables and has accelerated this morning as the wind has shifted and strengthened. At 0800hrs UTC he was 200 miles from the finish progressing at around 6 knots. Last night the skipper of Foresight Natural Energy sent this message inspired by Homer.

“But I desire and I long every day to go home and to look upon the day of my return.... for already I have suffered and labored at so many things on the waves.” – Homer. From ancient Greece through the entirety of man's history at sea to modern day, Homer's words ring with a timeless truth... sailors and adventurers suffer in their labours upon the seas and from the moment we depart the comforts of our lives on land we yearn for them again.

The wind has died. The one proud mainsail drags lazily back and forth across the cabin top. Even the rippling laughter of the wake down the side of the hull has dulled as Foresight Natural Energy lethargically crawls across the dark disk of the horizon. The bright orange jib is the only flash of colour in a quiet world where a dull lead coloured sea lolls under a pewter sky. If variety is the spice of life then today's sleepy progress is a stark contrast to the brightly lit days following the passage of a storm where we threw tons of spray into the air and carved an arrow straight white furrow across a sparkling blue sea.

Surrounded by such an environment I can't help but be contemplative and consider the improbable journey has has seen me girdle the globe where I now sit within 250 miles of the finish. The path ahead to Les Sables are just the last few miles on a journey that has taken 10 years and three laps of the planet and has offered up enough physical, mental and emotional challenges to last a lifetime. I left New Zealand for the USA in 1999 seeking academic rigour and a way to connect with my late father's homeland. I left the mountains of Colorado for the mountains of the world's oceans in 2007 seeking adventure and opportunity. In both cases I got more than I bargained for!

I have been touched by the messages of encouragement I have received during the race, especially after the dismasting, but I have also been surprised by your generosity of praise. I am not naturally gifted in sailing or in mechanical knowledge. At best I'm excessively motivated to compete in and complete this race. All the skills I have put to use during this race I have learned during my journey through sustained curiosity and a wide spread of jobs to keep food on the table and my career moving forward. With the same dedication and attitude anyone can do the same... not necessarily the Vendee Globe because thankfully that's not everyone's cup of tea but countless adventures, artistic endeavours and business challenges await. 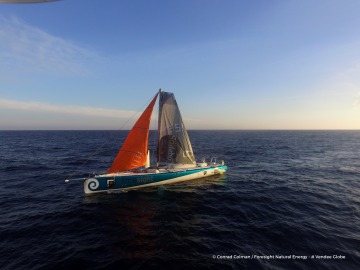 At the start of the race I talked about the idea of "What is your Vendee?". I didn't follow up on it because I got a little carried away with my own Vendee but I would like to return to the idea. I hope that the example I have shown can inspire you to embrace your own big challenges and not to be afraid of reinventing yourself around the pursuit of a challenge that is big and scary and seems utterly impossible from where we are today. Know too that my Vendee Globe is not the story of individual triumph even though when I cross the finish line (finally!) I'll be standing alone on the foredeck. I couldn't have done it alone, from preparing the boat with my small team, creating the campaign with my wife or crossing the start line with the Foresight Group. Your messages have helped too! The Vendee Globe is a team sport dressed in solo clothes and the fact that we're stronger together than alone remains true.

However, there is another timeless truth, from Odysseus to the Colman household. As soon as the bedraggled sailor is reunited with loved ones and the home hearth, it is never long before first the eyes, then the body, are cast out to sea again in search of the next adventure!