The Dutch skipper has less than 600 miles to go to reach Les Sables d’Olonne, but is not likely to finish before Thursday, when he is expected to take seventeenth place in the eighth Vendée Globe. Pieter Heerema has been forced to slow down and almost come to a standstill to let a storm pass with heavy seas developing in the Bay of Biscay.

After the top racers in January and the adventurers in February, we are going to have to wait until March for the final two competitors in the Vendée Globe, Pieter Heerema (No Way Back, 17th) and Sébastien Destremau (18th). The latter aboard his TechnoFirst-faceOcean, the tail-ender, should take the final slot on around 9th March. Sébastien Destremau now has less than 2000 miles to sail to reach the finish off Les Sables d’Olonne (1973 miles to be precise at 1400hrs UTC) and is currently averaging around ten knots to the south of the Azores. This afternoon, conditions remain favourable for him with the NE’ly trade winds allowing him to clock up almost 200 miles in the past 24 hours. But in the not so distant future, it is looking more complicated, with ridges of high pressure and light winds to cross before thinking about the coast of Portugal and Spain and finally the Bay of Biscay, the final hurdle before the conclusion of this eighth Vendée Globe next week.

No Way Back hove to since midday

For Pieter Heerema, the problem is the exact opposite. There is too much wind and the seas would have been too heavy for the Dutch skipper, had he not slowed down and in fact stopped at midday by heaving to. The reason is clear for anyone on France’s Atlantic coast this afternoon with severe gales currently blowing. The front is generating winds averaging forty knots with gusts in excess of fifty, but more importantly some nasty seas with 7-9m high waves. “Pieter was a bit ahead of schedule for passing Cape Finisterre,” explained Antoine Mermod, the team manager for No Way Back. “He is itching to finish and get back to Les Sables, but today, he had no other choice but to wait for more manageable seas. He is planning to round Cape Finisterre tomorrow some time between 1000 and 1500hrs and should be some way off the coast.” 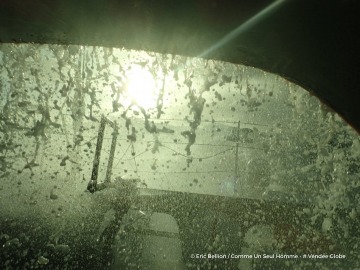 Meanwhile, Pieter Heerema is having to remain patient just under 200 miles from the NW tip of Spain. He may set off again late in the night. In any case, the final stretch is going to be rough, as after the winds ease tomorrow, another front is expected to cross the Bay of Biscay on Wednesday afternoon and the seas will remain rough. However, by Thursday the sea state should be calmer (“it’s the only pleasant day this week!”) allowing the Dutch skipper to complete his first solo round the world voyage in around 116 days.

This is not the first time a sailor has been prevented from advancing in this Vendée Globe, and more or less coming to a standstill to let the worst weather go by. That was the case for Yann Eliès in the Southern Ocean and this slowdown saw the skipper of Quéguiner Leucémie Espoir give up all hope of catching the frontrunners. Pieter Heerema is expected to spend another three nights at sea before entering the harbour in Les Sables d’Olonne around midday on Thursday. “Pieter is feeling fine and knows that this is the only reasonable solution,” added Antoine Mermod.