Meeting with Nicolas Troussel, skipper Corum L’Epargne
Date of birth: May 11, 1974
Place of birth: Morlaix
Home town: Fouesnant
Further education professional career outside sailing: I have my bac bit no other educational desire other than to sail

In the beginnings
Your first sails: where, when, under what circumstances:
A cruise to Jersey on the family’s boat. I was a few months old. I don’t have any memories of it at all but my mum has a photo.

How and why was your passion for ocean racing born?
Very early on, really. I knew that I wanted to sail, to make my career on the sea. But at that stage ocean racing did not seem to be financially in reach. If there was one thing that got me on the path it, it was the Solo Le Telegramme (talent support programme, Ed note) which made it possible to have a Figaro for the following season.

When and why did it become your career?
When I won Solo Le Telegramme, ahead of talented guys as talented as Charles Caudrelier and Armel Le Cléac’h. There was a spirit of camaraderie and competition between all of us friends in Morlaix Bay with Armel, Jérémie Beyou and others.

A result or experience that you are most proud of?
Without doubt, my two overall wins in the Solitaire du Figaro. The first was special: I had really gone out on my own several tens of miles away from the peloton. When I arrived in Birvideaux, which was the first course mark since leaving Spain, I noticed that I was completely on my own out on the water. I really didn’t know if I was first or last. It wasn't until the organization's helicopter came over me that I realised. I was six hours ahead of the pack. I was going to win the stage and set myself up for overall final victory.

Tack, tack.
What is your outstanding quality in life? The hard work that I can put in my projects, the will to get to the finish of everything and with it a certain perfectionism.
Your main weakness in life? I sometimes find it difficult to communicate with my group, to say the things that I would like to put have on the table.
If you were an animal? No idea, I have never asked myself that question.
If you were a plant? No idea, I have never asked myself that question.
If you were a movie? I am going to say La Septième Compagnie. It is fun with my kids.
If you were music? Music with a female voice. Previously, I would have been more rock or jazz but as I get older I appreciate more and more classical.
Your favourite colour? Corum blue, of course.
Your dream of true happiness? Simply to finish the Vendée Globe in good shape, me and the boat
Your hero in life? Coluche. Today we miss him
An aphorism?  Nothing really…..
If you weren't an ocean racer, would you be? I was a good tennis player, but I think that anyway, I would have ended up working in on the water in sailing.
VG 2020
Your ambitions for the VG 2020: First and foremost, finish it. Then I run with performance goals, but I don't pretend today I will win it. My ambition is to arrive in the best possible position by after I have given everything I can.
Weakness (what would prevent you from reaching your goal, apart from a breakage): I do not know. I don’t feel like I have a real weakness.
Your best weapon: I am not sure that the Vendée Globe is the appropriate race to make a "Troussel". I hope my lethal weapon will be my boat.
What would a successful VG be for you? To finish the Vendée Globe is not bad.
What do you want to share during your race? I like how Jean (Le Cam) did on the Transat Jacques Vabre. There is no way of imitating him, he has his own style. But to tell the whole story of life on board, to post videos that show the atmosphere is essential.
Three images you have of VG: The capsize of Philippe Poupon during the first edition, the finish of Michel Desjoyeaux in 2008 and thirdly the descent outbound of the Les Sables d'Olonne channel by the competitors of the first edition… Everyone considered this race insane and the biggest question was whether there would be enough sailors at the finish to make a podium.
Which skipper inspires you? When I was young I had a few idols, but today I don't really have a one stand out. Working with Michel (Desjoyeaux) is very inspiring. Jean Le Cam, well I got to know him and appreciate his way of sailing. At his side you understand a lot about his approach to the sea and ocean racing. And I would also mention Armel (Le Cléac’h) and the Banque Populaire team for their thoroughness and their way of leaving nothing to chance.

You wouldn't go around the world without? Podcasts ... It's a great way to get away for a few moments, to release the pressure from time to time. 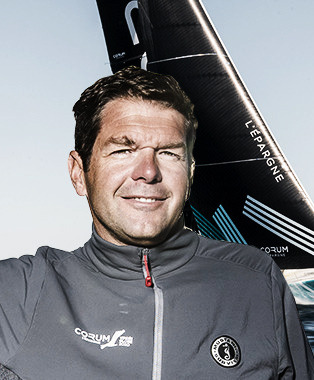