Behind the radiant smile there lies a resolute, talented fighter. Clarisse Crémer, the skipper of Banque-Populaire X may be an IMOCA and Vendée Globe bizuth, a rookie, but she is a fast learner and has a great mentor in defending champion Armel Le Cléac’h.

Studies and career path outside of sailing:
"After obtaining a Bac S at Rueil-Malmaison (Hauts-de-Seine), I joined a 'prep' school in Sainte-Geneviève in Versailles. Then, I continued my studies at HEC (business school, ed note) before founding a start-up with my brother Kazaden.com, which specializes in booking outdoor adventure trips, vacations and experiences.”

Your first sails: where, when, under what circumstances?
"It is the story of my childhood holidays at my grandparents' house, between Toulon, Jersey and Brittany. We used to spend our holidays out on the water playing with my brothers and sisters. We were constantly covered in sand and salt. I learned all about the outdoors and that was my introduction to sailing. When I was 12 years old, we took part in the 4 hours of Carnac aboard a small catamaran. It was mad, back then I felt like I had done the Vendée Globe.”

How did your desire to race offshore develop?
"To unwind after very heavy weeks with my start-up, I used to go to Brittany at the weekends with Tanguy Le Turquais, my friend, who loves to sail. After having settled down with him, I supported him on the race pontoons especially when the Mini-Transat finished in 2013 and 2015. There was something special that clicked with me and it was great to see these sailors sharing their great adventure. We saw a real connection between them, a strong bond and it made me want to experience it from the inside.”

When and why did it become a career?
"I never had a definite career plan. At the end of the Mini-Transat, I had the chance to follow up and do the Transat AG2R alongside Tanguy (Le Turquais). Then, I went on to do the Solitaire du Figaro and there I discovered another world which involved such intense preparation, and how hard it was training during the winter on the water and in the cold. Then I was asked by Team Banque Populaire to take on the Vendée Globe. I have always appreciated my competitive spirit which burns inside me with a constant desire to progress and give it everything.”

A result or experience you're most proud of?
"My participation in the Mini-Transat in 2017 was, for me, a revelation. It was one of the few memories at sea, on board where I didn't even think about the finish line. I was just so happy to be at sea. I had stopped inquiring about the rankings. And at the finish, my surprise was total: I discovered that I was on the podium (3rd and 2nd on each stage). Psychologically, I had prepared myself to be the last. I just couldn't believe my eyes!”

Your main quality in life? "I get very excited.”
Your main flaw in life? "Sometimes I get a little bit ahead of myself and says what I think sometimes without thinking first and it can offend people.”
What if you were an animal? “A laughing seagull”
What if you were a movie? “The Grand Budapest Hotel, by  Wes  Anderson”
What if you were music? " 'Born in the USA' by Bruce Springsteen. I listened to it on the Mini-Transat:  it doesn't make sense but it made me want to be a champion!”
What color? “Blue”
Your dream of happiness? "I want to have as many happy moments as possible!"
Your hero in life? "My dog (laughs)! No, I'm joking…. Joker!”
If you weren't an offshore racer what would you do? “a Landscaper” 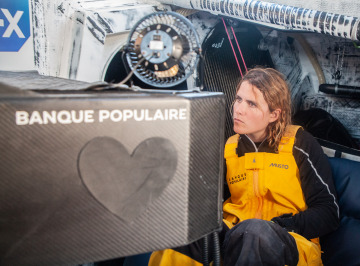 © BPCE / Martin KeruzoréYour ambitions on the Vendée Globe 2020:
"To take on this challenge with Banque Populaire is to back my ability to learn fast and gather all my energy and all the skills from the team to succeed. I feel I can give everything, to have the stamina and to face the difficulties to spend three months at sea and cross the finish line at the Sables d'Olonne.”

Weaknesses (what would prevent you from reaching your goal, apart from damage):
"Like all rookies we have the lack of experience to contend with. We don't know what to expect, we've never been to the southern oceans. Also, even though I'm improving and I've trained well, I'm not necessarily the most technically adept on a boat.”

Your key weapon:
"Constantly telling myself how lucky I am to be on the water and to be a in such a privileged position."

What would a successful VG be for you?
"The dream is to be able to finish it, to get through this round the world race and to be able to share the passion with all those who have contributed to this beautiful adventure."

What do you want to share?
“What gives me so much energy is all the feedback from the people who follow us. It allows them to take time out to share their own salty, cold parenthesis during their days and to escape their lives for a few minutes. Hopefully they can be filled with positive emotions, in the office, in the hospital or at home, and that gives meaning to our adventure. And it makes me want to share everything in the most authentic way possible, the good times as well as the bad times."

In three words, the VG for you is:
“A great adventure!”

Three standout images you have of Vendée Globe:
“ Armel's tears at his finish in 2016. He made a name for himself looking back: when you get to know him, you realize all the emotions he had to go through before he won.”
“Ellen MacArthur at the top of her mast. She is a 'warrior', she was so impressive from start to finish despite all the difficulties she encountered.”
“ There are also all the videos that illustrate fun, light moments. We see the pleasure that skippers enjoy, regardless of their ranking.”

Which skipper inspires you?
"Sam Davies"

You wouldn't go around the world without?
"Some pictures of my family and some great food!"

Environmental/scientific actions:
"Even though we don't have a specific program in this area, I try to be careful on a daily basis. For example, plastic bottles on board are banned.”