What Foils Will It Take to Win the Vendee Globe

While it is highly likely that the next winner of the non-stop solo round the world race will be aboard a foiler, what type of appendage will be able to deal with all the problems over more than 21,600 miles? If we look at the IMOCAs with foils added in 2016, those fitted with new appendages and the latest generation of prototypes, we can see some huge differences in terms of the design, which are bound to affect the way the boats are sailed… Which approach stands out in this wide range?

With more than thirty boats setting off on 8th November, nineteen will be able to take advantage of the gains offered by foils, particularly when sailing with the wind on the beam at between 80° and 120° from the real wind, which is the prevailing point of sail in the round the world race starting and finishing in Les Sables d’Olonne. The weather conditions at that time of year are relatively stable at least after the Canaries: NE’ly trade winds turning easterly to the south of the Cape Verde Islands, the Doldrums, SE’ly trade winds turning easterly from the Equator to the latitude of Salvador da Bahia, north to NW’ly winds down to the Cape of Good Hope, followed by a series of low-pressure systems (NW’ly winds backing westerly and then SW’ly) to Cape Horn… After that, things are less certain at the end of the year as they make their way up the coast of Argentina, past Brazil and into the North Atlantic.

Lift and stiffness under sail
In general, we can say that reaching between 80° and 120° prevail in the round the world race when sailing anti-clockwise. It is in this configuration that stiffness or the ability of the boat to use a large sail surface to move quickly without heeling over too much because of the wind is essential. Right up until 2014, IMOCA class rules were based around the idea of a certain amount of liquid ballast (tanks filled with seawater) to compensate for the thrust from the wind. After that date, the volume allowed was reduced for the new prototypes, which led designers to come up with a new idea to increase the capacity of the boat to carry a lot of sail or make her stiffer. We must not forget that these boats are powered by the sail surface.

That is why the VPLP team in conjunction with Guillaume Verdier and his team came up with the idea of adapting foils for these monohulls. A lot had been learnt about these appendages thanks to the 2013 America’s Cup, when 72-foot catamarans flew above the water even when carrying out manoeuvres to gybe or change tack… However, the idea of flying aboard a monohull sailed by a solo sailor around the world had still to be answered: was it possible to fly over the water for two and a half months?

The designers came up with boats that could sail without their foils (and which only supported 30% of the weight of the boat) in case they broke: it was that generation with Banque Populaire VIII and HUGO BOSS 2016, which dominated the eighth edition, but only six monohulls were fitted with foils. These appendages however offered extra power and it was impossible for the boats with daggerboards to keep up the pace.

This was just the start: the foils were relatively short and their shape enabled the boat to be lightened by around three tonnes, while they were solidly built to limit any deformation under load. 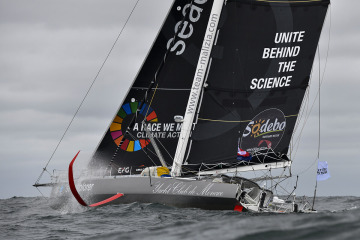 Three main types of foils
Now, four years on, it is pretty much a given that the boat which will win this ninth edition of the Vendée Globe will be a foiler. In the intervening period research on the shapes and profiles have greatly evolved. From the first generation “reasonable” versions the designers have moved on to much more efficient and extreme versions which make it possible to support 100% of the weight of the boat so it can now properly “fly" above the surface of the water for sustained periods.

These appendages have been considerably lengthened, the profiles have become more sophisticated and the deformation under load of the latest self regulating foils can be up to one metre.  The power gained is considerable, evidenced by the fact that at the best angles (90 ° -100 to the true wind), the 2016 versions "hit" around 25 knots of boat speed, now the IMOCA monohulls of that previous generations fitted with new generation foils reach 27 knots while the latest builds can exceed 30 knots .

Speed differences are especially potent between 80 ° and 120 ° to the wind, the VMG gains downwind and especially now upwind or close reaching i.e. 45 ° to 60 ° but less so at much wider angles downwind, that is more than 140 °, where the differences with the conventional daggerboard  boats is less pronounced.

But what also makes the difference between the latest prototypes and their predecessors even equipped with 2020 foils, is also the shape of the hull is now designed specifically designed to work in concert with the foils, performance also enhanced by the overall reduction in weight for the new 2020 gen boats. Bear in mind retro fitting foil wells and foils to existing designs can add several hundred kilograms ... 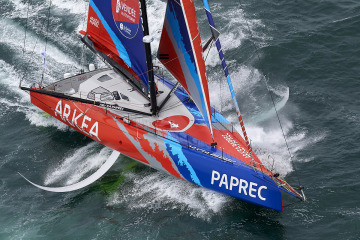 Among the 2020 “foilers”, two designs are possible: “C” shaped appendages such as HUGO BOSS, Arkéa-Paprec, Corum L'Epargne and L'Occitane en Provence, and then there are the “L” foils on  Charal, LinkedOut, Apivia or PRB, MACSF, Sea-Explorer - Yacht Club de Monaco. The C form are especially quick at top end broad reaching, less so upwind, and these appendages can "retract" completely so as not to be damaged by waves in heavy seas. The L form are said to be more versatile, a little less efficient reaching, but more efficient at VMG angles (upwind and downwind).

On paper it is the latest generation foilers that have the most potential, followed by the monohulls optimized with 2020 foils, then the 2016 boats and the lightest dagger boards. But remember that this non-stop solo round-the-world race is always full of uncertainties and unknowns. Right now it does not seem possible to "fly" all the time without working continuously on the foil settings. Certain weather and wind phases will see key advantages come into play and big differentials open up, but will they prove conclusive and contribute to overall victory? We will get our answer in January 2021.