At a time when there is a greater need than ever before to understand what exactly is happening to our oceans so we can target the most efficient preservation and sustainability initiatives, these projects which the Vendée Globe skippers are taking part in are vitally important.

“Whenever there is a chance to participate in such projects and to take equipment on board, I do so,” highlights Alexia Barrier (TSE - 4MyPlanet), who was one of the first to recognise the problems and so scientific research has been at the heart of her projects for ten years. “I understand that we sailors who cover the oceans and pass through places where there is absolutely no one else for thousands of miles,  and where there is no meteorological data, we can contribute to science. We can make our boats useful in deploying devices that immediately become very important sources of information."

Data collection from the oceans along the round the world course is an objective that Barrier and twelve other skippers have taken on. They participate in a collaboration between the IMOCA class, the Vendée Globe and the International Oceanographic Commission (IOC) of Unesco and the World Meteorological Organization (WMO).

Through OceanOps, which coordinates a network of 10,000 meteorological-oceanographic observation devices scattered across the world’s oceans these two international organisations allow more comprehensive monitoring of the world's waters. It is a big initiative into which the data facilitated by Vendée Globe teams is very useful. Plying some of the most remote oceans of the world the data from the IMOCA fleet is highly valued. 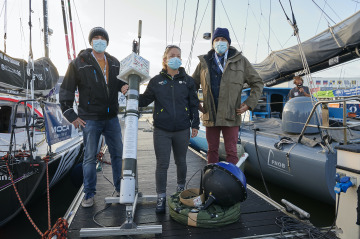 Two types of devices are deployed by the skippers. There are ten drifting weather buoys. They are slowed and stabilised by a sea anchor. These buoys measure surface temperature and current and atmospheric pressure. This data, essential for real-time weather forecasts, is used for routing ships around the world, but also for preventing and cleaning up pollution in the event of oil spills. These ten devices will be dropped in positions established to meet the needs of Météo France, in particular closer to the equator.

This ninth edition of the Vendée Globe will also be an opportunity to deploy three new floats to complete the Argo network, which has been providing surveillance of the oceans since the 2000s. These super-sophisticated devices dive to 2,000 meters every nine days to rise and measure the salinity and temperature of the water column as they come up. Once back on the surface they transmit this data to satellites. Each float can repeat this cycle 150 times.

Lab coats under their foulies…
As well as these buoy deployments, three skippers - Fabrice Amedeo (Newrest - Art & Fenêtres), Boris Herrmann (SeaExplorer - Yacht Club de Monaco), and Alexia Barrier – also have on board thermosalinograph machines on board, a kind of mini laboratory that collects data (temperature, salinity and CO2) all the way along the race route, even in the most remote and wild areas of the globe.

"I already have good experience in this collection work and, given my small budget, I opted for a low cost device set up from little bottles and a probe loaned by Ifremer. Each week of the race, I will take 150 ml of water in a small glass bottle that I will store with the usual precautions in the boat. I take just under 30 vials on board,” explains Alexia “This edition of the Vendée Globe proves we can play an important part in these kind of operations. I would like all the boats in the Vendée Globe to be equipped with sensors in 2024, because this is essential work and the more data we can collect from more different areas the better we can proceed with the key initiatives. In fact we know space much better than the ocean. But the ocean, which is the source of life, is really in danger. If we do nothing, in 30 years there will be only jellyfish and plastic in the water”, emphasises the skipper of TSE - 4MYPlanet, pursuing a global cause that is dear to her.

3 Argo floats are deployed during the race, in order, depending on the course :

The 10 weather buoys deployed during the race, in the following order on the course :

Note that two skippers - Fabrice Amedeo (Newrest - Art & Fenêtres) and the Japanese Kojiro Shiraishi (DMG Mori Global One) – take specific equipment to filter seawater. Their samples taken each week will allow their return to land to measure the content of microplastics and better analyze this pollution and the damage it generates.