Much as he would love to be in Les Sables d’Olonne to see his two newest designs Charlie Dalin’s Apivia and Thomas Ruyant’s LinkedOut off the dock to take on the ninth Vendée Globe, French designer Guillaume Verdier is locked down in New Zealand awaiting the start of the America’s Cup as lead designer for defenders Emirates Team New Zealand. And the Verdier designed Ultime Gitana is on standby for a Trophée Jules Verne attempt this winter. A humble team player Verdier still recalls the burning pride in designing his first chainplate…

So Guillaume you are running into a pretty much unprecedented period, pitching to win the Vendée Globe with your two new designs Apivia or LinkedOut, defend the America’s Cup with Emirates Team New Zealand and challenge for the  Trophée Jules Verne with the Ultime Gitana?
"It is a bit too much! I don’t particularly enjoy having too much on at the same time. But it is a coincidence.  The weird thing is I am here and not in France, for example, but that is OK because I am not on the boat! They don’t need me now. The weird thing is that all the guys working with me like Hervé (Penfornis) and Romain (Neyhouser) are fantastic people, they have done so much of the job are so talented. It is not down to me. 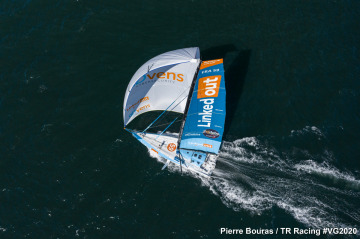 Did you ever set out with ambitions to win these pinnacle events or has it just happened step by step?
I never thought I would be in this position. Never. I remember the first thing I designed, it was a chainplate on a boat, I think. I was so very proud. And then slowly, slowly you get used to things. Some is down to luck, some to work, some to meeting good people and having a good spirit. I was passionate always in what I did, obsessive, even. When I was a student I read all the books, and learning and I just had this fire in my belly to learn and learn, composites, fluids, sailing boats, I just wanted to learn it all, fast when I was studying. I have always been like that. It is my passion. When I was young I was obsessive about go-karts and mechanics. That went away. Now I am also passionate about nature and how things are growing and moving.

What do you think of fleet for this Vendée Globe?
It is interesting. It is like usual with the latest generation which has been modified and the new generation. Like Sam Davies I would love her to win, she is a girl, we did a good rehabilitation project, she is ecologically and socially aware, she has a good sponsor. It would be great to have her up front, a good message to the world in these times, the opposite of Trump.  What is design is design, I just hope nobody breaks the race is the race, you just don’t know. It may well be the best boat is L’Occitaine.

Would you go down the scow route in future?
Well I did look and went that way and did two or three studies, but maybe I did not manage to do it as good as this boat. That is what I don’t know. I went that way and found if you are not in the correct trim it is difficult, but I did not find the allround performance. But then maybe I did not design it properly. Maybe Sam Manuard made it better. It is interesting

It is great to have more designers in the race?
It is way better, There is no point in being on your own. It is not interesting to have only one group of boats. A fleet of Farr, a fleet of Verdier/VPLP, a full fleet of Finot Conq, it is not that interesting. I think it has often been down to sponsors asking ‘who is the guy winning all the races?’ It is good to see Sam Manuard in, maybe taking a bit of risk. Diversity is good. And having two boats for me is good. Having six is a bit of a nightmare!

You have enjoyed these two different projects?
Last time with VPLP we had three designs really and this time we have two designs, one came out of the project for the Volvo Ocean Race which we developed for LinkedOut and Apivia has been great with the team from MerConcept. I know all the guys and it has been really nice because having a collaboration you share ideas and you share opinions and then it ends up with a different boat and everyone is happy in the end. They try to understand your knowledge and I try to understand where they are coming from. It is not even as if you are thinking ‘what they think is wrong’ and you let it go……they wanted to do a cockpit which was like cave like Alex Thomson and they went quite far and then they said ‘this is not where we want to go’

You don’t like ‘the cave’?
You need to have good forward vision and you need accessibility. It is good to have the centre of gravity low, but living in a ‘cave’ down below, if you need to be reactive, got go out fast is not easy and in the sun it will be really, really hot.

Are your boats more ready than last time?
They are way more ready than last time. We have not had any structural issues. Remember last time at the Transat Jacques Vabre we had a few structural issues with two boats and we reinforced all the boats and as a consequence of that we came very late into the last sailing before the Vendée Globe. Well this time we have had no issues – well nothing major there is always a little bit here and there– and the Covid has slowed us all a bit for sailing. But on our side we have only had improvements, we have had no broken foils, no major broken structure. And so hopefully they have felt more confident. And the reason for that is we keep building on our (group’s) experience. We have a good finite element model which we keep on refining it. We know where things are fragile and I collaborate with people who do double checks, triple checks. Before I used to do it all myself. I take less risk. You can still break the boat, though. You take any pair of skis at the top of a big slope and you are a good skier, you can break the skis if you want, or a motorbike as a very good racer, or a car in Paris Dakar you can break it. It is a mechanical sport and you can break it if you don’t look after it.

But it is much safer with so many more load sensors and data measurement?
But there are still the exceptional event, an exceptional wave. That is the different with aeroplanes, they are predictable. We have the slamming. We expect to have up to 20-25 tonnes per square metre, that is more than force a wave is breaking on a dam. On one square metre you can have more than the weight of the boat. There is more to learn. It is a science. I studied it for my PhD and it is still quite unclear. It is not a fundamental science.

You are pretty conservative and risk averse?
I try to homogenise the structure. When a light structure is a structure which is even everywhere. You don’t want to be blue on red in terms of the finite element analysis, you want to be yellow everywhere. In some projects like Gitana we have a finite element analysis which is live when they are sailing. This is where we are going, we are not there yet with IMOCA 60s yet but it will come."