Violette Dorange : « The Vendée Globe is now a concrete goal »

Now 21 years old, Violette Dorange could be the youngest woman to line up at the start of a Vendée Globe. Aiming for the next non-stop, unassisted round the world race in 2024, the sailor from La Rochelle has acquired the IMOCA Hubert, the boat on which Jean Le Cam finished fourth in 2020. Despite her young age, she has a complete background. She has not missed a step: dinghy sailing, Mini, Figaro... Portrait of an ambitious new generation skipper.

Violette made her first tacks in front of La Rochelle in an Optimist at the age of 7. She then discovered the Vendée Globe with Jean-Pierre Dick, who shared the benches of the veterinary school with her parents. In high school, she entered a sport-study program where she sailed in 420, the boat on which she represented France in the world championship. Very quickly, she began to dream of offshore sailing. Jean-Pierre Dick advised her to launch a Mini 6.50 project. After a short year of preparation, she set off to cross the Atlantic single-handed on a 6.50-metre boat. The following season, Violette joined the Figaro circuit, which is renowned for its toughness. She stayed for three seasons: "Everything followed on from each other quite quickly. I took every opportunity. A fast career, but not a hasty one. Today, the young sailor is close to her dream, to take part in the Vendée Globe: "I have always said that I would do the Vendée Globe, but until recently, I didn't really say it seriously! Now it's a concrete goal. Resolute, she adds: "I'm doing everything I can to get there.

A boat, a technical team but no title partner yet

Such a project obviously involves finding partners, a crucial stage in which his father's help is invaluable: "My father loves setting up projects. He helps me with the administrative and commercial aspects. On the other hand, he never gets involved in the technical and sporting aspects. Although the first companies have already signed up, the title partner has yet to be found: "It's a bit stressful, but the most important thing was to have the boat to start training on, as there were very few on the market. Here too, the sailor wasted no time: she brought the boat back to France after the Route du Rhum - Destination Guadeloupe with the technical team. A fifteen day intensive training session in sometimes complicated conditions: "On the delivery, it was the first time I had sailed for several days in an IMOCA boat. Going from the Figaro to the IMOCA is a big deal... You change dimension! But any apprehensions quickly gave way to pleasure: "The first night, I didn't necessarily feel very comfortable, but then I loved it! It was very reassuring. It's a big boat, but it's more or less the same manoeuvres. There are procedures that you have to learn, you have to do things one after the other. In any case, the boat is superior to everyone else! And just because you're a big guy doesn't mean you'll do any better. 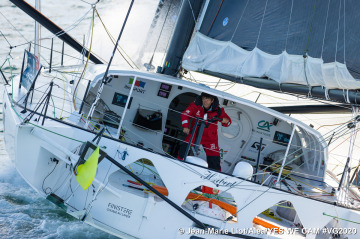 By hosting her project at Jean Le Cam's base in Port La Forêt, the young woman will benefit from his precious advice. The sixty year-old, who is also a candidate in the next Vendée Globe on his new IMOCA with straight daggerboards, will help her to take control of his former boat. "I already did some training with Jean last season. What surprised me a lot was that he trusted me right away. From the first training session, he let me do manoeuvres as if I were sailing alone. He wants to pass on his knowledge, and that's a chance!

Beyond the technical and sporting aspects, the sailor also has a great aptitude for communication. Very comfortable on social media, she admits that she takes great pleasure in sharing her adventures: "I love to talk about my project. I want to show what goes on behind the scenes, the preparation, the team... I have lots of new ideas! On Instagram, she already has over 10k followers and some of her TikTok videos have over 20k views! But Violette also wants to give meaning to her sporting projects. Since 2020, she has been involved with the Apprentis d'Auteuil, a foundation serving young people in difficulty. "I have created links with many young people. Today, I work with five establishments all over France. I really want to continue through my Vendée Globe project. A lot of ambition, a big heart, a bit of strictness and all that within a well-defined framework, wouldn't that be the first ingredients of a successful campaign?

Jean Le Cam, a new boat in the colours of Finistère and Armor-Lux