A lot of IMOCAs have been put back in the water over the past few days after weeks spent in the yard. Jérémie Beyou’s Maître Coq has been in the water for several days now with the two foils fitted on Monday. Immediately after that, Jérémie and his team set off to test the boat with her new appendages. 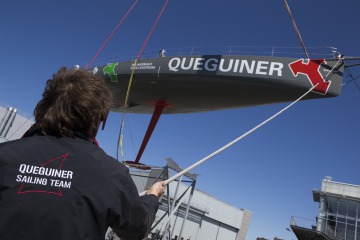 © Alexis CourcouxIt was on Monday too that Yann Eliès’s Groupe Quéguiner was put back in the water and underwent her righting tests. Groupe Quéguiner has spent four months in the yard with the steering system being completely replaced and the ballast tank layout being optimised.

Yesterday (Tuesday), SMA, Paul Meilhat’s IMOCA (François Gabart’s former Macif) was put back in the water after a lot of repairs were carried out on her after she was recovered after drifting for three weeks in the Atlantic.
Eric Bellion relaunched his CommeUnSeulHomme in Port La Forêt on Thursday 14th April. On the previous day in les Sables d’Olonne, Jean-François Pellet did the same with his Come in Vendée after two months in the yard.
After having her mast stepped last week, Arnaud Boissières’s La Mie Câline has been off training this week with her new sails. Arnaud intends to compete in the Armen Race in early May.

As for Bertrand de Broc, he will be relaunching his MACSF tomorrow (Thursday 14th April) in Lorient, after three months in the yard. In the same place on the following day (Friday) it is Thomas Ruyant’s Le Souffle du Nord which will be back in the water after her steering system was transformed with the wheel being replaced by a tiller and with her ballast tanks being rearranged. Thomas plans to take part in the Grand Prix in Douarnenez.

Further south, Stéphane Le Diraison is training for several weeks in the Mediterranean, before a solo delivery trip to New York.
In Port Camargue, Kito de Pavant’s Bastide Otio is still in the yard. Kito won’t be competing in the transatlantic races, as he has decided to do a lot of work on his boat, which won’t be relaunched until late May, meaning he will be able to take part in the Giraglia in June. 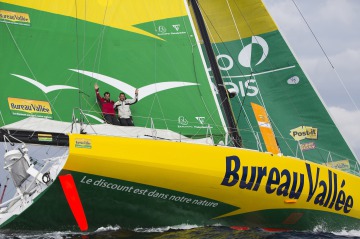 © Stéphane MaillardThe same strategy (no transatlantic races, but a lot of work in the yard) is being applied by Louis Burton, who is travelling around France to present his project. His Bureau Vallée is being smartened up until June at BG Race in St-Malo.

More than one transatlantic race

To better understand what is going on with 200 days to go to the start of the Vendée Globe, we need to look at their race programmes, as some still need to complete their qualification for the Everest of the seas. That explains why so many are registered for the New York-Vendée race, which will leave the Big Apple on 29th May with no fewer than 18 IMOCAs competing. To take part, they first need to cross the Atlantic to get there… Some are carrying out delivery trips, allowing them to test  and adjust their boats. Others are in race mode on their way to the United States, via the two solo transatlantic races: The Transat Bakerly, which starts from Plymouth on 2nd May after a prologue in St-Malo this week and the new "Calero Solo Transat", between the Canaries and Newport.

Already racing across the Atlantic 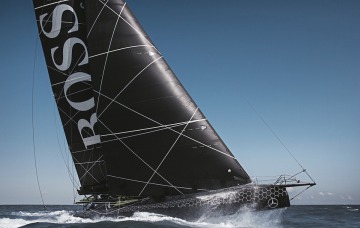 © Mark Lloyd / HUGO BOSSIn the sunshine in the Canaries, Alex Thomson and the team around the new Hugo Boss have set up their winter quarters in Puerto Calero. They are taking advantage of the exceptional conditions to train and optimise their foiling VPLP-Verdier designed boat. After arriving there on 9th April, the British team took advantage to greet the sailors, who set off on the first "Calero Solo Transat" to Newport: Pieter Heerema (No Way Back), Alan Roura (Un Vendée pour la Suisse). These two boats set off on 12th April, while Sébastien Destremau’s FaceOcean set sail three days later on Friday. The three boats risk being separated throughout the race, as Pieter Heerema, way out in front for the moment, has opted for the North, while Alan Roura has gone the opposite way heading due south down the coast of Africa… A huge difference in opinion. Pieter Heerema and Sébastien Destremau are registered for the New-York Vendée, while Alan Roura has not yet taken a decision, but it remains a possibility.

A delivery trip and race for The Transat

For the six sailors competing in The Transat in the IMOCA class, it’s time for the delivery trip to get to Plymouth for the start on 2nd May. While Paul Meilhat (SMA) and Sébastien Josse (Edmond de Rothschild) saw the clock ticking and will be heading directly from Brittany to Plymouth and the British sailor, Richard Tolkien and his 44 are already there, the other three competitors began their delivery trip in race mode yesterday. The Finistère offshore training centre came up with a start line for them to put them under race conditions from Concarneau Bay to St-Malo, where the prologue will take place for The Transat. So the fight is on already in strong NE’ly winds between Vincent Riou’s PRB and the two new foilers, Jean-Pierre Dick’s St Michel-Virbac and Armel Le Cléac’h’s Banque Populaire VIII.

While he is not competing in The Transat, Jérémie Beyou also decided to take part in this race exercise with his Maître Coq. These four boats are due to reach St-Malo on Wednesday evening after around twenty hours of sailing, which is bound to teach them a lot.

The Transat will also be a real battle with two of the top traditional IMOCAs, PRB and SMA, up against three new generation foilers: Banque Populaire, Edmond de Rothschild and St Michel-Virbac. This race is also a qualifier for the Vendée Globe, but in itself it is a legendary race, which they will want to shine in, as some other Vendée Globe heroes did in the past - Philippe Poupon, Michel Desjoyeaux and Loïck Peyron on three occasions.

See you in New York 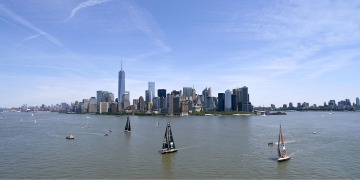 © Thierry Martinez / Sea Between the Calero Solo and The Transat, nine Vendée Globe hopefuls will be crossing the Atlantic from East to West to moor up at the foot of the skyscrapers in Manhattan to await the start of the New York-Vendée (Les Sables). Others, already out there training will be delivered there directly. That is the case for example for Morgan Lagravière and his new Safran, Alex Thomson’s Hugo Boss and Jérémie Beyou’s Maître CoQ. The same goal of training and fine tuning during this delivery trip to New York is hared by Tanguy de Lamotte aboard his Initiatives Cœur, Fabrice Amedeo and his Newrest-Matmut, Nandor Fa’s Spirit of Hungary and Conrad Colman. The same goes for Yann Eliès, who will be setting off with a short-handed crew on Groupe Quéginer (with three aboard) and Bertrand de Broc with his MACSF, which is also registered for the New York-Vendée, which is proving to be very popular. With no fewer than 18 boats registered, this will be the last big battle and the final major fleet race before the Vendée Globe.

To finish, some other candidate are working on their preparation for the Vendée Globe. The Catalan sailor, Didac Costa, for example, has just relaunched his boat in Barcelona. He will be setting out to complete his 1500 mile qualifier in the coming days. As for the American, Rich Wilson, he is in Britain preparing his Great American IV. As for the French, Romain Attanasio has just returned after six days of solo sailing in tricky conditions on his Sixième Océan. Next up, he will weigh the boat, carry out the righting test and continue to search forn partners to complete his budget. With a similar problem, Jean le Cam and a few other sailors are also busy looking for sponsors. They all have one goal: to qualify as quickly as they can to be in the best of shape for the start in Les Sables d’Olonne on 6th November. So in 200 days from now! 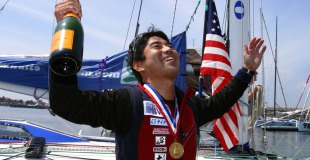 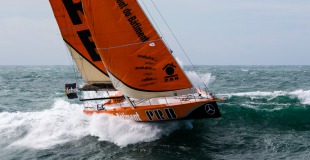 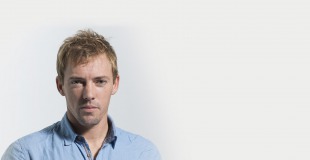