> News > Enda O’Coineen, the first Irishman in the Vendée Globe

“Everything went well at the launch this morning. We are now going to step the mast, set up the computer system and fit the new sails. Next week, Enda will start to sail her.” Marcus Hutchinson, who is giving his Irish compatriot a helping hand with the preparation, can relax. Everything went well during this highly technical, but also symbolic phase, which took place today in Port la Forêt, after Kilcullen Team Ireland benefited from weeks of work in the yard. No major modifications have been made to the IMOCA, which is none other than Mike Golding’s former Gamesa 3, an excellent boat, but she has undergone a major refit in collaboration with Mer Agitée, Michel Desjoyeaux’s firm. Among the many updates, the whole hydraulic system and engine have been worked on and all the electronics changed.

A colourful character (see his portrait and specifications to the boat in the Skipper page), Enda O’Coineen will be the first Irish sailor to compete in the Vendée Globe with the ambition of making it all the way round and of sharing his experience, in particular with the youngsters, who are part of the Atlantic Youth Trust, a educational sailing programme that he himself founded. We can be certain that this unusual sailor, who came third in the St. Barth-Port-la-Forêt race last year and worked hard to ensure Galway, his home town, would host the Volvo Ocean Race, will have a lot of supporters.

In Ireland in mid-July 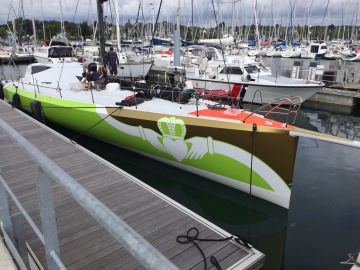 © Kilcullen Team IrelandAlready qualified, Enda O’Coineen is joining the list of skippers, who have to provide an IMOCA certificate valid for the 2016 Vendée Globe. He is in the same situation as Conrad Coleman and Kojiro Shiraishi. “We have already carried out inspections of the keel and mast, which are the hardest ones to do,” explained Marcus Hutchinson. “The idea is to move forward and carry out the other class rule checks and the 90 degree test, if possible on Friday.” Next week, Enda O’Coineen is due to get out there sailing Kilcullen Team Ireland. Then, in mid-July, he will deliver the boat to his home port in Ireland with members of his shore team. There, Enda will be able to carry out his training programme. “Depending on the conditions, he may sail around Ireland and may sail down to the Azores and back. But he will also need to take a breather and enjoy some time off, as he is also a very busy businessman.” An Irishman, a businessman and a very good sailor… A cocktail, which should do very well in the Vendée Globe. 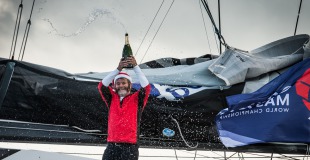 Irish sailor Enda O'Coineen a candidate for the Vendee Globe