The Japanese sailor, Kojiro Shiraishi (Spirit of Yukoh) has been strolling around the pontoon in Port Olona for three weeks waiting for the big day. On Sunday, he will become the first Asian to take part in the Vendée Globe. He can rely on the experience he has built up after sailing around the world several times.

How does a Japanese skipper end up mooring his boat on the Vendée Globe pontoon?

“Ocean racing isn’t very well known in Japan. I wanted to take part to publicise this fantastic race in my country, but also throughout Asia. I have two major goals in the Vendée Globe: I want to be the first Japanese sailor and even Asian sailor to take part and complete the Vendée Globe. My second goal is developing this ocean racing culture in Japan and in Asia. I attended the start of two Vendée Globes, in 2004 and 2008. This time I’m one of the competitors. There’s an incredible atmosphere on the pontoon. It’s amazing seeing so many visitors. Over a hundred Japanese visitors (sponsors and friends) are present in Les Sables d’Olonne this week. They are hugely impressed to see all the excitement.” 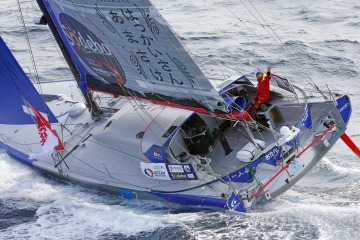 © Yoichi YabeYou have an interesting boat (Alex Thomson’s old boat, which came third in 2012-2013), which means you can aim to do well…

“I’m aiming for the top ten. There are lots of boats from the same generation as mine (a Farr designed boat from 2007), including some sailed by first class skippers like Jean Le Cam, Bertrand de Broc and Tanguy de Lamotte. I can’t wait to get involved in this race within the race.”

You’ve already been around the world twice with stopovers (Around Alone in 2002, the Velux 5 Oceans in 2006). Are you at all worried?

“When I was 26 I sailed around the world to and from Japan in 176 days. I was the youngest skipper to have completed this course. The Vendée Globe will be my first non-stop race around the world. My biggest worry was not making it to the start line. I had to find the funding and a good boat and then qualify… There are a lot of hurdles along the way to the Vendée Globe. But now I’m in Les Sables d’Olonne, I feel relaxed and don’t feel any worries about this race.”